(JTA) — When Benjamin Netanyahu, then Israel’s prime minister, failed to meet his own deadline to announce a plan to annex portions of the West Bank during the summer of 2020, it wasn’t just his usual critics and advocates for the prompt creation of a Palestinian state who breathed a sigh of relief.

The missed deadline was also a relief to insiders at the Trump White House, who knew that annexation would derail their ambitious effort to make peace between Israel and the United Arab Emirates.

In fact, the very afternoon of the annexation deadline, a leading member of the Emirati negotiating team had for the first time told White House officials that if Netanyahu abandoned annexation, their country would fully normalize relations with Israel. But the officials did not know what Netanyahu would do.

That is one detail contained in “Breaking History,” Jared Kushner’s book about his stint as special advisor to President Donald Trump, his father-in-law, in which Kushner describes the secretive negotiations that would result in the Abraham Accords, the historic normalization agreements between Israel and multiple Arab and Muslim countries.

While much of what happened behind the scenes was established when the accords were announced or has been revealed in the two years since the first deal, Kushner’s book adds new details as well as a first-person account from a Trump administration official assumed by many to be advocating for Israel within the White House.

In the end, in part because of the normalization deals, Trump is seen by many as having been a steadfast ally to Israel and its hawkish prime minister. But according to Kushner’s account, portions of which the Jewish Telegraphic Agency obtained in advance of its Aug. 23 release, Trump came close to a major breach in relations over the annexation plan.

At one point, Kushner writes, two top officials — Ambassador to Israel David Friedman and Avi Berkowitz, a Kushner aide — “made clear” that Netanyahu was running the risk of Trump publicly opposing annexation.

“Additionally, with annexation, Bibi risked near-unanimous condemnation at the United Nations,” Kushner added. “And if he went forward unilaterally, there was no guarantee that our administration would block the international sanctions against Israel that might follow.”

In the end, Kushner writes, Netanyahu appears to have been convinced that annexation would be too costly for him and that normalization agreements would be a more substantive boon for his legacy. But he says the Israeli leader — known for being a cautious and stubborn negotiator, willing to move goalposts in negotiations — didn’t go along easily with the accords being negotiated by the White House without the direct involvement of Israeli officials. Even as the deal with the United Arab Emirates neared completion, Kushner writes, Netanyahu revised his cooperation to say that the United States would need to broker three agreements, not just one, for him to set aside annexation.

“I couldn’t believe it,” Kushner writes. 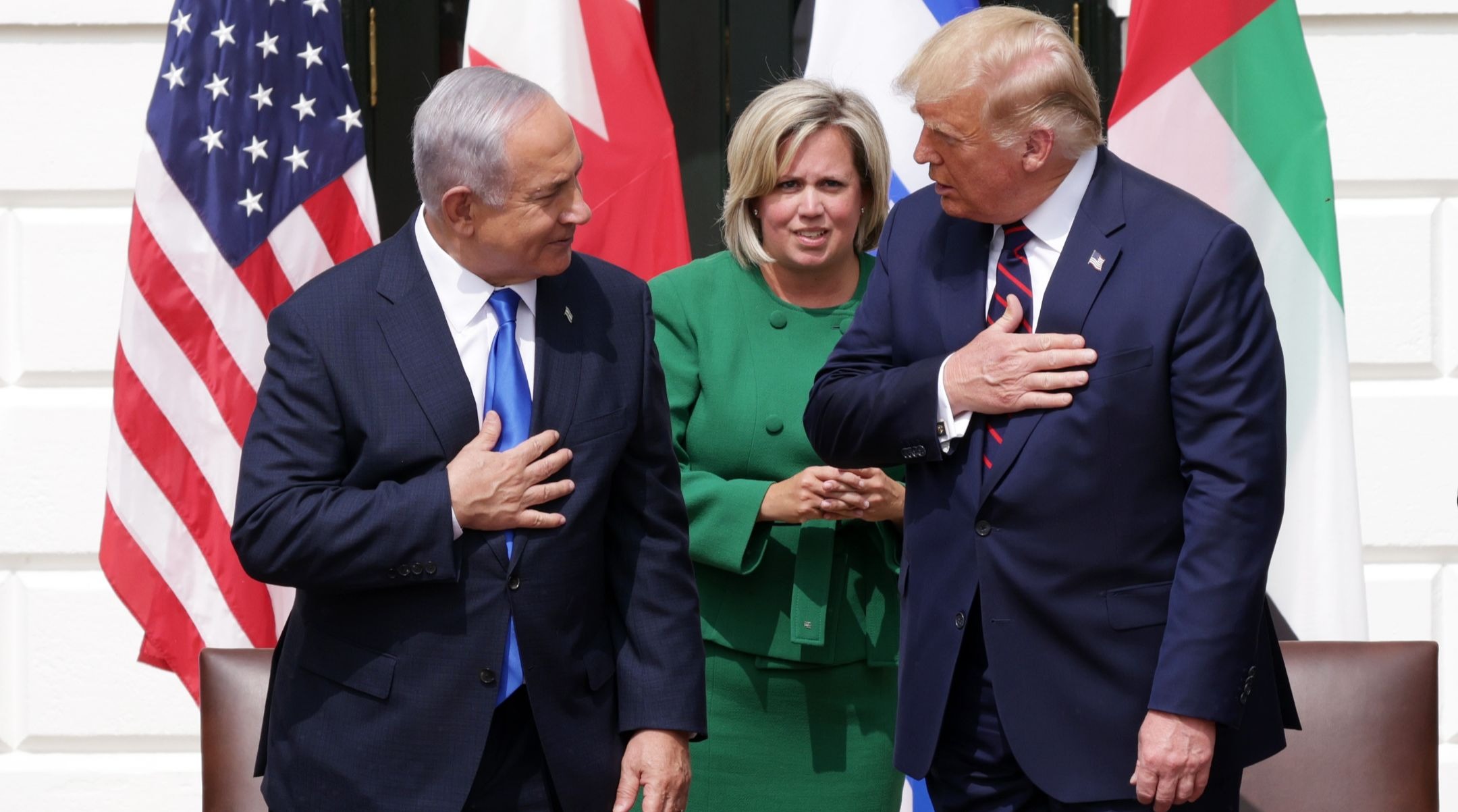 Prime Minister Benjamin Netanyahu, left, and President Donald Trump participate in the signing ceremony of the Abraham Accords on the South Lawn of the White House, Sept. 15, 2020. (Alex Wong/Getty Images)

The negotiations came during the spring and summer of 2020, when Netanyahu was struggling to cling to power and Kushner was trying to sell a detailed peace plan that he had authored earlier that year, as well as explore brokering ties between Israel and Arab countries that would break the logjam of Middle East relations.

What had appeared to be a triumphal moment at the peace plan’s January 2020 announcement had quickly turned into tension after Netanyahu tied the plan to annexation. “That was not what we had negotiated,” Kushner writes, according to an excerpt obtained by the Times of Israel in which Kushner says Friedman had unilaterally assured Netanyahu that Trump would back his annexation bid. (Friedman disputed that account to Times of Israel.)

Kushner suggests that he had been a consistent voice for Palestinians at the negotiating table, writing that since meeting with Palestinian Authority President Mahmoud Abbas in 2017, he had been pressing for to draw a map that would delineate two states that were separate and also beneficial to both sides.

“We were struggling to convince Bibi, a master negotiator, to agree to a compromise that would give tangible life improvements to the Palestinians,” he writes.

Ultimately, Kushner deprioritized the peace proposal in favor of the Abraham Accords, which he emphasizes inaugurated new business opportunities for Israelis and Emiratis as soon as the first was signed. Having negotiated the first deal entirely without direct talks between the two sides — an unprecedented arrangement — Kushner describes the heady atmosphere of Abu Dhabi during the celebratory convening as that of a “blind date.” Even on the first night of the trip, he writes, Israeli and Emirati officials began talking about ways to tie their financial systems together. The emphasis is notable given Kushner’s post-White House efforts to broker business deals leveraging the Abraham Accords.

Among the other notable details in “Breaking History”:

In Kushner’s telling, it was the United Arab Emirates that initiated peace with Israel. Ambassador Yousef Al Otaiba told Kushner at a May 2019 meeting at the Trump aide’s home that his country was ready to move forward with full normalization with Israel, according to Kushner’s account. “I tried to hide my excitement behind a poker face, but my mind was spinning,” Kushner writes. Later, Kushner says, Al Otaiba would make clear his country preferred to negotiate with the Trump team rather than directly with the Israelis.
The United States wasn’t the only country considering serious consequences if Netanyahu moved forward with annexation. The United Kingdom warned that it would recognize Palestine as a sovereign state if annexation took place, in a threat that was first reported in an Israeli journalist’s book earlier this year. Kushner writes that he responded to the threat by arguing for annexation in an effort to prevent British officials from learning about the normalization talks.
The name “Abraham Accords” wasn’t coined until just hours before the first deal was announced. “Until then, we had been so busy ironing out details that we hadn’t thought to name the agreement,” Kushner writes. As Jewish Insider reported in January, the name was the brainchild of U.S. Army Gen. Miguel Correa, who led the U.S. negotiations alongside Berkowitz.
Kushner explains the backstory of the Torah that he gave to the king of Bahrain, the second country to strike an accord with Israel. In 2019, he organized a conference there to advance the economic portions of his peace efforts; he recalls that the “Peace to Prosperity” workshop occasioned the first minyan, or prayer quorum, in a historic Bahraini synagogue in decades. “It was a profoundly moving experience for those who attended, but they noticed that the synagogue lacked a Torah scroll, which had to be written by hand,” Kushner writes. “Upon hearing this, I personally commissioned one to be made for the synagogue.” The Torah was installed at the synagogue in Manama, now newly renovated, in May 2021.
In an episode that had not previously been revealed, Kushner describes being treated for thyroid cancer in 2019. He says he chose not to share details about his health beyond a tight inner circle that initially did not include the president because of its personal nature, according to a report in the New York Times.