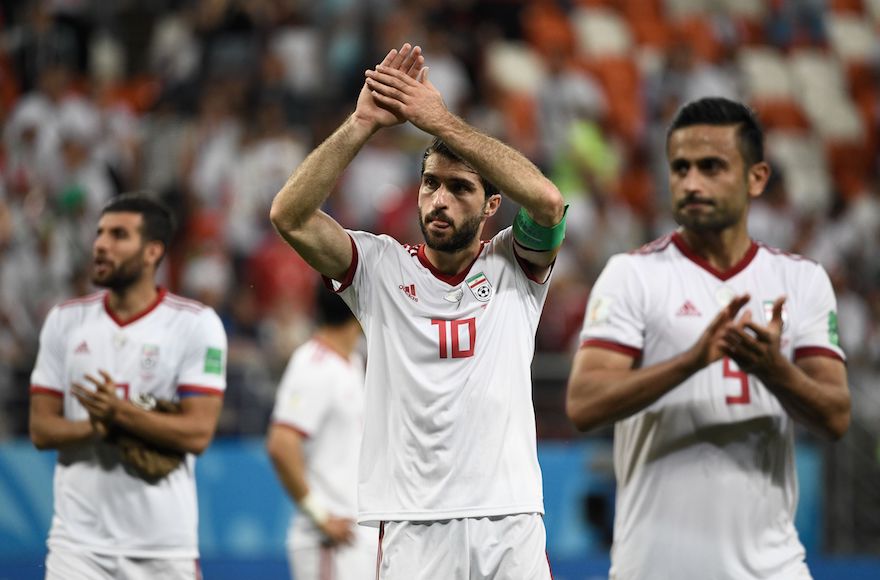 (JTA) — In a video addressed to the Iranian people, Israel Prime Minister Benjamin Netanyahu simultaneously lauded the country’s soccer team and its public protesters, while expressing Israel’s interest in a potential revolution by the Iranian people.

Netanyahu, who demonstrated impressive soccer juggling skills in the video, played soccer at his Philadelphia high school. The video was posted with Farsi and English subtitles on YouTube and Twitter.

“The Iranian team just did the impossible,” Netanyahu said, referring to Monday’s game between Iran and Portugal, in which the Iranians pulled off a 1-1 tie against the heavily favored European team. “You showed courage on the playing field and today you showed the same courage on the streets of Tehran.”

Iranian crowds have taken to the streets of Tehran to protest a plunge in the value of the country’s currency.

In the video, Netanyahu’s goooaaaal was to widen the rift between the Iranian people and their government.

“Can you imagine what your money could do if it was not spent promoting terrorism, in Syria and in Yemen, and instead would be spent to solve air pollution and water scarcity in Iran?” asked Netanyahu. “I will never stop advocating for peace with the Iranian people.”

Netanyahu appeared eager to capitalize on street protests that one expert compared to the movement that sparked the 1979 Iranian revolution.

“Two years before the Islamic Revolution, I lived in Iran,” David Menashri, founding director of the Alliance Center for Iranian Studies at Tel Aviv University, told The Jerusalem Post. “I saw what was bothering the Iranian people. The country was rich and the people were poor. And it’s repeating now.”

Said Netanyahu: “The solution to all these problems is the Iranian people.”