Netanyahu kvetches to Kerry on Iran and peace talks

Benjamin Netanyahu and John Kerry met today in Jerusalem, in the suite in the prime minister’s office named for Yitzhak Rabin. Tensions appeared to be lurking beneath the surface of the meeting. 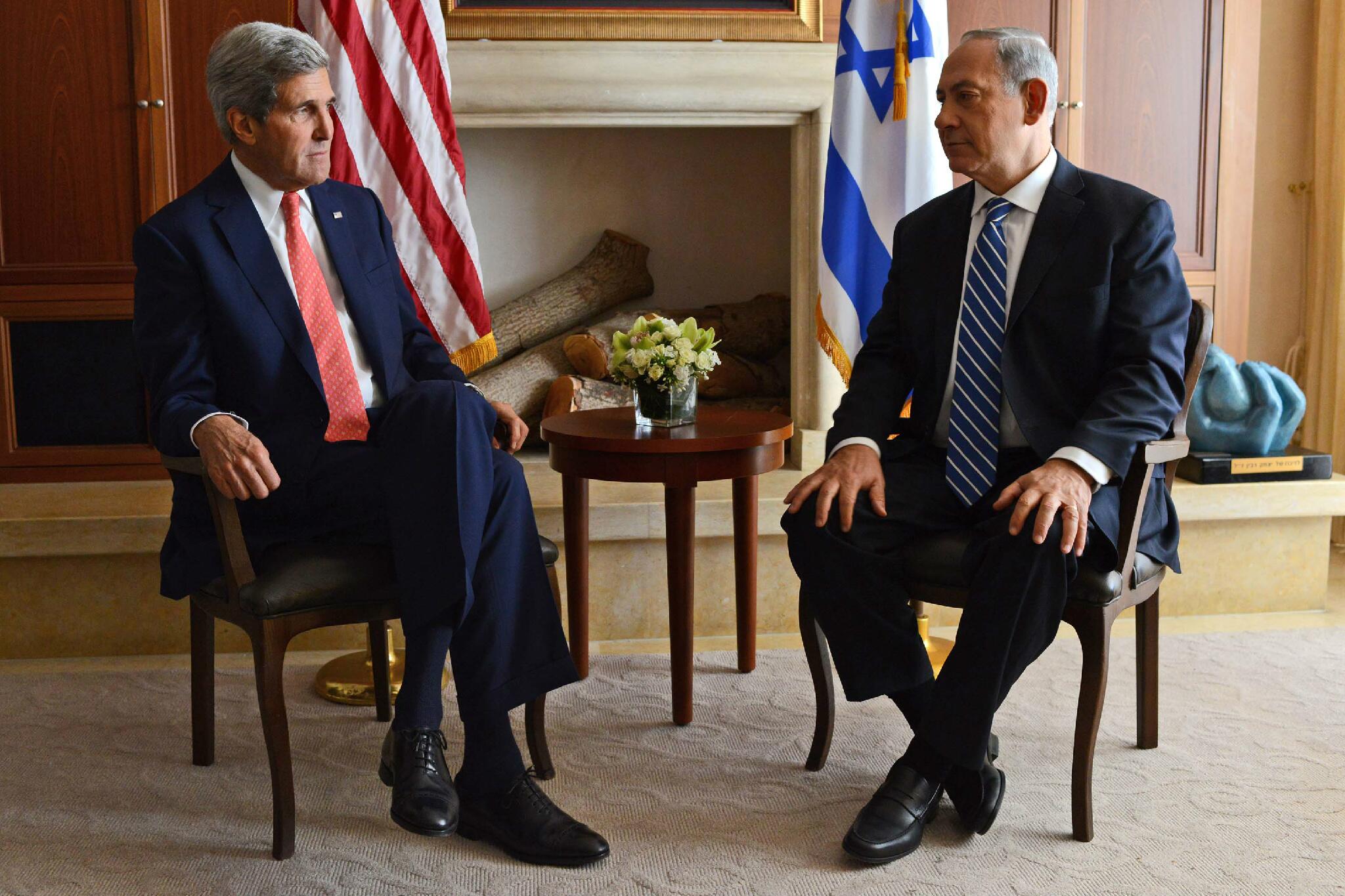 Then, there’s the actual transcript of their meeting.

The Israeli prime minister managed to make clear — without directly calling Kerry out — his concerns about American policies on Iran.

We just marked the event 34 years ago when the American Embassy was seized and we heard the chants, “Death to America.” We heard that two days ago again in Tehran, and this is, I believe, the true face of this regime or the person who controls this regime, the so-called Supreme Leader.

Translation: You’ve spoken with Hassan Rouhani and praised his moderation. But Ali Khameini is in charge, and nothing’s changed.

We’ve spoken about it many times, and I believe that as long as they continue their goal to enrich uranium to get nuclear weapons, the pressure should be maintained and even increased because they’re increasing enrichment.

Translation: You and your deputies have said plainly you want to maintain existing pressures on Iran, through sanctions and a U.S. military presence in the Gulf, but not increase it. I’m not playing along.

Netanyahu also had some complaints regarding the state of  Israeli-Palestinian peace talks. Amid charges that Israel’s settlement policies and negotiating stance are hampering talks, Netanyahu seemed eager to shift the blame for any lack of progress to the Palestinians:

I want peace with the Palestinians; Israel wants peace with the Palestinians. We agreed three months ago on certain terms. We stand by those terms. We abide scrupulously by the terms of the agreement and the understanding on which we launched the negotiations. I’m concerned about their progress because I see the Palestinians continuing with incitement, continuing to create artificial crises, continuing to avoid, run away from the historic decisions that are needed to make a genuine peace. I hope that your visit will help steer them back to a place where we could achieve the historical peace that we seek and that our people deserve.

Let me state unequivocally that President Abbas is 100 percent committed to these talks. He has committed that the Palestinians will not go to the United Nations during the period of time of these talks in exchange for the prisoners that are being released by Israel. That was the agreement. Let me emphasize at this point the position of the United States of America on the settlements is that we consider now and have always considered the settlements to be illegitimate. And I want to make it extremely clear that at no time did the Palestinians in any way agree, as a matter of going back to the talks, that they somehow condone or accept the settlements.

Ron Kampeas is JTA’s Washington bureau chief, responsible for coordinating coverage in the U.S. capital and analyzing political developments that affect the Jewish world. He comes to JTA from The Associated Press, where he worked for more than a decade in its bureaus in Jerusalem, New York, London and, most recently, Washington. He has reported from Northern Ireland, Afghanistan, Bosnia and West Africa. While living in Israel, he also worked for the Jerusalem Post and several Jewish organizations.