TEL AVIV (JTA) — For years Shlo Shalfy, a kindergarten teacher here, thought about the day she would send her 18-year-old son off to the army.

She would drive him to Bakum, the enormous military induction base in central Israel, and like all mothers of combat fighters, pray that it wouldn’t be their last car ride.

In late March, as Israel was under near total lockdown, Shalfy received a letter instructing her son Ely to report to a smaller, alternative military base. He would need to pack a month’s worth of clothes, face masks, hand sanitizer and other essentials, since weekend visits were now likely impossible. Shalfy and the other parents were to do the drop-off as quickly as possible — no selfies and no prolonged, tearful hugs, kisses or goodbyes — to prevent people from congregating and potentially spreading the coronavirus.

“I can’t tell you how much I cried,” Shalfy said. “I thought, ‘My child is going into the army and I can’t go through this with him.’ This has taken something that is important to our Israeli-ness.”

With just over 280 coronavirus-related deaths out of around 17,000 reported cases, the pandemic’s death toll in Israel has been relatively small compared to other hard-hit countries. Additionally, as of last week, some restaurants and bars were open for in-person business, along with shops and schools — but many still stayed home, cautious of catching the lingering virus.

The crisis has still upended families, gutted small businesses and wreaked profound emotional damage in Israel’s social and cultural capital of Tel Aviv — which is well known for places where people congregate, like beaches, in addition to its many bars and restaurants.

Here are some of the ways that Tel Aviv residents are adapting to the new normal. 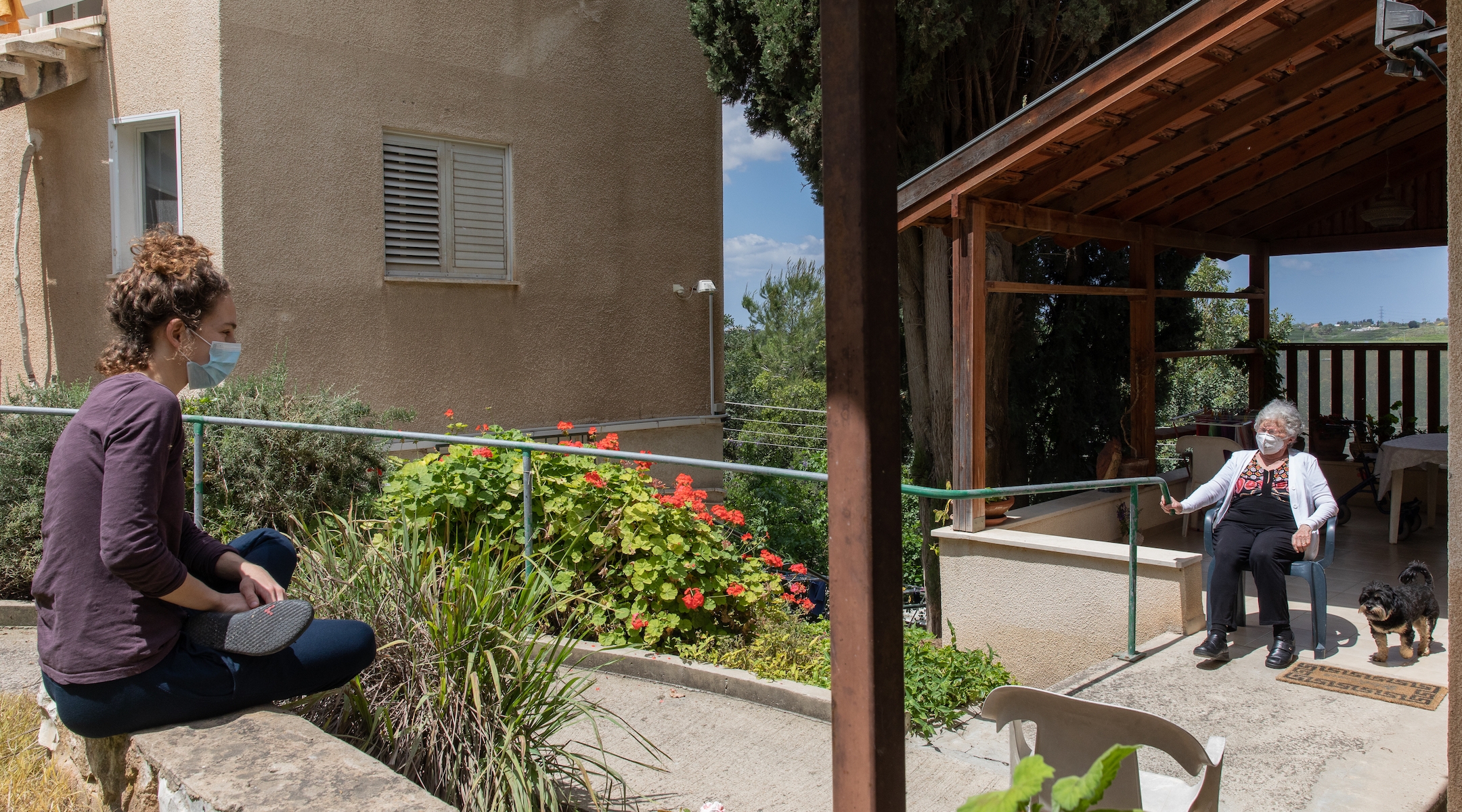 “The need for warmth, for closeness, generosity in Israel is huge,” Shalfy said. “This coronavirus, too, is a kind of military operation, and I think when it’s over, we’ll say, we went through this.”

With that in mind Shalfy, 55, has become part of a burgeoning, grassroots movement to forge connection here, even under the constrictions of social distancing.

These days, she does a regular grocery store run for a few elderly residents in her building, and several times a week, she organizes rooftop gatherings for her neighbors where they can unwind and discuss the challenges of home schooling, cooking for the family, or keeping in touch with relatives, all while two meters apart and wearing face masks.

She has also become the local middleman for asparagus farmers who drive their truck down from their moshav, or agricultural community, to sell to an eager market. They put in their orders ahead of time through an Excel spreadsheet that Shalfy posts in a neighborhood Facebook group.

She is just one of the unlikely organizers of what are being called neighborhood farmers’ markets, which have become a regular occurrence in Tel Aviv. They are facilitated by neighbors who are eager to do their part in supporting farms that are teetering on the brink of bankruptcy.

Throughout the week on any given street, farmers are trucking in their fresh fruits, vegetables, flowers and artisanal cheeses for curbside, minimal contact pickup. For the farmers, this new direct farm-to-consumer system helps regain some of the catastrophic losses that have hit the industry in the past three months.

“If it’s asparagus or going to the rooftop to meet up with neighbors, we’ve all realized that this sense of community, of belonging is something that’s really been missing,” Shalfy said. 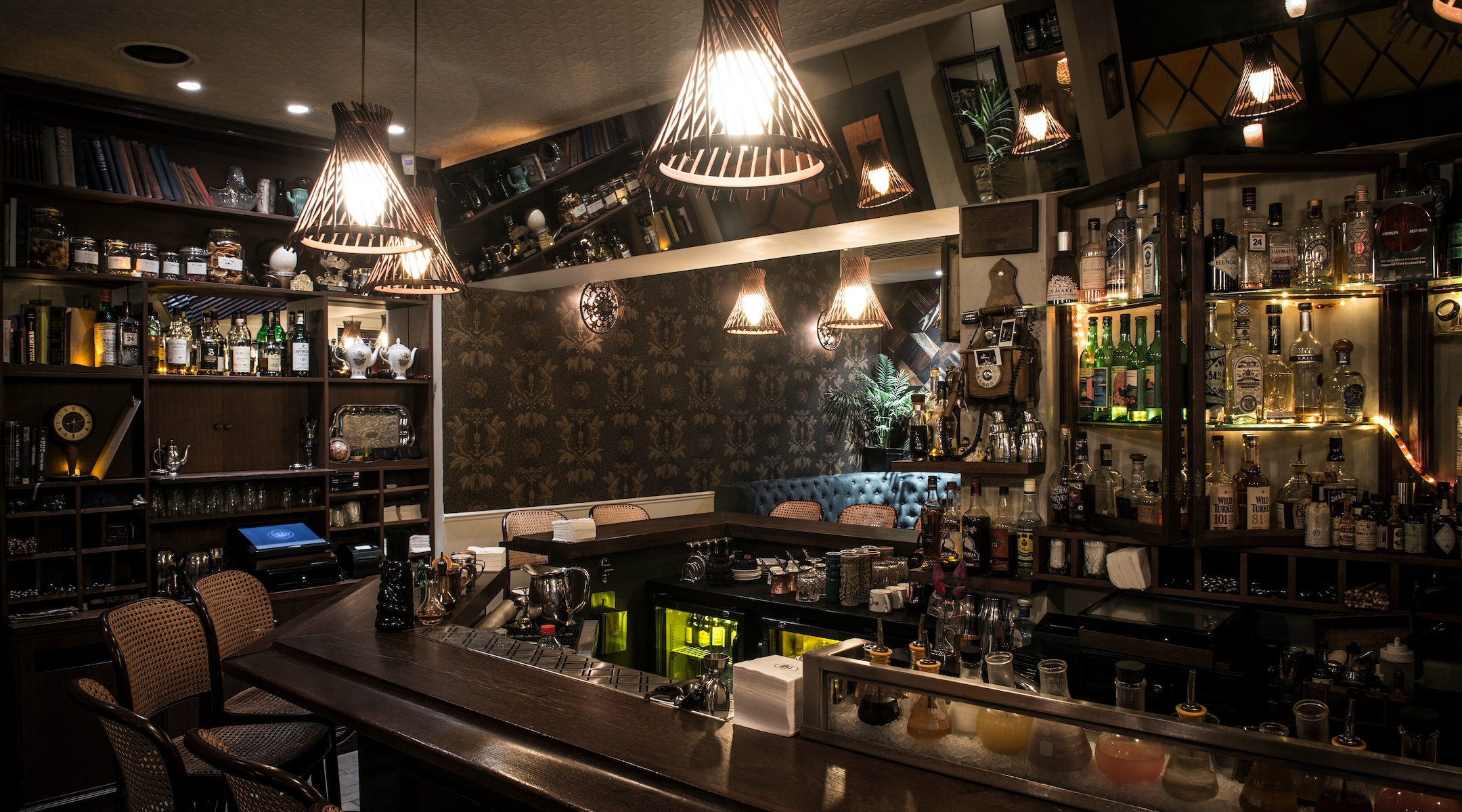 The Imperial Craft Cocktail Bar at the Imperial Hotel in Tel Aviv went without in-person patrons for months. (Ben Yuster)

In regular times, the upscale, colonial-themed Imperial Craft Cocktail Bar, tucked into the Imperial Hotel just steps from the beach boardwalk, can be impossible to get into. But since March — up until last week, when restaurants and bars were allowed to cautiously reopen — the coronavirus had virtually paralyzed Tel Aviv’s vibrant eating and drinking scene.

Bar Shira, a partner in the Imperial cocktail bar group that owns the Imperial and three other bars, said that with more Israelis drinking at home — though mostly beer and wine — to-go cocktails have become a niche market, as in other cities like New York.

He says that while the group has suffered immense financial losses, they hope to stay afloat as delivery orders rush in. The ready-to-drink cocktails come in 500 milliliter bottles and, Shira says, are often gifted by delivery to family and friends.

Unemployment in Israel has reached a record million people. With local disposable incomes and international tourism predicted to be on the decline for the foreseeable future, Shira and hundreds of thousands of workers in the restaurant and bar industry are hoping to somehow make it to the other end.

“Tel Aviv really loves to go out, but the question will be if they can,” Shira said. “We’ve seen economic problems in the past and we’ve gotten through them. It’s a guess, but I hope we can get through this one, too.”

A breath of fresh air for the elderly 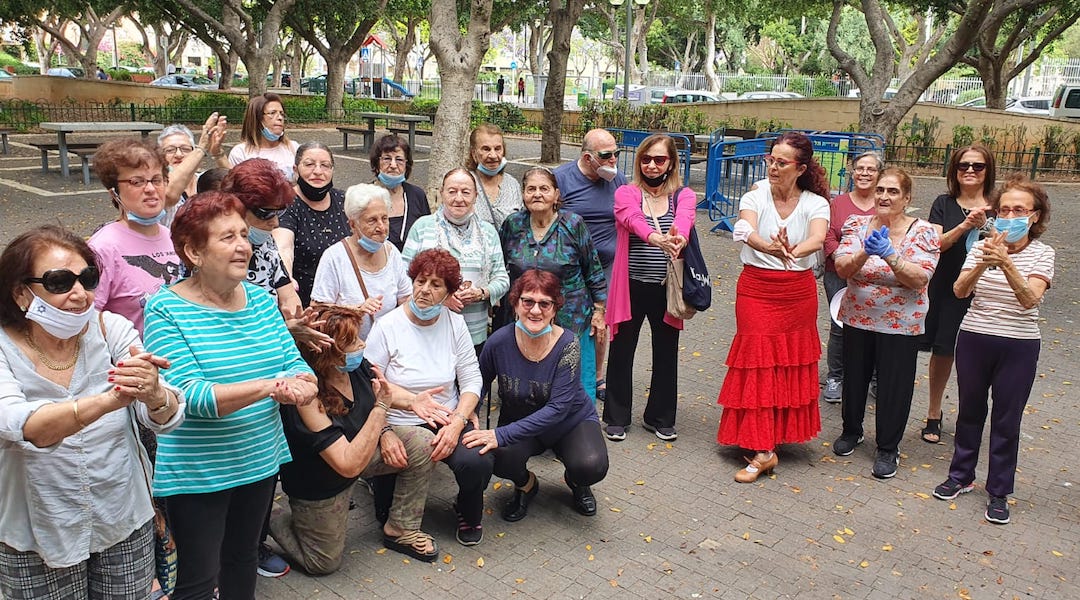 Participants in the Golden Gardens program clap for a speaker. (Yalya Galam/Iris Cohen)

While a good amount of the government’s promised $23 billion in aid has remained tied up in red tape, it’s been local, community-based projects that have delivered information and social distancing-friendly programming.

Among the beneficiaries are Tel Aviv’s thousands of elderly residents — defined as over 65 —  who have needed to watch from the sidelines as restrictions on movement have lifted, schools and markets have opened, and society has begun to return to normal. The group is considered “at risk” and has been directed by the Health Ministry to remain at home.

Elad Sela, a City Hall community leader for southern and eastern districts of Tel Aviv, realized that it was critical to provide something uplifting for them. So he launched the Ginot Hazahav, or Golden Gardens program, which cordons off sections of dozens of parks throughout the city for several hours in the morning, for the exclusive use of the elderly.

Dozens of people arrive every day, equipped with face masks, and participate in instructor-led activities like sing-alongs and stretching class, or even just sit on plastic chairs, chatting about issues that have been on their minds.

“It doesn’t need to be complicated. Actually, it’s better to keep it simple,” Sela said. “The effect of even just a little music and dancing is amazing.”

Artists go online and look for other work 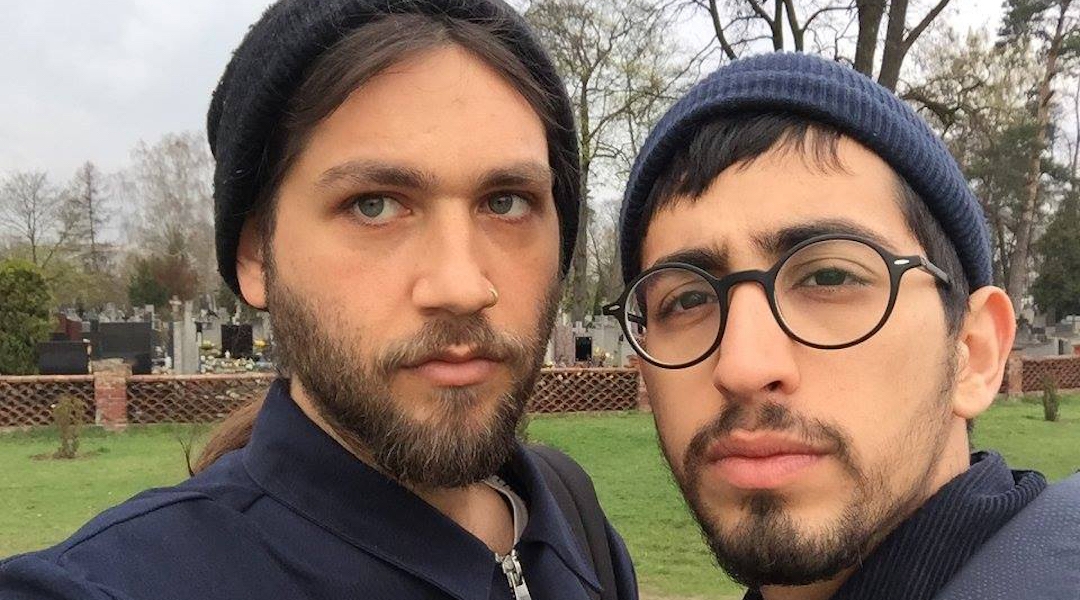 The world-famous theaters, art galleries and dance spaces that employ tens of thousands of Tel Aviv residents have been the last in line to receive financial aid from the government, and, by all accounts, will also be the last to return to work. Many, with heavy hearts, have abandoned the sector completely, while others have looked for alternative in essential work like deliveries.

In April, faced with mounting bills and a nationwide ban on all cultural and leisure activities, actor and playwright Daniel Botzer launched Habima Deliveries, named after the national theater located in Tel Aviv. It’s manned by dozens of out-of-work actors desperate for work.

“Maybe this really is the difference between self-actualization and making a living,” Botzer told Channel 11 News in April, as he drove his delivery route from Herzliya to Rosh Hayain.

Culture and Sports Minister Miri Regev announced that theaters and cinemas would reopen on June 14, with the caveat that every two seats be left empty.

“When we were cooped up in our homes, we all went to the poems, the books, we watched a movie, a TV show. We don’t just consume culture, we need culture,” Israeli actor Tuvia Tsafir said at a recent protest.

Tamir Erlich, an Israeli artist who at the end of March left behind his life and his studies at the Royal College of Art in London, said that with all the difficulty brought by the crisis, it’s also been a creative boon to the fringe art world. When he came back to Israel, like all travelers coming into the country from abroad, he needed to go into a two-week quarantine. He was joined by his partner and fellow artist Noy Haimovitch and, partly out of boredom, partly out of curiosity, they launched Bidud, or “quarantine” in Hebrew, an online artist residency that hosts a different artist every day and has attracted hundreds of visitors on a daily basis.

Erlich, a multidisciplinary artist, hopes that this could be an opportunity to accelerate an already existing movement to increase access to art as the online shift is forced into happening.

“In a more global way, I think this will be very important for education, to create an equalization of access, to also open up the art world beyond Tel Aviv,” he said. 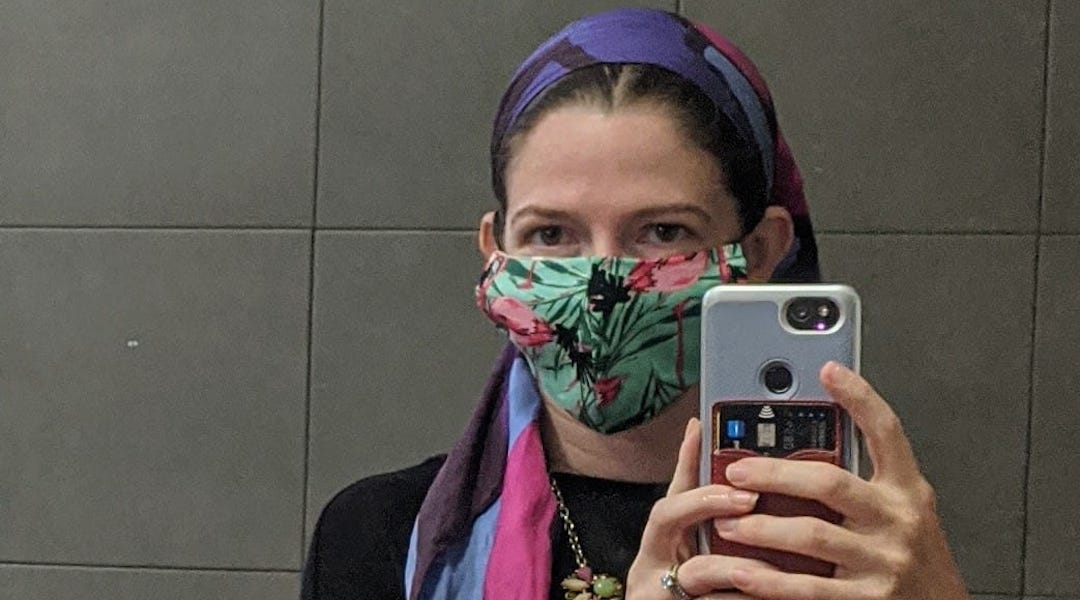 Atara Lindenbaum, who immigrated with her family last August, was excited for her position as a teacher at the modern-Orthodox Tel Aviv International Synagogue.

In late March, though, just as the nationwide lockdown was being rolled out, and as a third of cases were reportedly traced back to synagogues, including one at the International Synagogue, she realized she was in for a different kind of journey than she imagined.

Instead of connecting with her community in person, the community has had to move online. The synagogue’s rabbi gives 10-minute Torah talks on Facebook Live several times a week, interacting with congregants in Hebrew, English and French. Shabbat services have started streaming on Zoom, then turned off once Shabbat starts. Congregants, including dozens of new converts as well as many others unfamiliar with the prayers, have been left to carry on by themselves.

Lindenbaum’s 70 students or so sign into her Zoom conversion class four times a week. Instead of the small room in the synagogue with no blackboard, she can present organized slides and links to articles and websites that they can then discuss in real time. So she’s trying to find a silver lining.

Sara Naiditch, the co-director of Chabad on the Coast in central Tel Aviv, which caters mainly to international young professionals, says she’s been inspired by her community’s dedication to staying together. Though she’s gone from Shabbat meals of 300 people down to only her nuclear family, she says the time of difficulty has made her and her husband reached out personally to new people in their community.

“I think it’s kind of back to the basics of building individual connections,” she said. “I think when we do come back, together – and we will – we’ll all be much stronger for it.”