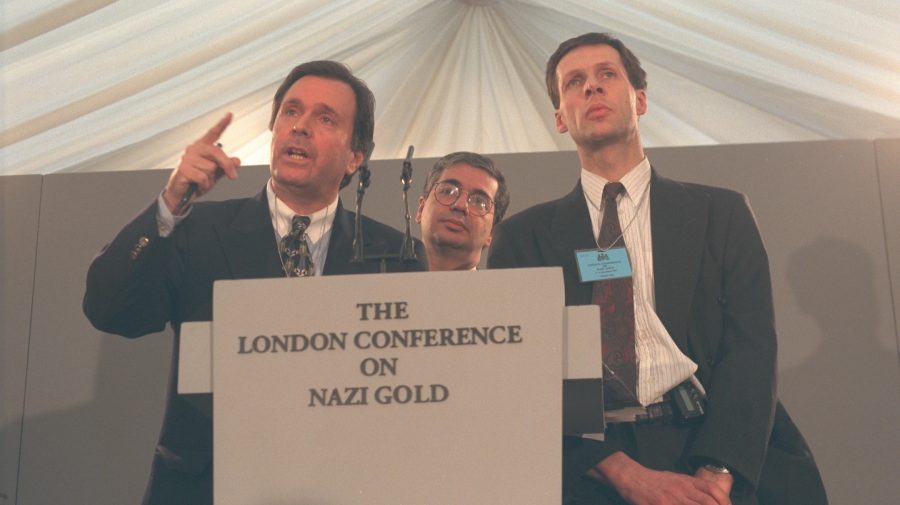 (JTA) — Neal Sher, who as the U.S.’s chief Nazi hunter established the formula that led to the deportation of dozens of Nazis, has died at 74.

Sher, who led the Justice Department’s Office of Special Investigations for 11 years and was for a period the director of the American Israel Public Affairs Committee, died Sunday in Manhattan, his widow, Bonnie Kagan, said in an email to friends.

Darkly handsome, dapper and intense, Sher cut a dashing figure throughout the 1980s. At press conferences he would unveil the discovery of monsters disguised as working men living contented lives in American suburbia.

But behind the drama, there was hard work, in a formula crafted by Sher during his years at the OSI, first as a litigator when he joined in 1979, the year it was established, and then as its director from 1983-1994.

He transformed the Justice Department’s Nazi-hunting system from one that had relied on tips, which were not always reliable, to one which systematically checked Nazi-era German records against U.S. immigration records. Under his system, the office has, since 1979, removed 69 former Nazis, in most cases revoking their citizenship for lying about their Nazi past when immigrating to the United States. A number of them killed themselves as the feds were closing in, some spectacularly.

In one explosive episode, Sher, citing evidence that former U.N. Secretary-General Kurt Waldheim had not disclosed his past as a Nazi officer, got the U.S. government to ban his entry to the United States.

Sher’s doggedness led to the discovery not just of Nazi cogs, but of major figures, among them Archbishop Valerian Trifa, who had instigated a pogrom against Bucharest’s Jews, and Arthur Rudolph, the NASA scientist deported to Germany after Sher showed that he had directed a German wartime factory where he worked Jews to death.

“For these people to live freely in the United States is contrary to everything this country stands for,” he told “60 Minutes” in 1983.

There were occasional flubs: The OSI’s efforts led to the extradition in 1986 of Nazi camp guard John Demjanjuk to Israel; the OSI identified Demjanjuk as Ivan the Terrible, the mass murderer at Sobibor, and it was for those crimes Demjanjuk was sentenced to death in an Israeli court. An Israeli appeals court in 1993 established that Demjanjuk was not Ivan, and returned him to the United States, where a U.S. court chastised the OSI for withholding exculpatory information.

The OSI continued to pursue the case, noting the overwhelming evidence that Demjanjuk was a lower level camp guard implicated in the murder of thousands, and he was deported to Germany in 2009, where he was tried and convicted, and where he died in 2012.

Sher’s relentlessness infuriated the leaders of Ukrainian, Polish and Romanian communities in the United States who said that the old men should be left alone decades after the crime, sometimes claiming that some of the evidence against the former Nazis was tainted because it was gathered in the former Soviet Union. Sher rejected those objections.

“There’s no statute of limitations for mass murder,” Sher said on “60 Minutes.”

Sher became AIPAC’s executive director in 1994 but lasted in the job for only two years. Both sides said it was not a good fit; an AIPAC insider at the time told the Jewish Telegraphic Agency that Sher was not able to bring the passion he showed for hunting down Nazis to defending Israel.

Sher was silent at the time, but in a 2007 op-ed for JTA, he described underlings as maneuvering around him to position AIPAC as confrontational with the Clinton administration, pushing though a Jerusalem-related bill that both the U.S. and Israeli governments opposed.

“We mourn the passing of Neal Sher, who led a life dedicated to the pursuit of justice and the defense of the Jewish people,” AIPAC said Thursday in a statement.

In 1998, Sher became the first chief of staff for the International Commission on Holocaust Era Insurance Claims, the body established to extract claims that insurance companies had resisted disbursing to the survivors of clients murdered in the Holocaust. He was forced to resign in 2002 after the Baltimore Sun exposed him for filing more than $100,000 in false expenses. He repaid the fees, was disbarred in Washington D.C. and was suspended by the New York Bar.

He had at least one more win up his sleeve: His New York Bar status restored, he went to bat as legal representation for the families of victims of a 2009 terrorist shooting at Forth Hood in Texas. The army characterized the killings, carried out by a psychiatrist who became an Islamist, as “workplace killings.” Sher’s relentless advocacy led Congress to pass legislation in 2015 that allowed the Purple Heart to be awarded to the 13 people killed and the more than 30 wounded in the attack.