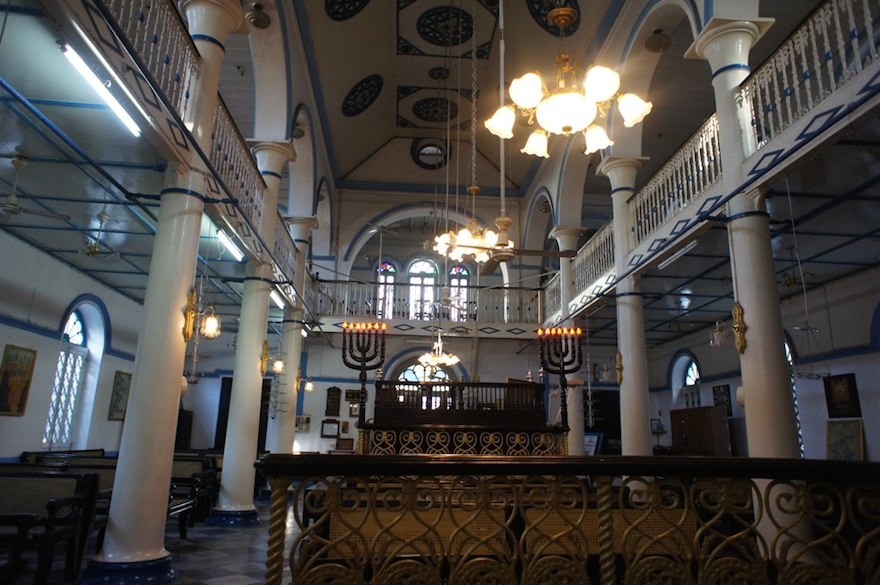 The interior of the Musmeah Yeshua Synagogue in Rangon. (Wikimedia Commons)

(JTA) — Myanmar’s only synagogue was recognized by a Yangon historical organization.

The Musmeah Yeshua Synagogue in Yangon, formerly Rangoon, installed a blue heritage plaque Sunday given by the Yangon Heritage Trust. Only 11 other buildings in the city have received this recognition so far, the Myanmar Times reported.

“The synagogue was part of a once-flourishing Jewish community in Yangon and a reminder that Yangon has always been, since its founding in the 1750s, home to people with connections across the world,” U Thant Myint-U, the trust’s founder, told the Times. “We have dozens of religious sites, belonging to all major religions, in downtown Yangon, and this is something to be proud of and celebrated.”

Built in the 1890s, when the southeast Asian country was a British colony and called Burma, the synagogue is located in a busy commercial section of downtown Yangon.

“I am very proud and very excited for this blue plaque. It does not just show the architectural significance but also recognizes the dedication of families and individuals to preserve these buildings,” said Sammy Samuels, whose family has for generations maintained the synagogue.

In an article published May 11 in the Phoenix Jewish News, Samuels said the family’s commitment to maintaining the synagogue began with his great-grandfather.

“He had a strong attachment to the synagogue. He also was the head of the community at that time, so if he had left, the synagogue would have been closed,” Samuels told the Phoenix paper. “Before he passed away, he made my father promise to keep the synagogue alive. I made a similar promise to my father, as well.”

According to the article, the country’s Jewish population peaked in the early 20th century with 2,500 people. The two-story synagogue in the city’s downtown is funded by proceeds from Samuels’ travel agency, Myanmar Shalom Travels, which leads tours of Myanmar, and by donations from visitors.

Approximately 40-50 tourists, most of them non-Jewish, visit the synagogue daily, according to Samuels.

From the Archive: Jew elected to first mayoralty post in Burma (July 4, 1932)