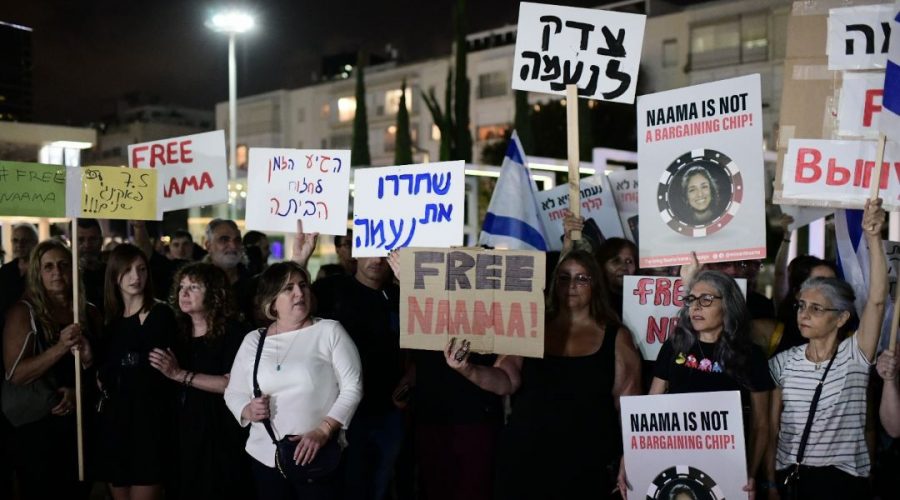 Family, friends and supporters call for the release of Naama Issachar, an Israeli-American woman imprisoned in Russia for drug offenses, at Habima Square in Tel Aviv on October 19, 2019. Photo: Tomer Neuberg/Flash90

JERUSALEM (JTA) — The mother of an Israeli-American woman being held in a Russian prison has asked Russian President Vladimir Putin to pardon her daughter.

Yaffa Issachar, the mother of Naama, sent the letter through the Greek Orthodox Patriarch of Jerusalem Theophilos III, the Hebrew daily Maariv reported.

The Patriarch met last week with Putin in Moscow, where he was visiting by invitiation of the  Russian Church. He met with Yaffa Issachar in Jerusalem before leaving for Russia and delivered her direct message to Putin.

“Dear Vladimir Vladimirovich! I, Yaffa Issachar, the mother of Na’ama Issachar, who has been in prison for seven months, plead with the heartache of a mother to pardon my daughter and return her to her family,” the message read, according to Maariv.

Issachar was sentenced in Russia last month to 7 1/2 years in prison for drug smuggling. She had been detained in Russia since April after 9 grams of marijuana were found in her luggage before a connecting flight on the way from India to Israel, where she moved while in high school. She had not planned to enter Russia.

Nine grams is less than a third of an ounce and is within the legal limit for personal use in Israel. It generally gets a slap on the wrist in Russia.

Earlier this month, Israel extradited Russian hacker Aleksey Burkov to the United States, where he is wanted on embezzlement charges for a credit card scheme that allegedly stole millions of dollars from American consumers

Russia had tried exchanging Naama Issachar for Burkov, but its advances were turned down by Israel.