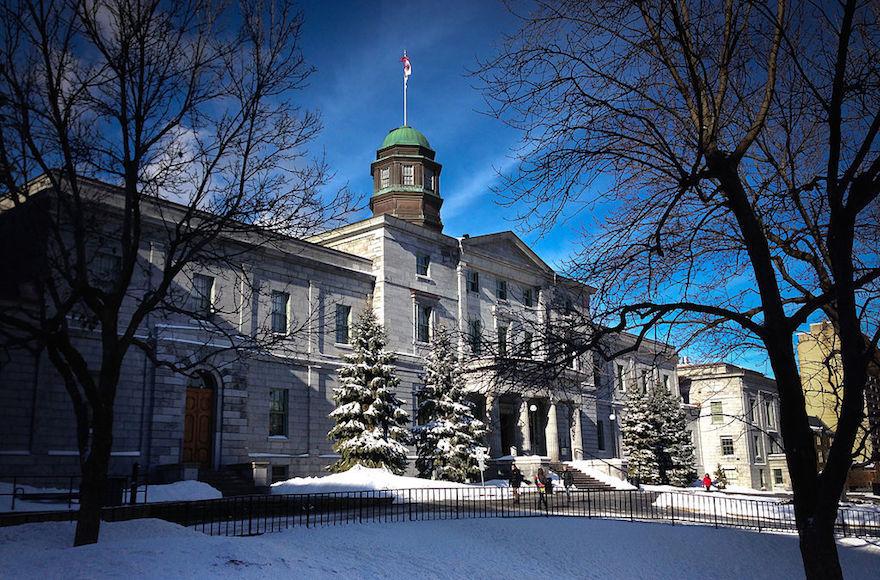 The student government at McGill University, seen here, is being accused of a "persistent abuse of power and displays of hostility toward Jewish and pro-Israel students." (Wikimedia Commons)

MONTREAL (JTA)—McGill University’s student union did not ratify a call for a Jewish student to resign for accepting a free trip to Israel and the Palestinian Authority.

The student union’s board of directors — its chief governing body — rejected a motion on Monday that was passed days earlier by its legislative council that said member Jordyn Wright must resign or face impeachment.

Wright condemned the motion as discriminatory and anti-Semitic. It was also strongly criticized by the McGill administration, the Anti-Defamation League, the Centre for Israel and Jewish Affairs and hundreds of McGill students.

Wright was the only McGill student, and the sole Jewish participant, singled out in the motion. At least one other non-Jewish student from McGill and its student union, the Students’ Society McGill University, is attending the trip.

“CIJA (The Centre for Israel and Jewish Affairs) applauds the SSMU’s board of directors for unequivocally rejecting the legislative council’s discriminatory motion targeting a Jewish student leader,” the centre’s Quebec co-chair, Rabbi Reuben Poupko, said in a statement.

Wright was invited on the trip, called Face to Face, by Hillel Montreal.

She was identified by Hillel as “an invaluable student to have on this trip due to your student leadership experience and connections on campus.”

The trip is scheduled to leave at the end of the month and visit Israel and the West Bank.