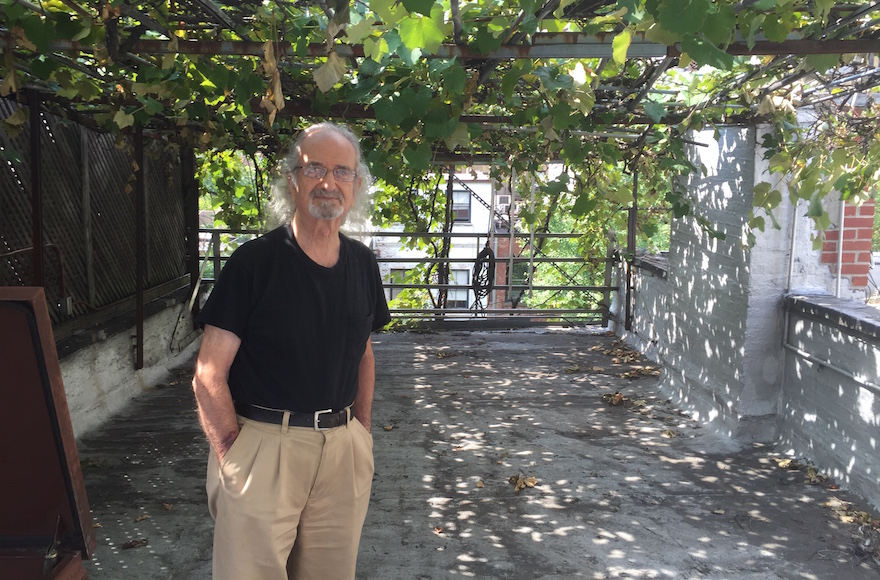 Latif Jiji at his Upper East Side winery, which dates back 40 years. (David Klein)

NEW YORK (JTA) — Latif Jiji looks over this year’s crop at Chateau Latif with an expression of satisfaction.

If you’ve never heard of Chateau Latif, you’re not alone. In fact, your favorite sommelier probably hasn’t heard of it, either. It’s not from the south of France, nor is it from Napa Valley. Rather, it’s terroir is the Upper East Side of Manhattan.

As far as he knows, Jiji is the only winemaker in Manhattan who grows his own grapes on the island. The “chateau” is the brownstone that Jiji, 89, has shared with his wife, Vera, for the past 50 years, and the winery’s grounds are their 15-by-45-foot backyard. The grapes come from a single vine, measuring more than 100 feet, that grows out of the garden, up the exterior wall and onto the roof.

Though the vine draws its water from the East River, its roots stretch back to a different waterway: the Shatt Al-Arab, the confluence of the Tigris and Euphrates rivers, on which the Iraqi port city of Basra sits. It was there, in 1927, that Jiji was born into a Jewish family. He caught the winemaking bug from his father, who grew grapes and made wine in the courtyard of their home on Basra’s main thoroughfare.

Jiji said his passion for wine “came from being Jewish in Iraq, celebrating Passover.” The making and drinking of alcohol, he explained, was something that separated Iraq’s Jewish and Christian minorities from the country’s Muslim majority, for whom alcohol is forbidden.

During his childhood, Basra was a sleepy town with about 10 synagogues and two Jewish schools, Jiji told JTA. Life in Basra was peaceful, he said, and the Jewish, Muslim and Christian residents of the city coexisted nicely.

But in 1941, after Iraq’s short-lived alliance with Nazi Germany prompted a British invasion, rioting and looting that targeted Jewish neighborhoods and businesses broke out in the city. The pogrom became known as the Farhud — an Arabic term meaning “violent dispossession” — and while it was limited to looting in Basra, in Baghdad nearly 200 Jews were murdered and hundreds more wounded.

The Jijis were spared most of the violence, and they opened their home to friends and relatives fleeing more dangerous parts of the city.

“Jewish people, of course, were frightened,” Jiji said. “Friends and relatives started to come to our house; we had probably about 50 people. We gave up our beds, my siblings and I. I remember sleeping on the floor with only a towel for a pillow for days.

“A lot of people in the house started talking about what to do if we were attacked. We had no arms, but we had long sticks and at the end of the long sticks we put a bolt. We carried them around in case someone tried to break down the door, but no one did. “

Eventually the violence subsided and things returned to more or less normal within the Iraqi Jewish community. But in the years to come, the Farhud would be remembered as the beginning of a downward slide that led to the conclusion of 2,700 years of Jewish life in Iraq.

Jiji recalled listening on the radio to the 1948 United Nations vote to partition Palestine. Though his family cheered at the founding of the State of Israel, he knew his life In Iraq was over.

By the fall he was enrolled in college in the United States. Within the next decade, the rest of his family had fled to either the U.S. or Israel.

Jiji’s life in the U.S. began in an unlikely place, at Hope College, a devoutly Christian school in the town of Holland, Michigan. He then transferred to the prestigious Massachusetts Institute of Technology to earn a degree in engineering.

But during his junior year, he received an ultimatum from the Iraqi government: Return or have your Iraqi citizenship revoked. Having resigned his future in Iraq years before, the choice was obvious. But Jiji, rendered stateless, was left in limbo, possessing a student visa but lacking any other status.

Academia was one of the few avenues that remained open to him, so Jiji continued his studies, eventually earning his doctorate at the University of Michigan. Though he received U.S. citizenship in 1961, Jiji remained an academic, teaching engineering at various universities, including the City College of New York, where he worked until his retirement in 2014.

Jiji met Vera — the child of Jewish immigrants from Hungary, who grew up in the Bronx speaking Magyar at home — in 1954 at an event in New York for the radio station WBAI.

And while Jiji’s vine was initially an homage to his father and Basra, it is also, like the four children they raised together, the product of the couple’s  marriage of more than 50 years.

Vera had planned an elaborate garden for the backyard in 1977. Among various annuals and perennials, she planted a cherry tree and an evergreen.

“I showed it to my husband with great pride — then he took a tiny stick, planted it in the ground and it took over the whole thing,” she said of the vine. 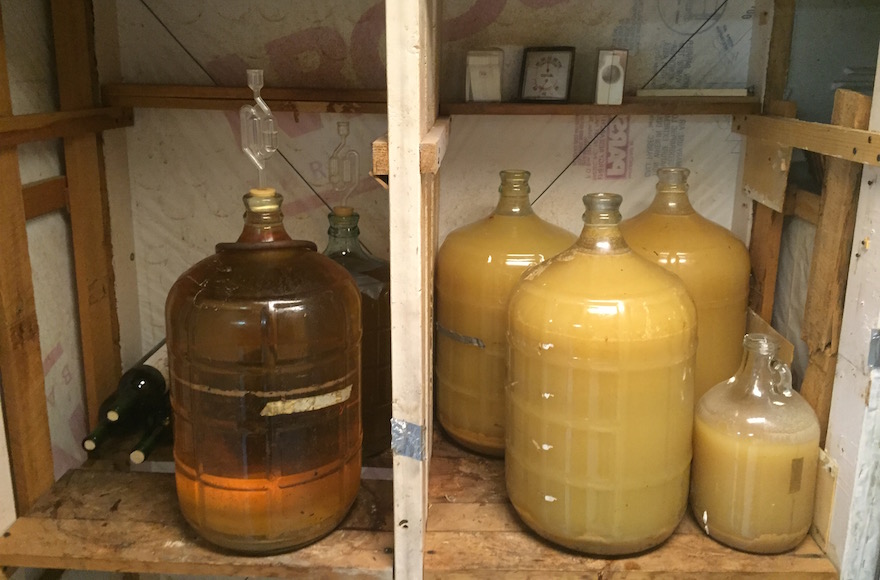 The wine Jiji makes comes from grapes off a single vine that measures more than 100 feet. (David Klein)

Jiji’s initial plan wasn’t to make wine — he just thought the vine would add a bit of distinction to the backyard. Seven years later, however, it produced enough grapes that he thought he may as well give it a try. Jiji knew a bit about winemaking, having watched his father’s primitive process, and he studied up on it, too, buying all sorts of books and pamphlets, as well as equipment.

That first harvest, in 1984, yielded 24 pounds of grapes, enough for nine bottles of wine. To date, the record is 712 pounds in a single harvest.

Vera is proud of Chateau Latif — after all, she came up with the name, a play on the Rothschild winery Chateau Lafite, whose vintages are among the most expensive in the world. (Chateau Latif’s wine, by contrast, has no price point — Jiji doesn’t have a license to sell it, so he shares it with friends and family.)

Aside from its location, the vine itself is something of a rarity — most wineries have a lot of space and therefore grow their grapes on numerous short vines.

“It’s contrary to all traditions — from the Greeks, the Arabs, the Italians, the North Africans,” Jiji said of his vertical vine.

The wine is a dry white, made from Niagara grapes that are native to New York. Though often found in supermarkets, the grapes are uncommon in wineries. And while the taste fluctuates from year to year, the one constant descriptor is “fruity,” Jiji said.

As each summer nears its end, Jiji begins to measure the sugar content of the grapes on the vine. Once he has collected enough data, he determines the prime 10-day period to harvest the grapes, usually in mid-September. After the harvest, the grapes go to the basement, which houses the wine cellar, the machinery that Jiji uses to process the grapes into juice, as well as a one-of-a-kind refrigerator that he built himself. The juice ferments there, eventually becoming wine.

It takes up to two weeks for the sugar in the juice to turn into alcohol, and another nine to 12 months for the sediment to settle and the liquid to clear and begin to look like wine. During this fermentation period, the gases created during this process escape through a special valve that lets air out but not in.

And now, as the days shorten and the nights grow cooler, Jiji’s house will again come alive with activity.

Friends and family will gather to pick the grapes from Jiji’s vine and crush it into juice to begin the fermentation process. After a day’s labor, they will gather for a home-cooked meal and enjoy some of last years’ vintage of Chateau Latif.

“It’s a very unusual activity, the harvest, but people always enjoy it,” Jiji said. “This is our 33rd year, and there are people who have been with us for 30 years.”