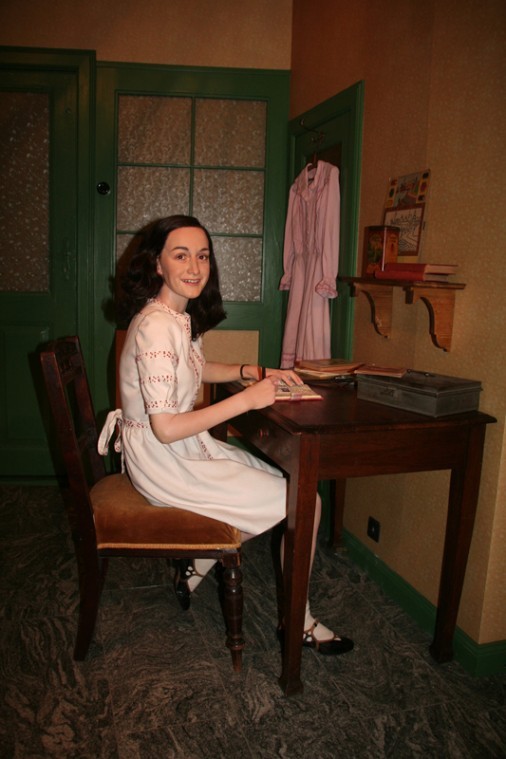 A wax likeness of Anne Frank has been installed at Madame Tussauds in Berlin -- in the room next to the Hitler figure.

LOS ANGELES — Is the image of Anne Frank heading in the same commercial direction as Edvard Munch’s “The Scream”?

Munch’s Expressionist painting, once an iconic representation of horror, for years has been available as a party inflatable, an action figure mask, even a bobblehead. With the installation of a lifelike wax figure of the famed Holocaust diarist on display in Madame Tussauds in Berlin, could Frank’s image be susceptible to the same misappropriation and exploitation?

Considering that a 1999 issue of Time magazine listed Anne Frank as one of the most important people of the 20th century, and that the “Diary of Anne Frank” is one of the best-selling books of all time, it probably should not be surprising us that publishers and manufacturers are cranking out Anne Frank posters, postcards, limited edition T-shirts and key chains in an effort to cash in on her celebrity.

The fact that Madame Tussauds has locations worldwide indicates tourist acceptance of the museums, which are filled with kitschy wax likenesses of celebrated personalities such as John Kennedy, Albert Einstein, Marilyn Monroe and Rihanna — all done up in unblinking cosmetic perfection. But are we ready for a young Jewish martyr and personification of the Holocaust to be melted into the waxy mix?

It’s not entirely clear. The German publication Der Spiegel noted that the wax figure of Adolf Hitler, which the museum reintroduced after it was beheaded by a visitor in 2008, is in the next room. Chris Hale, a producer who lives in Berlin, wrote on his blog that Frank’s likeness is displayed in “the city where the diabolical plan to murder all the Jews of Europe was hatched.”

But with several metal sculptures of Frank already on display in the U.S. and Europe — there’s even one near the Anne Frank House in Amsterdam — why all the fuss? Isn’t a wax figure just a sculpture done in a different medium?

Madame Tussauds did not respond to JTA’s request for comment. But museum spokeswoman Nina Zerbe told Der Spiegel that the museum wanted to convey a “sense of optimism” with the figure and that “It’s important to let the story continue.”

Perhaps it is the motionless three-dimensional quality of the wax likeness. Frank is shown seated at her writing desk in the attic room made famous in her diary, complete with frozen smile that adds a dimension of jittery concern. The projects that put her and her world into motion — a Tony Award-winning Broadway play, a movie, a Japanese animation, a PBS movie of her life and a CD with a virtual tour of the house where she hid — all escape this effect.

An Anne Frank comic book even seems to capture her spirit better.

In 2010, The Anne Frank House in Amsterdam approached two American comic book artists, writer Sid Jacobson and illustrator Ernie Colon, to create “Anne Frank, The Anne Frank House Authorized Graphic Biography.” Published that year by Hill and Wang, the book was among the first major projects in print to move beyond the boundaries of presenting Frank simply in word and in photos.

“Can Anne Frank’s Story Be Told in a Comic Book?” Time magazine asked when the book first came out, foreshadowing some of the concern that the boundary-breaking Frank wax figure has received.

“With a graphic format we could make a more truthful presentation of the story,” Jacobson said in a recent interview from his home in Los Angeles. From traveling to Amsterdam and seeing the house and the research, he knew he wanted to put the Frank story in context by also telling the story of the rise of Nazism.

“Seeing a person that you know introduced in a few quick panels is so much more effective than reading,” said Jacobson, a former executive with Marvel and Harvey Comics and one of the writers of the comic book classic “Richie Rich.” Jacobson also was the author of another retelling of tragedy, “The 9/11 Report: A Graphic Adaptation.”

The book, even in its two-dimensional comic book flatness, is better able than a wax statue to take the viewer inside the attic where Frank hid from the Nazis. It graphically illustrates where the rooms were situated. It also shows us the joy of Frank’s first kiss with fellow hider Peter Van Pels, the horror of her discovery by the SS, and her mother and sister’s awful death from typhus in Bergen-Belsen.

As the book had broken boundaries when it was published — it has since been translated into Dutch, German, French, Italian and Spanish with plans for a Hebrew edition — I wondered what its author thought about the Frank wax likeness.

“I found it offensive, I think they should have stayed away from it,” Jacobson said, adding that “Ours was done with dignity.”

On the Madame Tussauds website there is this introduction to a museum visit: “You’ll find yourself saying sorry to someone for nearly bumping into them before realizing it’s a wax figure of Penelope Cruz or Johnny Depp. That’s the skill of our sculptors.”

But what if you are not ready for waxen verisimilitude or simply don’t want to bump into Anne Frank?

A few years ago while visiting the Hollywood Forever cemetery in Los Angeles, I was startled by the engraved lifelike images in a section where many Russian Jews were buried. I had never seen an image of the dead on a headstone. They were done in such realistic detail that they creeped me out.

I had a similar feeling at an open casket funeral, which is not a Jewish tradition. On both occasions I was ready to honor the dead and was curious about their life story. But did I want to encounter them? No.

In Judaism, the viewing of a dead person is considered a violation of their modesty. We can look at them, but they cannot gaze back. In Madame Tussauds, when we look into those unblinking Anne Frank eyes, there is no return teenage glare that says, “How could you let this happen?”

And there can be no look that says, “Don’t let this happen again.”