22-year-old athlete is the first Israeli woman to win an Olympic gold medal, Israel’s second in the Tokyo Games. 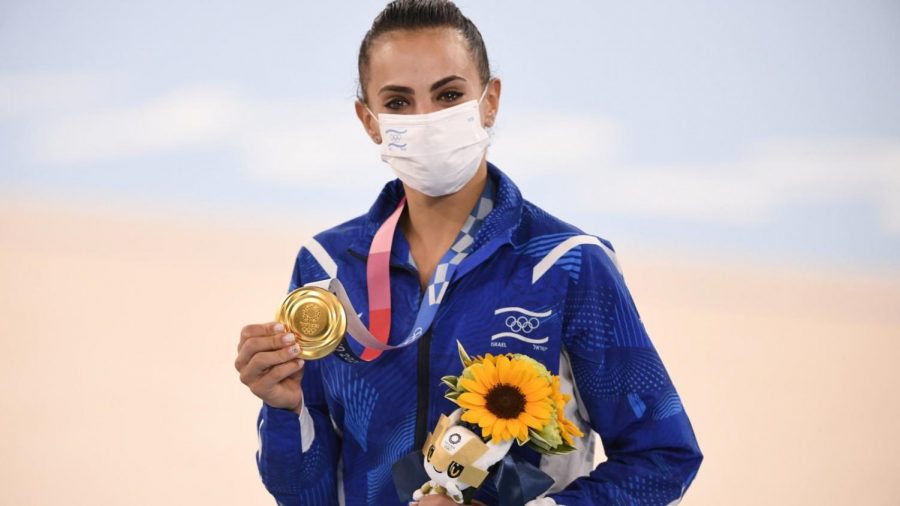 Linoy Ashram with her gold medal for rhythmic gymnastics at the Tokyo Olympics. Photo by Amit Shissel/Israel Olympic Committee

Rhythmic gymnast Linoy Ashram won a gold medal for Israel in the Tokyo Olympics on Saturday, beating out stiff competition in three separate routines with hoops, ball and ribbon.

“It’s what I dreamed of for all my life,” said Ashram, 22. She is the first Israeli woman to win a gold medal and the third overall.

Israel also won two bronze medals at Tokyo – one for taekwondo martial artist Avishag Semberg and the other for the national judo team.

These four medals are the most that Israel has ever won at a single Olympics Games.

The running total in the history of Israel’s participation in 17 Summer Olympics since 1952 now stands at 13, six of them in judo.

Ashram will carry Israel’s flag at the closing ceremony.

But Ashram’s win did not sit well with everyone, especially the Russian Olympic Committee (ROC) who according to the Times Of Israel, “expressed outrage” over the “injustice” of the gold medal win for Israel’s Linoy Ashram in the Olympic rhythmic gymnastics individual all-around final, edging out three-time world champion Dina Averina to end two decades of Russian dominance.

Translated, “The whole world has seen this injustice,” tweeted the ROC. The same account later posted a statement by Averina that read, in part: “My conscience is clear, I still believe that I won.”

The ROC team lodged several inquiries into the scores including for the ribbon routine, but the points stood. Afterward, Averina, the silver medalist, lashed out at the judges.

“I don’t feel that it was fair today and it was obvious from the very first apparatus when… I got a lower score, so I can’t say that it was very fair,” said Averina, who has been nursing a back injury since last year.