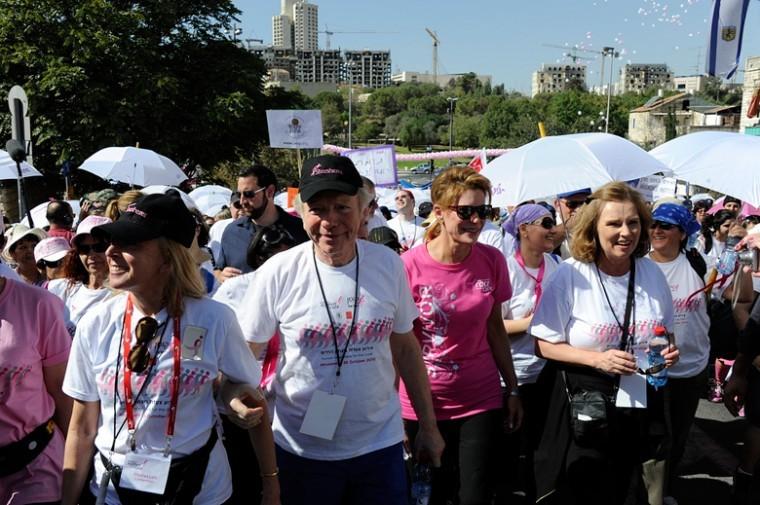 Sen. Joseph Lieberman participates in the Race for the Cure event in Jerusalem in 2010 with his wife Hadassah, left, and Komen founder Nancy Brinker.

JTA
NEW YORK — A senior official at Susan G. Komen For the Cure resigned after the organization was embroiled in controversy over its atempt to defund Planned Parenthood.

Karen Handel, the breast cancer group’s vice president for public policy, resigned Tuesday, just days after the organization backed down from its decision to change grantee guidelines in a way that would have rendered Planned Parenthood ineligible for funding. The decision had sparked outrage in the Jewish world and beyond, with several national Jewish women’s organizations publicly expressing their anger and disappointment in the move.

Last Friday, Komen announced it was reversing itself.

Handel, a former gubernatorial candidate from Georgia whose opposition to Planned Parenthood was well known, was widely believed to be the force behind Komen’s initial decision. In her resignation letter, Handel acknowledged her role in the matter but denied it was motivated by anything other than concern for women’s health. She further noted that the policy change had been fully vetted and that the board raised no objections when it was presented in November.

“I am deeply disappointed by the gross mischaracterizations of the strategy, its rationale, and my involvement in it,” Handel said. “I openly acknowledge my role in the matter and continue to believe our decision was the best one for Komen’s future and the women we serve.”

With Jewish women disproportionately affected by breast cancer, Komen’s work has been embraced by the Jewish community. Both the organization’s namesake, Susan Komen, and its founder and CEO, Komen’s sister Nancy Brinker, are Jewish.

The Komen organization partnered with Hadassah in organizing the first Race for the Cure event in Israel in 2010.