Kerry: Some funds released under Iran deal will go to terrorism 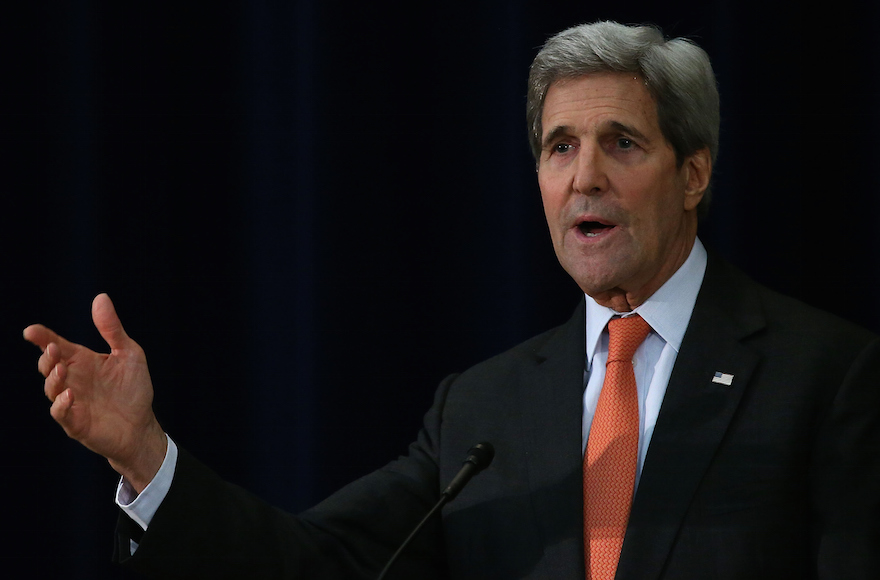 WASHINGTON (JTA) — Secretary of State John Kerry said Iran would likely use some money freed by the lifting of sanctions for terrorism, but if it does, it will be subject to separate sanctions.

“I think that some of it will end up in the hands of the IRGC or other entities, some of which are labeled terrorists,” Kerry said Thursday at the World Economic Forum in Davos, Switzerland, in an interview by CNBC reported by The Associated Press. The IRGC is an acronym for the Iran Revolutionary Guards Corps.

“You know, to some degree, I’m not going to sit here and tell you that every component of that can be prevented,” he said. “But I can tell you this, right now, we are not seeing the early delivery of funds going to that kind of endeavor at this point in time.”

The Obama administration lifted nuclear-related sanctions over the weekend after U.N. inspectors confirmed Iran had complied with its obligations under the nuclear roll back for sanctions relief deal achieved last year between Iran and six major powers.

Kerry said IRGC and other terrorist groups would still be subject to separate sanctions should the new money be used toward attacks.

“We have made it very clear that we use sanctions when we think they are appropriate in order to counter behavior that we believe has broken the law or has challenged the United Nations Security Council or threatened the United States and we stand by our sanctions,” he said, referring to new sanctions imposed on Iran this weekend because of its test launch of a ballistic missile.

Israeli Prime Minister Benjamin Netanyahu, who is also in Davos, vigorously opposed the deal, but has also committed himself to working with the Obama administration to make sure its safeguards are strictly implemented.

Netanyahu met at Davos with Kerry and Vice President Joe Biden, and both U.S. officials described the meetings favorably.

Biden’s office said the two leaders “discussed regional developments, including Syria, the campaign against ISIL [an acronym for the Islamic State terrorist group], the implementation of the Joint Comprehensive Plan of Action to verifiably prevent Iran from acquiring nuclear weapons, steps to counter Iran’s destabilizing activities, and opportunities for Israel to expand energy partnerships with countries in the eastern Mediterranean to enhance regional prosperity and cooperation.”