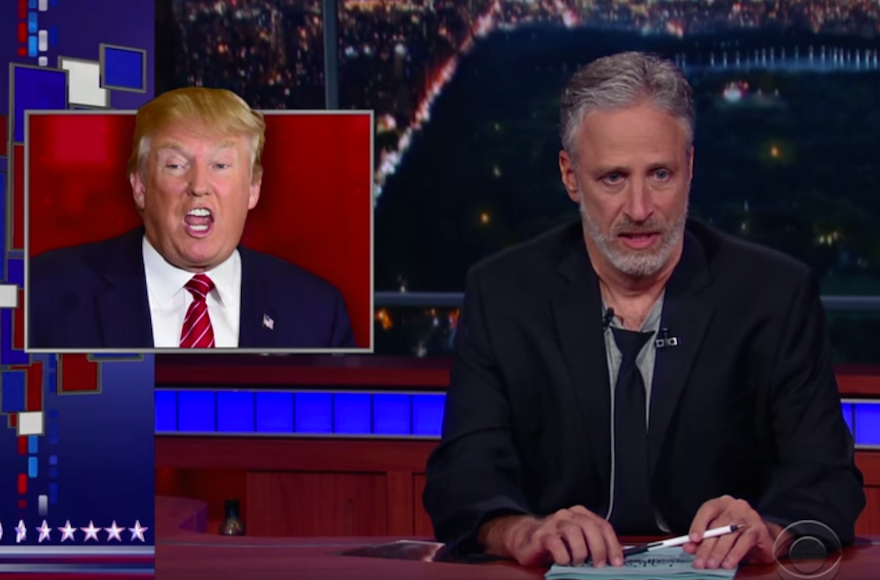 Donald Trump’s long, dark speech at the Republican National Convention in Cleveland this Thursday left many viewers pining for some comic relief. Luckily, they got that and more with the return of a familiar Jewish voice: Jon Stewart.

The beloved comic and political satirist came out of his late-night retirement for a few minutes on “The Late Show with Stephen Colbert” to do what he always did best — offer some biting political commentary and take on his “favorite” news outlet, Fox News.

Colbert started the segment by discussing former Fox News CEO Roger Ailes’ departure from the cable channel company following sexual harassment accusations. But he invited Stewart, who appeared from underneath Colbert’s desk, to share his “lack of pleasure” at the media mogul’s resignation (they were both heard celebrating off screen after asking for the cameras to be turned away). Then, to much cheering, Stewart asked to borrow Colbert’s desk for some commentary on Trump’s speech.

“I thought Donald Trump was going to speak — Ivanka said he was going to come out, she said he was really compassionate and generous,” Stewart said. “But then this angry groundhog came out and just vomited on everybody for an hour.”

With the Rio Olympics coming up, Stewart said he will enjoy “the gymnastics portion of the program” — or the “contortions that many conservatives will have to do now to embrace Donald J. Trump.”

As he often did at the news desk of “The Daily Show,” Stewart then proceeded to roll out short clips from Fox News, showing various Fox commentators disparage Barack Obama for traits that they now applaud in Donald Trump. He took particular aim at Sean Hannity, calling him “Lumpy.”

So Donald Trump may be ushering in a new era of politics, but for Jon Stewart fans, Thursday night offered a window back to the good old days of “The Daily Show.”

Watch the full segment below: