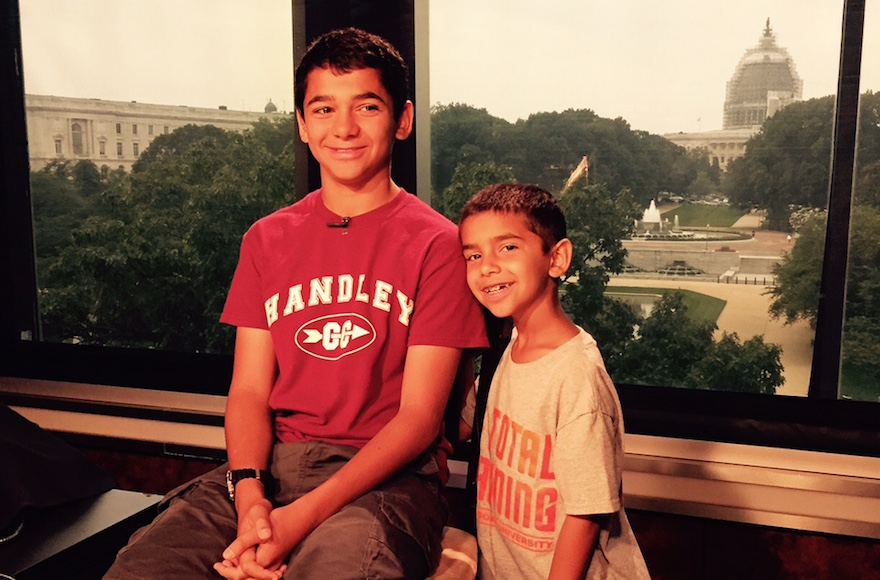 Joseph Rosenfeld, left, and his brother, Adam, visit the Fox & Friends studio in the District of Columbia on Wednesday. (Scott Rosenfeld)

BOSTON — Joseph Rosenfeld, a 15-year-old Jewish math enthusiast from Virginia, has the world abuzz about the golden ratio, after questioning the accuracy of a display at the Museum of Science in Boston.

Rosenfeld, a sophomore at Handley High School in Winchester, Virginia, is suddenly in the media spotlight, with coverage from the Boston Globe, Britain’s Daily Mail and Fox & Friends, where he was interviewed Wednesday.

He’s taking the unexpected media attention in stride. “I’m surprised. I didn’t think anyone would be this interested in math,” he told JTA Wednesday in a phone conversation that also included his father, Scott Rosenfeld.

The museum, which originally agreed with Rosenfeld, has since changed its view but is taking advantage of all the attention to math.

Rosenfeld has been invited back for a special visit to the new “Science of Pixar” exhibit, he told JTA.

On his annual visit to the museum last month, Rosenfeld noticed minus signs in the museum’s formula for the golden ratio in the “Mathematica” exhibit, developed in 1981 by designers Charles and Ray Eames.

The moment recalls the dramatic scene in “Good Will Hunting” in which an MIT janitor, played by Matt Damon, solves an extremely difficult math equation written on a whiteboard at the university. 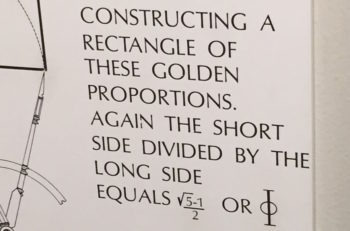 Joseph Rosenfeld noticed that at the Museum of Science in Boston, Mass., the golden rule is written with minus rather than plus signs and snapped a photo, above, June 4, 2015. (Scott Rosenfeld)

Rosenfeld was expecting to see the golden ratio expressed with plus signs, he told JTA. That’s how he had learned it in middle school, where he studied it for a special project.

The golden ratio, a special number approximately equal to 1.618, is found throughout history, in art, geometry, nature and architecture, going back to the Greek Parthenon, the Egyptian pyramids and works by Renaissance man Leonardo da Vinci, as well as modern architects.

After checking some websites and snapping a photo, Rosenfeld left a note and then followed up with an email.

The museum responded promptly – initially acknowledging that there was an error. But on Tuesday, it issued a statement confirming that the exhibit is accurate.

“It’s not at all surprising that this enterprising student noticed the minus signs because the way the museum presents the Golden Ratio in its exhibit is in fact the less common — but no less accurate — way to present it. It’s exciting that people around the country are talking about math and science and that, in the process, we learned something too. Let’s hear it for STEM education and for Joseph Rosenfeld!” the statement said.

Mathematician Ira Gessel, a math professor at Brandeis University, doesn’t see what all the fuss about. In an email to JTA, he said he agrees with the museum’s statement and that the formula in their exhibit is correct.

Rosenfeld, a member of the youth advisory committee on the Sheandoah Valley Discovery Museum in his home town, said he now understands that both formulas are correct and that the exhibit uses the less common one.

Scott Rosenfeld told JTA that the family, members of Beth El Congregation in Winchester, Virginia, travels widely and has visited Israel and South India. Joseph especially enjoyed his visit to Jerusalem, he said.

Joseph’s friends have been congratulating him, but other than some more media interviews, he’s not expecting any other changes to his summer. Still, he said, “I’m definitely excited about going to the Pixar exhibit.”