Jewish Republicans tackle a thorny question: What to do about Republicans like Steve King? 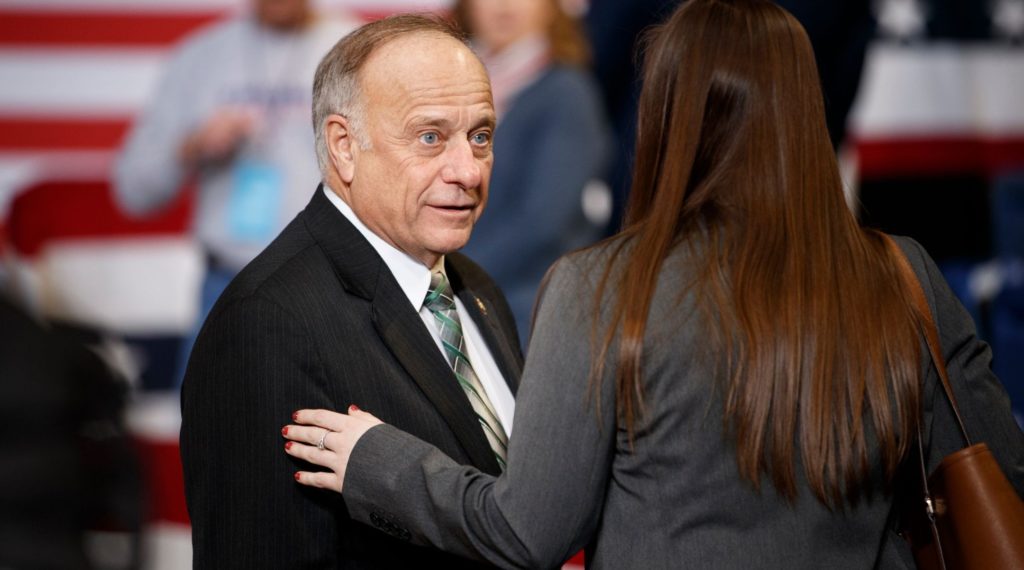 WASHINGTON (JTA) — The Republican Jewish Coalition is best known for scorching ads challenging the pro-Israel credentials of Democratic candidates. This election cycle, however, it is leading the charge against a GOP congressman: Steve King of Iowa.

After years of flirting with white nationalists, King in January 2019 came out and said it: What, he asked, was so offensive about the term “white supremacist”? The GOP House leadership banned King from membership of committees, where Congress members are best able to accrue influence.

Now, with a tough primary on June 2, King is pushing for his party’s congressional leaders to boost his chances by letting him back on the influential Agriculture Committee.

Not only is the Republican Jewish Coalition leading the charge to keep King in the GOP doghouse, the group wants him out of office altogether. Its political action committee recently announced that it was backing Randy Feenstra, the Iowa state senator who is challenging King in the primary.

The rollout of the Feenstra endorsement was robust and unabashed.

“We have made it clear for some time that Rep. King does not represent the values of the Republican Jewish Coalition or the Republican Party,” the organization declared in its May 7 announcement. “Rep. Steve King’s record includes inflammatory rhetoric condoning white supremacists and anti-Semites.”

The decision to devote resources to knocking off a fellow Republican (even in a primary) is a rare step for the RJC. It is even more noteworthy during an all-time polarized election cycle, featuring expensive and highly contested multi-state fights for the presidency and the U.S. Senate.

The fight also underscores the group’s success in wielding influence with the Republican leadership, despite its decades-long failure to win over Jewish voters. It certainly helps when your most prominent member, Sheldon Adelson, also happens to be the single largest individual donor to the Republican Party.

But party-aligned interest groups like the RJC are influential not just because of donors, but also because the parties look to them to take the lead on issues the interest group most cares about. The RJC making a case that a Republican is trafficking in anti-Semitism or white supremacism carries more weight than when it comes from an outside group.

So how do you take on one of your own? Here are a few key steps from the RJC playbook.

The Republican Jewish Coalition isn’t taking anything for granted. The group is coordinating its messaging in Iowa’s 4th District with the U.S. Chamber of Commerce, Matt Brooks, the RJC’s executive director, told the Jewish Telegraphic Agency.

“We’ve got a great relationship with the chamber and talk all the time with them,” Brooks said.

Brooks would not say how much his group would spend and was reluctant to provide details of the joint strategy in order not to tip off King, but said it involved “on-the-ground stuff” and “peer-to-peer texts.”

The RJC also has been consulting since at least January 2019 with the GOP leadership on the dangers it believes King poses. That’s when King told a New York Times reporter that he did not understand why “white supremacist” was offensive. The RJC was among a number of Republican constituents that asked the House GOP leadership to request that Rep. Kevin McCarthy, the incoming House minority leader, have King kicked off committees.

“We had multiple conversations with leadership in our party about our concerns, and the fact that we felt this to be unacceptable, across the board everybody agreed with us,” Brooks said.

King’s campaign did not return a JTA request for comment. His congressional office said King rejected white nationalism and white supremacism, and noted his comments at the time of The New York Times article delivered on the floor of the House: “I want to make one thing abundantly clear; I reject those labels and the evil ideology that they define. Further, I condemn anyone that supports this evil and bigoted ideology which saw in its ultimate expression the systematic murder of 6 million innocent Jewish lives.”

Brooks said isolating King was an easy pitch to a GOP leadership already seeking to distance itself from a congressman who seemed perpetually mired in controversy. Rep. Steve Stivers, R-Ohio, a member of the Steering Committee that determines committee memberships, credited the RJC for keeping King on the front-burner.

“Steve King was not removed from his committees because of one New York Times article,” Stivers told JTA in an email. “He has demonstrated a continued pattern of racism throughout his time in Congress, that groups like the Republican Jewish Coalition have worked to keep at the forefront of the discussion.”

Stivers did not endorse Feenstra but said: “I’m grateful that the RJC has taken steps to support a primary challenger. It is rare, but I believe it is absolutely warranted in this instance.”

Getting King off a cherished spot on the Agriculture Committee made him vulnerable in Iowa, Brooks said.

“Credit really goes to Kevin McCarthy. The people of Iowa understand that in a critical time for the agriculture industry and for the farmers of Iowa, with all this going on,” the RJC leader said, referring to the crunch on farming precipitated by the coronavirus pandemic, “to have a member of Congress that doesn’t have a say and doesn’t have a seat on the Ag Committee to represent their interests is a huge issue.”

Pick the right person to back

Feenstra, 51, has deep roots in the state’s Dutch-American community, a track record in the state legislature and the backing of national Republicans. He also, according to The Economist, has outraised King $416,000 to $43,000.

So he’s a no-brainer, but it’s not always this easy. In March the RJC announced that it would target Kentucky Rep. Thomas Massie, a GOP gadfly, and back his opponent, Todd McMurtry.

The stars seemed aligned: The RJC had long disliked Massie, who voted against a Holocaust education bill this year and a resolution last year condemning the boycott Israel movement. In March, Massie infuriated Republicans and President Donald Trump by exercising a prerogative to convene a House majority amid the pandemic. McMurtry was a lawyer who earned conservative plaudits for defending high-schoolers caught up in a fraught encounter with Native American protesters.

Then it emerged that McMurtry had a string of racist and offensive tweets in his past, and the RJC pulled its support for him as fast as it had granted it.

That reversal is not unique to Republicans this cycle: Some Detroit-area Jewish Democrats considered backing Brenda Jones as a challenger to Rep. Rashida Tlaib, the freshman Democrat who does not recognize Israel’s right to exist as a Jewish state. Jones had briefly been the congresswoman. Then it turned out Jones had associations with Louis Farrakhan, the anti-Semitic leader of the Nation of Islam.

Brooks said the white supremacy issue will be central to the campaign.

“We’re going to talk very clearly about his defense of white nationalism and his embrace of white supremacy,” he said.

But it’s not just about the bigotry. Another focus will be on how impotent King is without a seat on a committee. King said recently that he had McCarthy’s word that he would consider King’s exoneration. McCarthy flatly denied it.

Stivers said King was a lost cause.

“As long as I am a member of that committee, I will not allow hate and bigotry to influence the legislation passed by Congress,” he said. “That’s why Steve King will not be serving on any committee.”

In some cases, the issue dear to the hearts of partisan activists disappears from the messaging.

The political action committee of the Democratic Majority for Israel ran two ads in Nevada and Iowa ahead of nominating contests in those states that praised Vermont Sen. Bernie Sanders but argued that his health and his left-wing policies made him unelectable. There was no mention in the ads of Israel, although Sanders’ tough policies, including leveraging assistance to the country to bring it into line, was the group’s principal problem with Sanders.

“We had less than 30 seconds to make the most persuasive case we could. That’s what we did and it worked,” Mark Mellman, the president of the Democratic Majority for Israel, said in an email. “We wanted to do it in a way that would not damage the party and were very clear and very public about all the reasons for our opposition.”

In a lengthy statement on its site, the Democratic Majority for Israel explained that the ads were created primarily because the group believes that removing Trump from office is paramount.

“Second, we have seen a troubling pattern emerge as Senator Sanders, and those around him, continue to be uniquely hostile on the Israel issues central to our mission,” the statement said.

Even when it’s about your guy, make it about the other guy

Modesty does not become partisans: If you’re doing the right thing, make sure everyone — and especially your rivals — knows it.

Since launching the campaign targeting King, Brooks has tweaked his counterpart at the Jewish Democratic Council of America, Halie Soifer, for not backing primary challenges to Tlaib and Ilhan Omar of Minnesota, who both back Israel boycotts.

“Our guys have never shied away from speaking up and trying to take candidates out,” he said. “It would be nice to see something comparable on the other side.”

Soifer said the RJC’s enthusiastic backing for Trump, whom she said was as guilty as King of flirting with white nationalism, dwarfed any positives it accrued by targeting King.

“If the RJC is talking about the struggle of going against someone in your own party, they should look in the mirror and consider how it’s possible they could still support the president of the United States,” she said, noting Trump’s past equivocations in condemning white nationalists.

Brooks said that Trump’s policies have been robustly against anti-Semitism, noting his executive order last year targeting the bigotry.

“I don’t think there’s a single president in the history of our presidents who has done more to stand up and combat anti-Semitism,” he said.