Jewish observance becomes an issue in a New York primary

(JTA) — An already unorthodox primary season is taking an even stranger turn in a race for a New York House seat.

Rep. Thomas Suozzi, a centrist Democrat, is being challenged from the left by Melanie D’Arrigo and Michael Weinstock in the 3rd Congressional District covering northwest Long Island and a chunk of the borough of Queens.

D’Arrigo is attempting to derail Weinstock’s campaign, alleging that he included ineligible signatures on his petition to register as a candidate. The two are meeting in a virtual state Supreme Court hearing on Tuesday.

Weinstock, who says he is observant Jewishly, is arguing that the filing is illegal because he was served on Shabbat. In New York state, serving non-criminal legal motions on Sunday is illegal, and the rule can be extended to “a Saturday if service is upon someone who celebrates Saturday as the Sabbath.”

“I was getting something to eat in the kitchen — when the man approached my front door, wearing a mask,” Weinstock said in an email to the Jewish Telegraphic Agency, describing the April 4 serving.

D’Arrigo’s lawyer, Arthur Schwartz, says Weinstock is not observant and dismissed the protestations as a “stunt.”

“He wasn’t ‘served’ by a process server, the Judge required overnight mail, and it was sent by UPS,” Schwartz said in an email. “The delivery person left it outside his door. Despite his supposed observant beliefs, Weinstock then went outside, picked up the envelope, and brought it inside.”

According to most Orthodox interpretations of Jewish law, receiving and opening mail violates Sabbath observance.

Weinstock rejoined: “According to this man, an observant Jew would never bring the Fedex package inside, place it on a table and open the package the following morning.”

Weinstock is asking for the filing to be dismissed because of the Shabbat serving, although he said he will not pursue sanctions against Schwartz and D’Arrigo.

“There’s a pandemic going on and thousands of New Yorkers are dying,” Weinstock said. “Nobody should be calling the cops, or initiating a legal proceeding unless there’s an actual emergency.”

Schwartz said Weinstock’s Jewishness does not feature on his “About Michael” campaign site page, and noted his own Jewishness in an email.

“I am a proud Jew who fights anti-Semitism all the time,” Schwartz wrote. “Child of Russian immigrants; my dad spoke Yiddish before he spoke English. Active in my synagogue and my daughters teach Hebrew School. Weinstock is a bs artist who is using his religion to avoid the fact that he doesn’t have enough valid signatures.”

While Weinstock does not explicitly refer to himself as Jewish on the “About” page, he does describe reuniting New York state Assemblyman Tony D’Urso with the Italian Jewish family that D’Urso helped hide from the Nazis. As part of that trip, D’Urso and Weinstock met Pope Francis, and a photo at the top of the page shows Weinstock wearing a yarmulke at the meeting.

Weinstock’s Jewishness features prominently elsewhere on his campaign site: His campaign launch video, for example, posted in April 2019, is titled “Hip Kosher.” (He’s seen thumbing through a cookbook of the same name.) There are links to news articles in which he discusses Jewish aspects of his life.

Schwartz and Weinstock both say they are ready to drop the case, originally brought by the D’Arrigo campaign, and each blames the other side for keeping it alive.

Both candidates face an uphill battle in their bid from the left to oust Suozzi in the June 23 primary. Suozzi succeeded Steve Israel, a longtime Jewish congressman from the district. Both Israel and Suozzi strived to maintain centrist credibility in a district that includes deep pockets of conservatism. 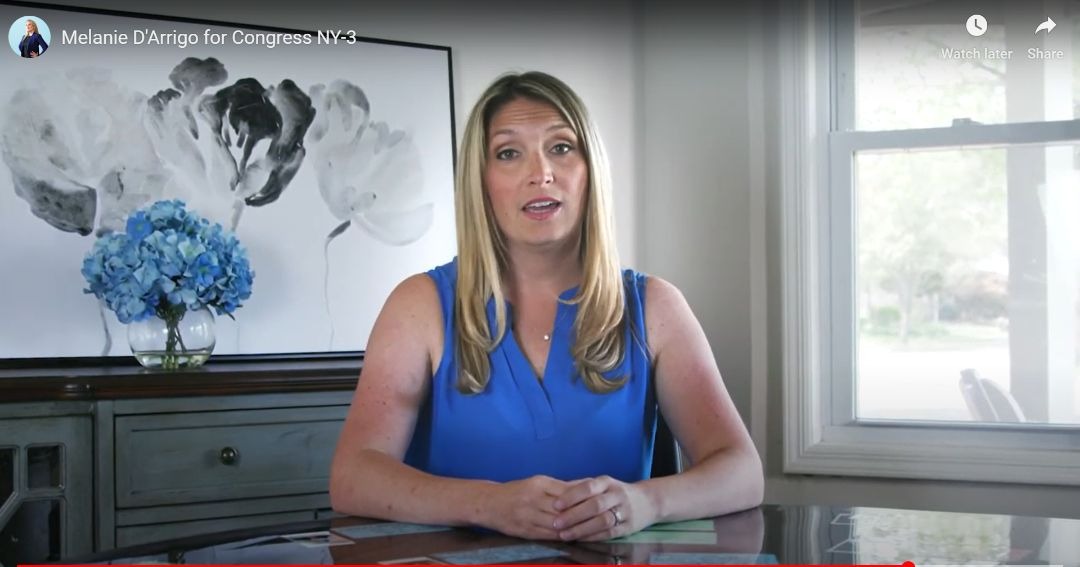 Melanie D’Arrigo is seen in a campaign ad. (Screenshot)

Weinstock is a former prosecutor and a former volunteer firefighter who rushed to rescue people during the 9/11 attacks in 2001.

“I’ll not only be the first 9/11 firefighter elected to Congress, I’ll be the first openly gay person to represent New York City in Congress,” he says in his campaign video. “How cool is that?”

D’Arrigo, who calls herself “a grassroots activist, mom and health care advocate,” has cultivated comparisons to Rep. Alexandria Ocasio-Cortez, an insurgent young New York female candidate who in 2018 ousted a pillar of the party’s center. D’Arrigo has participated in the Women’s March, and told Elle magazine that she was sexually assaulted as a child.

Weinstock, who prosecuted sex crimes for five years, has filed a sexual harassment lawsuit against Gerard Terry, a one-time Long Island power broker who was jailed for tax fraud. Suozzi pleaded for leniency for Terry, and Weinstock has said that Suozzi’s intervention triggered his primary challenge.

If that stew of issues weren’t fraught enough, D’Arrigo’s campaign, filing its challenge to Weinstock’s petition signatures on March 23, simultaneously filed a signatures challenge against another primary candidate — Melanie D’Arrigo.

How did a candidate end up challenging herself? It’s never been made clear.

D’Arrigo called it a “miscommunication” and the campaign withdrew the complaint.