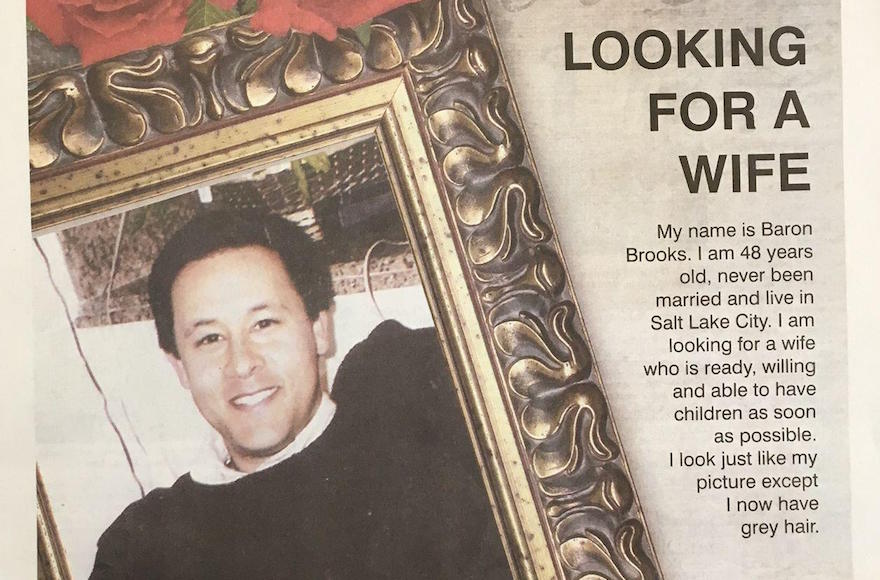 The “Looking for a Wife” advertisement Arthur Brooks bought for his son in the Coeur d’Alene Press, June 18, 2016 (Screenshot)

It sounds like the premise of a romantic comedy: A Jewish dad eager to see his middle-aged son settle down takes out a full-page newspaper ad on his behalf titled “Looking For A Wife.”

Last Saturday, real-life Jewish dad Arthur Brooks took that unusual step — without the permission of knowledge of his son, Baron Brooks. The color advertisement ran in the Coeur d’Alene Press, a paper in northern Idaho, where neither father nor son live and which is not exactly a hot Jewish dating market.

Arthur Brooks, 78, of Beverly Hills, California, emphasized in the ad that the eligible woman must be willing to relocate to Salt Lake City, where Baron Brooks, 48, lives, and to stay at home and raise any future offspring.

According to the ad, the younger Brooks is “looking for a wife who is ready, willing and able to have children as soon as possible.” While age (ideally between 34-38) is “flexible,” women over 5’8” are discouraged (“I am 5’5””), especially if they wear high-heels, and potential wives must be politically conservative.

Support for President Barack Obama or Democratic presidential candidate Hillary Clinton are deal-breakers: “If you voted for Obama or plan to vote for Hillary you are not for me.”

“I am Jewish but not very religious in a formal sense although I am spiritual,” the ad says.

Baron Brooks, a broker in the health food trade, told the Spokesman-Review newspaper in Spokane, Washington, he was shocked and infuriated to learn of the ad.

“I can’t even describe to you how embarrassing and ridiculous this is,” he said.

The younger Brooks told the Washington paper his father is “nuts,” “neurotic,” “passive-aggressive” and lacking boundaries. (Clearly neither father nor son consults with the other before talking to newspapers.)

But Arthur Brooks has been ill, he told the paper, and really wants a grandson to carry on the family name.

“Ever since he went into congestive heart failure he’s done some really kooky stuff,” Baron Brooks said. “And this one takes the cake.”

Nonetheless, Brooks plans to allow his father to go ahead with plans to interview potential wives this Saturday at the Coeur d’Alene Resort.

“Who knows, it can’t hurt,” he told the Spokesman-Review. “Who the hell knows?”

Asked why his father chose an Idaho paper, Brooks said he was likely drawn to the area’s conservative politics.

“He knew I’m a political conservative, OK?” said Brooks. “And most Jewish girls are quite liberal, and that doesn’t work for me. You probably are going to get more like a Midwest-type values in Idaho – somebody’s who more right of center than you would, say, in Los Angeles.”