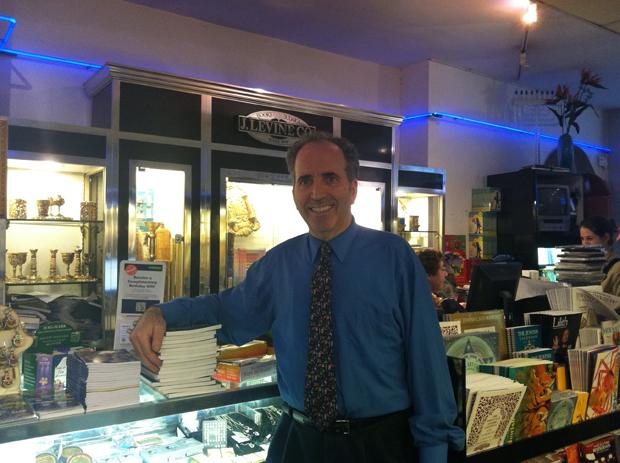 Daniel Levine, fourth-generation owner of Manhattan's J. Levine Books and Judaica, says that while online booksellers such as Amazon hurt his business a decade ago, now he's been able to use the Web to boost his sales.

NEW YORK — The books are in the back at J. Levine Books and Judaica.

Before finding the volumes of Jewish titles at the midtown Manhattan store, customers encounter a rotating display of mezuzahs on the left, followed by shelves of kiddush cups and a rack featuring a Hebrew-language version of the wordplay game Bananagrams. Sitting on the colorful shelves to the right are kippot, tallitot and assorted Jewish toys.

Finally, one reaches the tractates of Talmud, prayer books, commentaries and modern Jewish novels. Due to the space taken by the other items, some of the titles that once adorned the shelves are now stored in the back room.

Like many traditional bookstores, J. Levine is wrestling with an adapt-or-die reality as it competes with online mega-booksellers such as Amazon. The brick-and-mortar shops have developed a variety of strategies to stay profitable and deal with declining book sales.

Some, such as J. Levine, have had some success in turning around losses. A number are beginning to rely more on Judaica than the once primary staple of  books as they seek to maintain a steady stream of loyal, local customers.

“At the beginning it was a disaster,” said Daniel Levine, the fourth-generation owner of J. Levine. “Now the Internet is only helping us. All of our new business comes just from Google. It has helped us remain a player in the book world.”

Levine said his business dropped 18 percent from 2000 to 2005 as customers moved to Amazon. But since then the store’s sales have risen 20 percent, as Levine acclimated to the new environment of online commerce. As more people began using Google to find bookstores, the mid-Manhattan location helped increase the traffic to J. Levine.

Aside from the increased traffic to the store’s website, Levine attributes the rise in business to a growing emphasis on selling Judaica. He says that ketubahs, tallitot, kiddush cups and the like sell at a higher profit margin than Bibles or the latest book on Israel.

Not everyone is as fortunate.

For Rosenblum’s World of Judaica in Skokie, Ill., a suburb of Chicago, focusing on Judaica has not offset deep cuts necessitated by the recent economic downturn. In 2005 the store had nine employees; today it has five. Likewise, Rosenblum’s has cut much of its advertising budget in recent years, said owner Avi Fox.

“We can’t buy books for the prices Amazon is selling them,” he said.

But he is more concerned about competition from Jewish book publishers such as the Orthodox ArtScroll Mesorah Publications. ArtScroll sells books wholesale to Jewish bookstores as well as directly from its website, offering discounts up to 30 percent and free shipping.

ArtScroll’s management says that by showcasing its offerings in catalogues and online, the company is actually supporting retail stores in Jewish population centers. Its co-founder, Rabbi Meir Zlotowitz, says ArtScroll offers steep discounts to its retailers and that “bookstores can always give a better price than we do.”

Another strategy is employed by the Boston area’s Israel Book Shop, which is offsetting a drop in sales through an affiliation with its own Jewish publisher, Israel Book Shop Publications in Lakewood, N.J. The two businesses are separate, but the store promotes the publisher on its website, and the publisher offers discounts to the store.

Israel Book Shop’s owner, Chaim Dovek, calls having the brick-and-mortar store a “huge advantage” because it allows him to store inventory for the website and serves as a spot for customers to “socialize and browse.” In fact, he says the majority of the shop’s sales come from the store and not from its website.

These owners also compete with Amazon through their own websites, but some of those efforts fall short.

West Side Judaica, on the Upper West Side of Manhattan, caters to a cross-section of the Jewish community. It aims to stay afloat the old-fashioned way — by relying on local customers and endorsements from local synagogues. The store shut down its website because it wasn’t sufficiently profitable. Owner Yakov Salczer says the store’s sales have declined 30 percent during the past five years. But he has not lost hope in spite of the tough climate.

“Hashem has a plan,” Salczer said. “Customers come to me because they want to support me. The only reason I’m still in business is because I have local customers supporting me [and] support from the local synagogue.”

But according to the director of the Jewish Book Council, Carolyn Hessel, today’s bookstores will survive in the future only by investing in online commerce.

During the past few decades, Manhattan has seen a sharp decline in the number of Jewish bookstores. Levine noted that at least four local Judaica stores have closed since the 1990s. Before World War II, he said, there were dozens of such stores in Jewish neighborhoods like the Lower East Side. Now only two remain: his and West Side Judaica.

Levine, however, hopes the reputation afforded by his 120-year-old shop’s history will help keep it alive for generations to come. Although he sees the value of buying Judaica on the Internet, he still thinks customers will continue to appreciate the advantages of a traditional Jewish bookstore.

“Can you see the ketubah you’re buying online?” he said. “How can you figure out what the real color is, what the feel is? How can you feel a tallis made out of silk? Are these the types of things that people are going to give up forever? I don’t think people will really do that.”