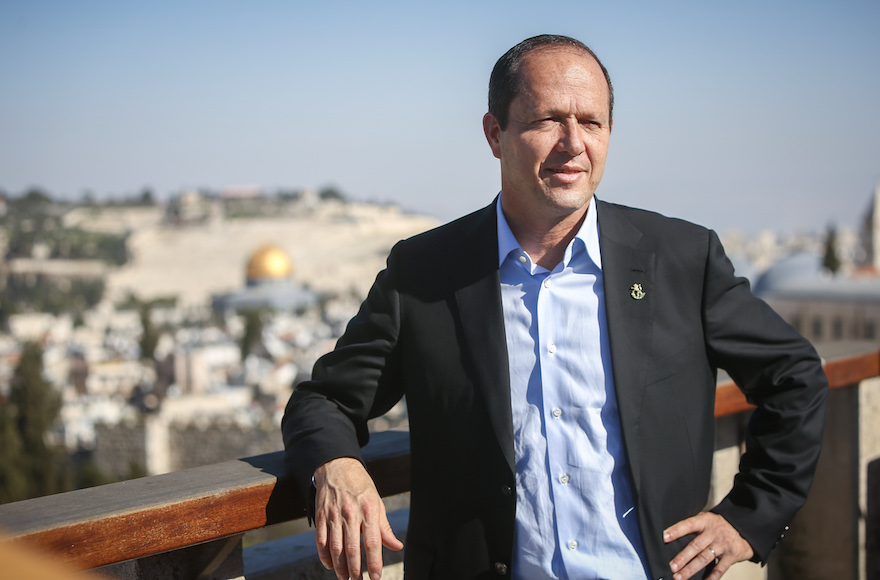 JERUSALEM (JTA) – It’s been nearly 50 years since Israel captured eastern Jerusalem, including the Old City, from Jordan in the 1967 Six-Day War. For the past eight years, Nir Barkat has been this city’s mayor.

On Sunday evening, six months ahead of the “united Jerusalem” jubilee, Barkat received an honorary doctorate from Yeshiva University at the Waldorf Astoria in New York City, where he gave the keynote speech. A staunch advocate of Israeli control over all of Jerusalem, he thanked President-elect Donald Trump for his “commitment to strengthen our city by moving the U.S. Embassy home, to Jerusalem, the united and eternal capital of the Jewish people and the State of Israel.”

Late last month, Barkat sat down with JTA in his Jerusalem office to discuss in more depth his vision for the city. Having made a fortune as a high-tech entrepreneur, he easily slipped into industry jargon, speaking of the need to increase Jerusalem’s “market share” of the hearts of Diaspora Jews. He also said that all its residents were his “children.”

Barkat made clear that he sees Jerusalem as an integral part of Israel and should not be part of negotiations with the Palestinians, and expressed confidence that Trump – with whose Jewish son-in-law, Jared Kushner, he is friendly – shares his vision.

The interview has been edited for length and clarity.

JTA: What does it mean for you to receive this honorary degree?

Barkat: For me, it’s recognition of the changes happening in the city of Jerusalem. The honorary degree is being received on behalf of the residents of Jerusalem. I feel very proud that indeed Jerusalem is going in the right direction, but there is lots of work still to do. Toward its jubilee next year, I think it sharpens the fact that we all need to do everything we can to improve the city year after year.

What are the positive changes you see in Jerusalem?

Jerusalem is going through economic growth, fast economic growth, and a cultural renaissance. Practically in almost every parameter we look, this city is making progress relative to years before and relative to its peer group. I think Jerusalem is fulfilling a very important role in the world of how do you make so many different people work in one city, in one inclusive economy, with democratic values.

Jerusalem also faces problems. Palestinian terrorism surged here earlier this year, and it is still the poorest city in Israel. How do you deal with problems like that on the municipal level?

With respect to the round of violence we had, you have to understand that today Jerusalem is 10 times safer than New York. When you look at, for example, the murder rate for crime and terror together, your chances of getting killed in the streets of New York are 10 times higher than the city of Jerusalem. I settle for being one of the safest cities in the world, focusing on economic growth and making the city tick better, work better.

We have a lot of poor people, but this city is moving year after year as a better place to live. And the more we develop our economy and education system and infrastructure, that will naturally reflect on having a better future. 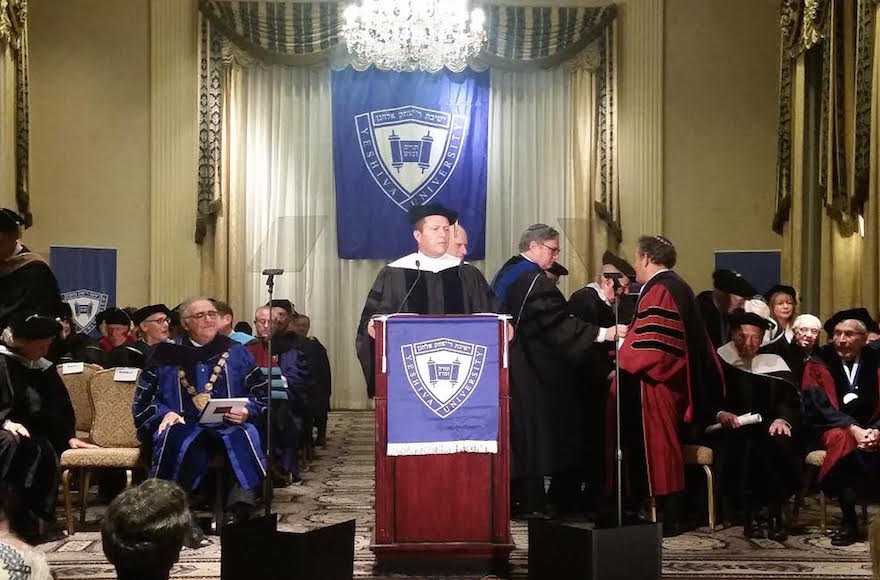 Jerusalem Mayor Nir Barkat delivering the keynote speech after receiving an honorary degree from Yeshiva University at the Waldorf Astoria hotel in New York City, Dec. 11, 2016. (Courtesy of the City of Jerusalem)

As the mayor of Jerusalem, why is it important for you to reach out to the Diaspora?

For thousands of years, every Pesach [Passover] and every wedding and practically every major occasion, the longing for returning and building and connecting to Jerusalem is in our prayers and it’s in our hearts. Everyone is a shareholder in the city of Jerusalem. It’s the capital of the Jewish people forever, and I think developing that relationship, increasing that market share of people’s hearts, is in the mutual benefit of the city and the Jewish people around the world. And my role as mayor is to expand that relationship and bonding.

Why must Israel retain control of all of Jerusalem when the Palestinians claim the eastern part of the city as their capital?

There’s a very famous phrase in the Bible that Jerusalem makes all peoples friends. Jerusalem had and has and will always have a special role of including people. God forbid, if you divide Jerusalem it will never function. It’s one economy. It’s one vision. It will never ever function as a divided city, as it did not function for 2,000 years.

Since the reunification of the city of Jerusalem, we’re working very hard to catch up with neglect and investments. There’s lots of work to do, but the philosophy is only one, and by the way, there’s no split city in the world that ever functioned. So Jerusalem is off the table, off the negotiation table, and our goal is to make it better for all residents of the city — Muslims, Christians and Jews. They’re all my children. I need and I do take care of all of them in order to improve quality of life for all.

Do you think President-elect Donald Trump shares your vision of Jerusalem?

It seems that the vision and the understanding of the Trump administration is more aligned with the understanding of myself and Prime Minister Benjamin Netanyahu. The statements that have been said support that feeling that indeed it’s going to be different. The prior administration had different thoughts as to the future of the city of Jerusalem and other elements, and hopefully that change will indeed be executed. I have good reasons to believe that’s going to be the case.

Would you like to see Trump move the U.S. Embassy to Jerusalem as he promised during his campaign?

Not only I, not only Israelis, I also think the majority of Americans would like to see the embassy moved. It’s a statement of understanding the role and the importance of Jerusalem for the Jewish people. It was disappointing that it did not happen so far, but it’s better late than never.

Do you expect to be freer to build your vision of a united Jerusalem with Trump in the White House?

With the prior administration, every once in a while, we heard the sort of statement like: Freeze building in Jerusalem. So I asked the administration: Freeze what exactly? Freeze everything? Or God forbid, do you mean that I have to ask somebody if he’s Jewish or Muslim or Christian before I as mayor of Jerusalem give him a license? It’s against the American Constitution.

When we plan Jerusalem and develop it, our master plan that we share with people shows and demonstrates that we indeed are honest and fair and enable all growth — of Muslims, Christians and Jews in the city of Jerusalem — on an equal basis. I believe and hope that the new administration understands that very, very well and will let us build Jerusalem for the benefit of all residents.