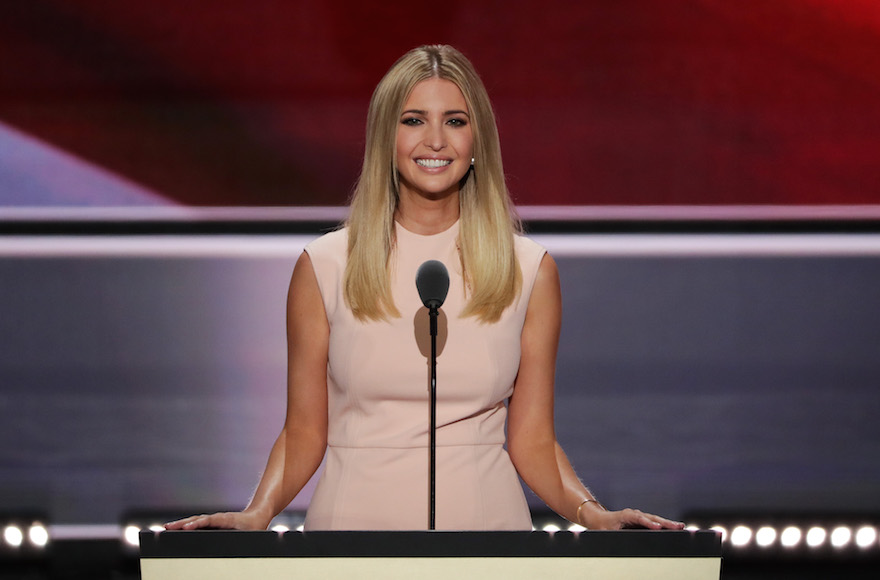 Ivanka Trump speaking during the evening session on the fourth day of the Republican National Convention at the Quicken Loans Arena in Cleveland, Ohio, July 21, 2016. (Alex Wong/Getty Images)

CLEVELAND (JTA) — Thursday night, it turns out, would not be the night Donald Trump made his “pivot,” or toned down his rhetoric to appeal to a broad spectrum of Americans. But there was a Trump who made overtures to the wider electorate, with friendly language and — in the context of a Republican convention — gutsy policies. Her name is Ivanka.

Following a couple paragraphs of Trump-style bravado (America will know “what it is like to win again”), Ivanka hit the crowd with a surprise: After a year of campaigning with the Republican nominee, she’s not a Republican.

“Like many of my fellow millennials, I do not consider myself categorically Republican or Democrat,” she said. “More than party affiliation, I vote based on what I believe is right for my family and my country.”

That message is similar to one Donald Trump has been trying to send for a while: His campaign isn’t about party doctrine. It’s about changing the system to improve the lives of Americans. But in his convention address, Donald did very little to challenge Republican taboos. He echoed Reagan and Nixon, and stoked a conservative indignation that coursed through the whole week in Cleveland. He also doubled down on some of his most controversial policies. An effective ban on immigration from Muslim countries? Check. Threatening to renege on NATO and trade deals? Check. Building a border wall? Check.

Not so for Ivanka, who has taken flak in recent months for standing up for her father, a candidate with a history of making misogynistic statements and whose campaign has been accused of failing to condemn the anti-Semitism of some of its supporters.

Beyond explicitly turning to millennial voters, who are largely liberal, she appealed to women by taking up an issue usually associated with Hillary Clinton. Her most detailed proposal was about the rights of women and mothers in the workplace. It’s an issue that she has championed outside the campaign, on her lifestyle website, on her social media pages and in a forthcoming book. Ivanka, who underwent an Orthodox conversion to Judaism prior to marrying her husband, Jared Kushner, is herself a working mother of three young children. And last night, she promised that her cause was also her father’s — that if elected he would be an ally in the fight for equal pay, affordable childcare and other policies that would ease the burden on working mothers.

“Policies that allow women with children to thrive should not be novelties; they should be the norm,” she said. “Politicians talk about wage equality, but my father has made it a practice at his company throughout his entire career.”

Ivanka also invoked the family business to reach out to minorities who may be turned off by Trump’s rhetoric on immigration and crime. Her dad believes in merit, she said. Full stop. No matter who you are, Ivanka said, you can succeed under Donald Trump.

“There have always been men of all backgrounds and ethnicities on my father’s job sites, and long before it was commonplace, you also saw women,” she said. “My father values talent. He recognizes real knowledge and skill when he finds it. He is colorblind and gender-neutral.”

Ivanka has been a steady presence throughout her father’s campaign. She introduced him when he announced his candidacy, stood by his side as he won primary after presidential primary and, before the tens of thousands who filled the Quicken Loans arena and the millions more watching around the world, gave the preamble to his speech accepting the Republican nomination for the presidency.

She was also floated, by her adoring father during a presidential debate, as being worthy of gracing the $10 bill — and a few weeks back, there was even casual talk that Ivanka would be the perfect running mate for the Donald: a young, smart, uplifting woman who could soften his hard edges.

That, of course, didn’t happen. But judging by the glowing reception she received last night, she may end up playing as important a role on the campaign trail as Mike Pence, the running mate her father ultimately selected. While Pence, a conservative Christian, is working to shore up the GOP’s base, Ivanka is poised to help expand it.