Israel’s mixed Jewish-Arab cities are on fire. Here’s how put out the flames. 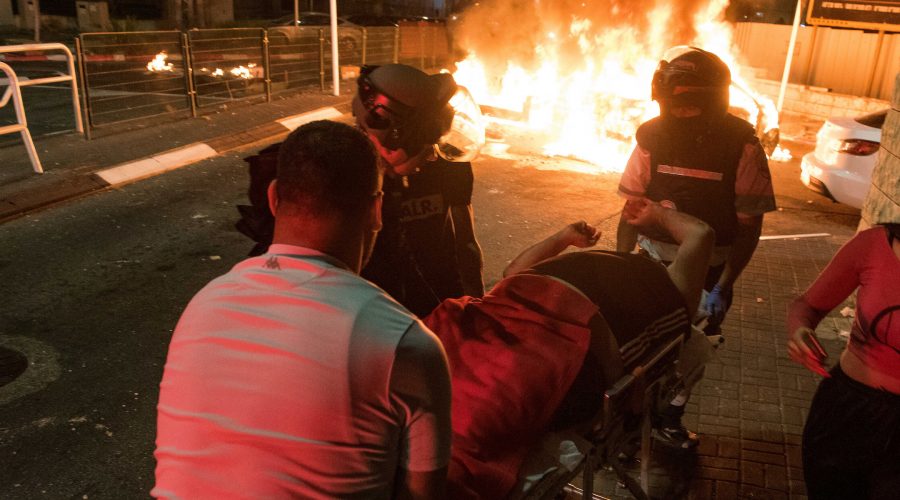 (JTA) — The horrific violence that has erupted over the past few days between Israel’s Jewish and Arab citizens came as a surprise to many. After all, haven’t we heard recently that the elected representatives of Arab citizens of Israel in the Knesset are the new kingmakers? And that in return for their support, the next government was to have made  a serious effort to close the glaring socioeconomic gaps and address the significant challenges facing the Arab minority?

Unfortunately for those of us who live in mixed communities where Arab and Jewish citizens of Israel live side by side, and who closely follow the latest data, the horrific violence perpetrated by a small minority in Lod, Acre and even Jaffa was almost inevitable. A perfect storm has long been brewing.

Unemployed youth with little prospects on the horizon add to rising crime in Arab communities. The government and municipalities lavish money on projects and policies that benefit Jewish residents, often at the expense of long-time Arab residents. All this created a tinderbox ready to be lit on fire at the end of the Ramadan period.

Lax policing plays a significant role in all this, as well. An unwillingness to commit resources and personnel has created rates of violent crime in these cities that are among the highest in Israel. In 2020, 21 Arabs were murdered in mixed cities — 20% of all Arabs murdered in Israel in 2020 — double their share of the population.

All this came to a head in the last 10 days.

There can be no excuse for violence, but to better understand the situation in much of Israel today, it is helpful to take a closer look at these mixed cities. There is a prevalent myth that these communities are beacons of hope. Travel spreads in leading international publications feature boutique hotels in Acre and Jaffa and that project an overly positive image of a Middle Eastern success story.

In reality, Arab residents of mixed cities live almost completely separate lives from the Jewish majority. Neighborhoods, and even city blocks, are clearly delineated between Jewish and Arab residents, and it goes without saying that almost all schools are completely separate. I myself grew up in Ramla, a mixed city with Arab and Jewish residents. I had no interaction with Jewish residents and did not speak Hebrew until I turned 18 and got my first job.

There are legitimate cultural and national reasons for Israel’s Jewish and Arab communities to seek to protect their own individual identities, but as is often the case, completely separate lives can breed inequality. On the average, the government invests the equivalent of less than $8,000 in an Arab high school student in the mixed cities, while committing over $13,000 per Jewish student in these same communities. Approximately 30% of Arab citizens between the ages of 18-24 are neither employed nor studying. Among their Jewish peers, only 13% are not working or studying. This means, that around 250,000 young Arabs are either at home or roaming the streets with little to occupy their time. The problem is especially acute in some of the cities in the headlines recently: Only 33% of Arabs in Lod and only 43% of those in Acre are employed.

To make matters worse, less than 20% of Arabs in mixed cities have academic degrees, greatly limiting their ability to improve their lot and gain meaningful employment.

To complicate matters even more, in many of these cities there are two kinds of “imported populations”: The first are families of “collaborators,” Palestinians originally from the West Bank, who have collaborated with Israeli intelligence, have been resettled within Israel proper and are shunned by the Arab minority living in Israel. The second are  “Garinim Toranim” — Jewish, ideologically based groups who seek to strengthen the local Jewish community, with little focus on truly integrating into cities such as Lod, where we saw some of the worst violence.

Against the backdrop of these dismal statistics came the events of May 2021: the dispute around the pending expulsions of Palestinians in Jerusalem’s Sheikh Jarrah neighborhoods; the police action at the Aqsa Mosque and Temple Mount, and then the fierce Israeli retaliation in Gaza for the missiles fired by Hamas in Gaza. All resonated with the unemployed Arab youth in the mixed cities, where in a recent survey, 50% of the residents reported that they believe that their municipalities do not offer the same level of services to Jewish and Arab residents.

So, where do we go from here? The answer lies in the underlying conditions that contributed to the violence in the first place. While a resolution of the Israeli-Palestinian conflict and the religious and nationalistic tensions it incites is probably years away, Israel’s government can make practical decisions that can narrow the gaps within our society and provide equal opportunities for all.

Government Resolution 922, a five-year, $4.6 billion passed in 2015 and extended last year for an additional year, was a giant step forward towards the social and economic advancement of Israel’s Arabs. It will hopefully narrow the gaps between Arab and Jewish society in education, housing, employment and many other areas. Nevertheless, challenges unique to mixed cities were excluded from the resolution. What is needed now is a new plan that will focus on these cities, and allocate funding aimed at narrowing the gaps within these municipalities in addition to supporting Arab citizens throughout the country.

The violence within Israel is devastating for those experiencing it firsthand and disheartening for all of us who hope for the day in which all citizens of Israel have equal rights and equal opportunities. The immediate consequence must be fair but harsh policing against anyone who uses violence, coupled with a call by religious and communal leaders to instill calm. Then, we must all get back to work to develop policies that will build a better and more just society, and ensure that our leaders will implement them towards a more hopeful future for Jews and Arabs alike.

The post Israel’s mixed Jewish-Arab cities are on fire. Here’s how put out the flames. appeared first on Jewish Telegraphic Agency.