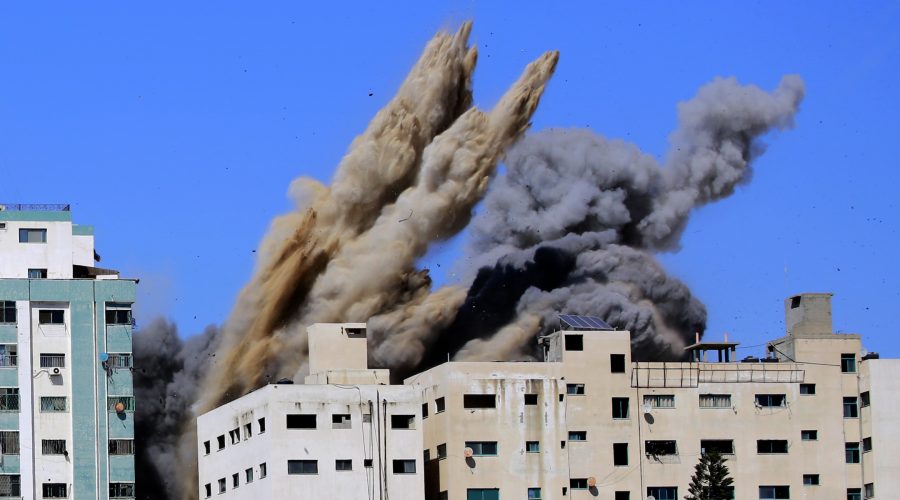 (JTA) — Israeli airstrikes killed at least 42 people in the Gaza Strip on Sunday, making it the deadliest day yet in the week of fighting between Israel and the Palestinian militant group Hamas.

Despite the shelling, Hamas continued to fire rockets at Israel throughout Sunday, even as overwhelmed medics pulled people out from the rubble of destroyed buildings throughout Gaza, according to reports.

International outcry — including from several leading pro-Israel American lawmakers — over Israel’s military response continues to grow. But the sides do not appear to be close to reaching a ceasefire.

Here’s the latest from this weekend:

-Gaza’s health ministry claims that 12 women and eight children were among those killed in the attacks Sunday. No Israelis were reported dead or injured. One attack on Saturday killed at least 10 Palestinians from one extended family in a refugee camp. In total, 188 people in Gaza and 10 in Israel have been killed in the week-long conflict.

-Israel’s military released video of what it claims to be a bombing of the senior-most Hamas leader’s home in Khan Younis, a city in southern Gaza.

-Israel on Saturday also bombed a 12-story building in Gaza City known as a center for journalists covering the region, including some working for the Associated Press and Al-Jazeera. The Israel Defense Forces claims that Hamas operated out of the tower, and there were no deaths in the attack. But the AP said it was not aware of any Hamas activity in the building, according to The New York Times. President Biden’s Press Secretary Jen Psaki tweeted Saturday: “We have communicated directly to the Israelis that ensuring the safety and security of journalists and independent media is a paramount responsibility.”

-A number of leading pro-Israel Democrats — including Sen. Robert Menendez of New Jersey, the chair of the Senate Foreign Relations Committee and a favorite of the AIPAC Israel lobby — made rare public statements criticizing Israel, urging the country to be more cautious with regards to civilians in its attacks. “I also believe there must be a full accounting of actions that have led to civilian deaths and destruction of media outlets,” Menendez said in a statement Saturday.

-A dozen Jewish House reps, including Jerry Nadler of New York, Jamie Raskin of Maryland and David Cicilline of Rhode Island, also signed a letter on Friday expressing deep concern about “Israeli police violence” and urged Israel to abandon its plan to evict Palestinians from the Sheikh Jarrah neighborhood of Jerusalem.

-The U.N. Security Council is scheduled to meet to discuss the conflict for the first time on Sunday. China’s Foreign Minister Wang Yi bashed the U.S. on Saturday in a call with his Pakistani counterpart regarding the council’s inaction so far.

“Regrettably, the council has so far failed to reach an agreement, with the United States standing on the opposite side of international justice,” he was quoted as saying.