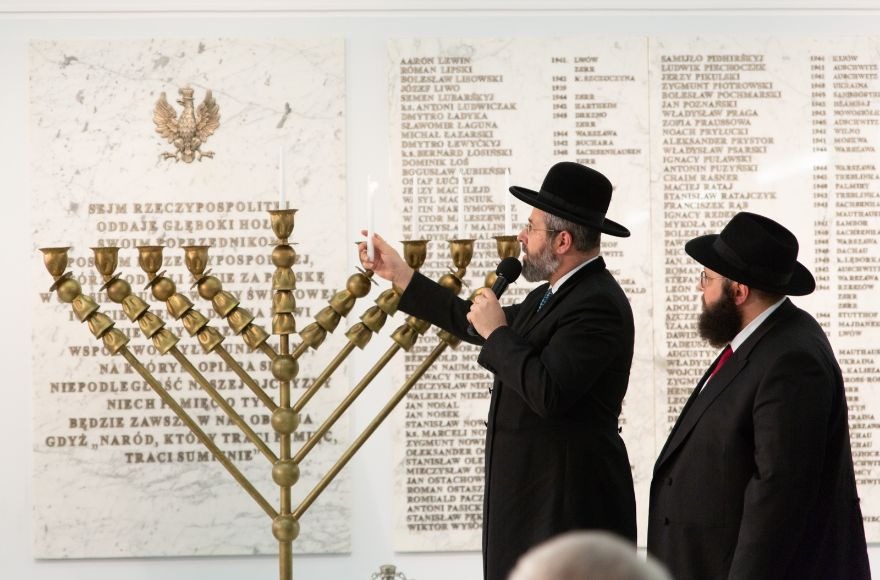 (JTA) – Rabbi David Lau, Israel’s chief Ashkenazi rabbi and the son of a Holocaust survivor, lit Hanukkah candles at the Polish parliament in what he called the “closing of a circle.”

Lau, whose father and predecessor, Yisrael Meir Lau, was born in Poland, lit the candles Wednesday during a ceremony at the Sejm, the parliament’s lower house.

“For me, this represents a closing of circles,” the younger Lau said. “Most of my family perished on this country’s soil, but today I am illuminating the darkness with these Hanukkah candles and thus perpetuating our glowing Jewish heritage.”

Lau said the event was the first time that a chief rabbi of Israel has lit Hanukkah candles at a public event in Poland.

In attendance at the ceremony Wednesday in Warsaw were Deputy Minister of Culture Jaroslaw Sellin; Chairman of the Law and Justice Party Jarosław Kaczyński and Sejm Marshal Marek Kuchciński.

Rabbi Yisrael Meir Lau, the current chief rabbi’s father, was born in Piotrków Trybunalski, Poland, in 1937. He and another brother were sent to the Buchenwald concentration camp. A Russian soldier there took care of Lau, then just a boy, and saved his life.

“Specifically in a country such as Poland, there is great significance to lighting Hanukkah candles here in Parliament,” said Rabbi Shalom Stambler, an emissary of the Chabad-Lubavitch movement to Poland. When “all of Europe is afflicted with anti-Semitism,” he said, “there is great significance when senior government officials and rabbis perform this ceremony together and garner nationwide approval.”

Throughout the eight-day festival, several candle lighting ceremonies will be held in Warsaw.

POLIN, the Museum of the History of Polish Jews in Warsaw, will host an event with 500 community members, featuring the Israeli performer of Jewish and cantorial songs, Dudu Fisher.