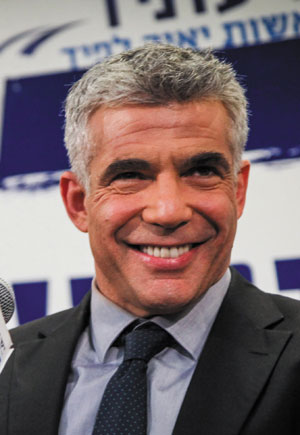 Israeli Finance Minister Yair Lapid has presented the Israeli government with his ministry’s final budget proposal for 2013-2014, outlining aggressive cuts and a series of new taxes meant to help cover some of the Israel’s 39 billion shekel ($11 billion) deficit.

Some 4 billion shekels ($1 billion) will be cut from defense spending, as well as 2 billion shekels ($560 million) from education and transportation, over the two years. Additional cuts, yet to be determined, will be made from the Israeli government welfare and health budgets.

As part of Lapid’s deal with Histadrut Labor Federation Chairman Ofer Eini, negotiated to avoid a general strike that could potentially shut the Israeli economy down, a 2 billion shekel cut and wage freeze planned for the public sector will be revised. Finance Ministry and Histadrut officials are still negotiating the final agreement, which Lapid and Eini are expected to sign next week.

One of the biggest bones of contention in the proposed Israeli government budget is the Finance Ministry’s plan for a 3 billion ($841 million) cut in child allowances and day care subsidies. The bill proposes cutting child benefits from 175 shekels ($50) to 140 shekels ($39) per month per child.

Knesset members from all factions are expected to oppose the child allowance cut vigorously. But the Finance Ministry has already prepared two compromises to help win it a favorable vote: If the proposed child allowance cut meets what ministry sources define as “mere opposition,” the benefit will be cut to 150 shekels ($42) instead of 140 shekels. And if the cut meets fierce opposition that might jeopardize the entire budget bill, the child benefit will be set at 160 shekels ($45) per month.

“Every minister has already declared their ministry a disaster zone, which is fine,” Lapid said on Monday, adding he was ready to “deal with whatever pressure is exerted on me.”

The proposed Israel government budget also calls for an unprecedented series of new taxes, which the Finance Ministry believes will yield the state some 20 billion shekels ($562 million) in revenue over the next 18 months. Value added tax (VAT) will increase from 17 to 18 percent as early as June, which will automatically drive up public transportation prices in Israel, as well as the prices of most goods and services.

Despite raging opposition, the Finance Ministry also plans to cancel various value added tax exemptions afforded to the Israeli Tourism Industry, although it has yet to announce its final decision about revoking the VAT exemptions given to the southern resort city of Eilat, whose economy is almost completely dependent on tourism.

The ministry also plans a 0.5 percent rise in the health tax for high-income earners. Other taxes include revoking the health tax exemption afforded to housewives; imposing a 20 percent tax on alcoholic beverages and higher taxes on cigarettes; introducing a new, 25 percent land betterment tax for individuals who own more than one apartment; and imposing a 35 percent tax on pension plans for those earning over 15,000 shekels ($4,200) a month.

Lapid decided to increase corporate income tax by 1 percent to 26 percent, and to impose a uniform 15 percent tax bracket for all major corporations. But companies that operate outside central Israel will be excluded and will remain in their current 10 percent tax bracket.

An Israel Tax Authority report released on Monday said that the scaled corporate tax employed by the Finance Ministry in previous years, in an effort to encourage capital investment in the private sector, resulted in a staggering 70 percent tax break for the four largest corporations in Israel between 2003 and 2010.

The four companies, which were not named in the report, paid only 3.3 percent in taxes, effectively receiving a 5.6-billion shekel ($1.56 billion) tax break in 2010 alone. According to the report, the Israeli government will lose nearly 10 billion shekels ($2.78 billion) in 2013 in a similar scheme.

Speaking at a financial conference Monday, Lapid said, “The middle class is not upset because it has to pay taxes to support those who are less privileged. They are upset because they feel, and justifiably so, that for many years their hard-earned money has been snubbed; that instead of helping the weak, those taxes funded certain sectors, irresponsible tycoons and unnecessary government ministries. It’s our job to change that and create a just system.” Lapid also criticized the “tycoons, big unions and certain sectors that are willing to do anything it takes not to be taken for fools… but have no problem making a fool of the middle class.”

On Tuesday, Lapid stressed that his proposed austerity measures were short-term, saying, “This is what leadership and taking responsibility are all about. We knew this was going to be hard and we know people are angry, but we can’t be blindsided by anger when the other option spells the economy’s collapse.”