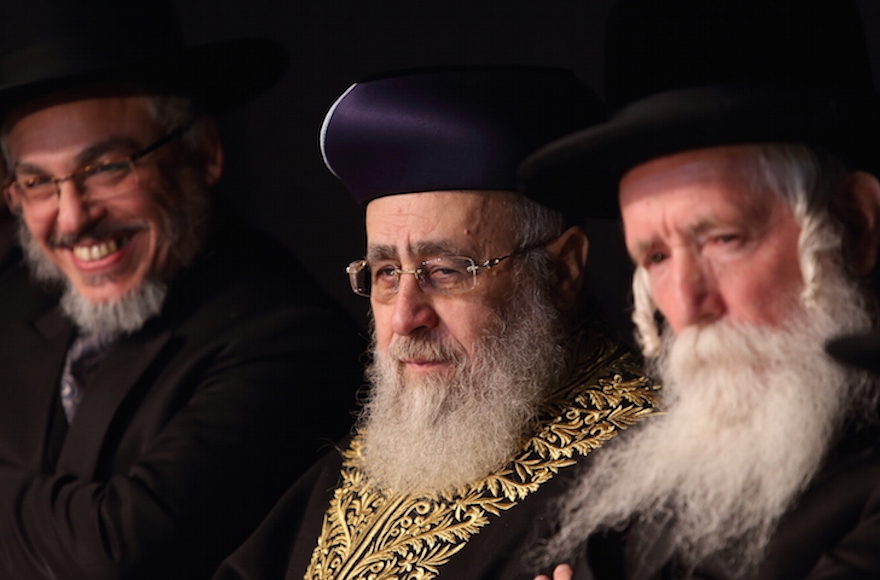 TEL AVIV (JTA) — Israeli Chief Rabbi Yitzhak Yosef walked back his  statement that non-Jews should not live in Israel, calling the comment “theoretical.”

The letter also walked back Yosef’s statement made earlier this month that it is obligatory to kill terrorists.

Yosef made the statement about non-Jews on March 26 during his weekly Saturday night lecture. He said non-Jews could live in Israel only if they observe the seven Noahide Laws, which include prohibitions against idolatry, blaspheming God, murder, forbidden sexual relations, stealing and eating the limb off a live animal, and which proscribe the establishment of a legal system. Non-Jews, Yosef said, are in Israel only to serve Jews.

“According to Jewish law, gentiles should not live in the Land of Israel,” Yosef said. “If a gentile does not agree to take on the seven Noahide Laws, we should send him to Saudi Arabia. When the true and complete redemption arrives, that is what we will do.”

Following a public backlash, Yosef on Tuesday clarified his comments in a statement, where he wrote that his lecture referred to a future messianic era, not the present day. He wrote that he has “always adopted a peaceful and embracing path.”

“These laws are theoretical, refer to fulfilling the seven Noahide Laws in the days of the messiah, and have no connection to the present day,” the statement read. “It’s clear that there’s no law in our time, God forbid, to expel non-Jews from Israel.”

Earlier this month Yosef, the son of the late chief rabbi of Israel Ovadia Yosef, asserted during his weekly lecture that it is a mitzvah to kill a terrorist. He also asserted in the same March 12 lecture that the threat of being killed by an attacker’s would-be victim will deter such attacks.

Yosef’s Tuesday statement claimed that “contrary to reports, he was one of the few who declared that neutralized terrorists shouldn’t be killed, and should be turned over to the authorities.”