WASHINGTON (JTA) — During the last congressional elections, in 2018, the overarching story was the rise and eventual success of “the resistance,” the Democrats spurred to run for Congress simply because they loathed everything that President Donald Trump stood for. They included some inspired by the Women’s March and anti-bigotry campaigners appalled by Trump’s equivocations over condemning white supremacists.

Uncovering the Jewish subplot to that story was not difficult. And in some cases, a single candidate embodied it. Take, for example, Chrissy Houlahan of Pennsylvania, who cited joining the Women’s March with her daughter —  as well as her father’s experiences as a Holocaust survivor — in explaining why she ran and eventually won. (Houlahan herself does not identify as Jewish.)

Now the plot appears to be whether the resistance makes it through the next election. And again, there’s a Jewish subplot: How does the Trump factor play into a Jewish candidate’s chances?

We’ll be taking a look at a number of races countrywide through the Trump-resistance-Jewish vectors. Let’s start with three races in New York’s June 23 primary, where there’s an additional wrinkle: With the rise of the Democratic resistance, does a pro-Israel record hurt or help Democrats?

Will these three New York veterans be replaced by AOC wannabes?

One of the biggest stories of 2018 was Alexandria Ocasio-Cortez’s success in ousting a senior New York Democrat, Joseph Crowley, in her Bronx area’s 14th District. Her victory in the primary was a stunner. A narrative emerged that Crowley’s responsibilities as a House leader made him inattentive to his district, and his centrism was a negative in a deeply blue district where a candidate did not need to court Republicans.

The narrative was powerful enough that it has fueled challenges this cycle from the left to three other New York City-area Democrats, all Jewish and over 70. All three are in nationally visible positions: Eliot Engel is the chairman of Foreign Affairs Committee; Nita Lowey chairs the Appropriations Committee; and Jerry Nadler heads the Judiciary Committee.

Surprises happen, as we saw with Ocasio-Cortez, but lightning never strikes twice in precisely the same way. Crowley’s district is comprised mostly of minority voters and is substantially working class. In retrospect, it seemed anomalous to be represented by an older white male close to the power elites. Of the other three districts, only Engel’s is somewhat comparable (and doesn’t have nearly as many minority voters as Ocasio-Cortez’s) and all are wealthier.

Lowey, 82, announced late last year that she was retiring from representing her 17th District covering mostly suburbs in Rockland County and parts of Westchester. That defused the potency of her would-be AOC, Mondaire Jones, 32, and an alumnus of the Obama administration Justice Department. Jones announced before Lowey said she would not run again, but once the longtime incumbent said she was done, she did, there there waswas a rush of other candidates to step in. Most of them are like Lowey, fairly centrist.

Lohud (I have no idea what that stands for), the USA Today-affiliated Long Island news site, says Lowey has enough potential successors to form a baseball team — a good analogy because it’s the American sport where Jews most thrive.

Among the Jewish candidates hoping to take her place:

The challenge to Nadler, 72, from his left in the 10th District, covering parts of Manhattan and Brooklyn, is emblematic of how the AOC-Crowley story is no longer a template. Prior to 2018, Democrats were the minority in the House and seemed impotent; picking off the elders seemed to make sense. Once they gained the majority in ‘18, however, the experience of their House veterans was key in battling Trump, most prominently in his impeachment on charges that he tried to muscle Ukraine into doing partisan dirty work for him.

Nadler, in any case, was always more of a progressive than a centrist. Now he can boast to his very liberal district that he helped to lead what likely will be the second most defining moment of the Trump presidency (the first being Trump’s handling of the coronavirus pandemic).

He has two challengers from his left: Jonathan Herzog, who advised Andrew Yang’s presidential campaign (and, at 25, would be the youngest-ever congressman), and Lindsey Boylan, 36, who helped direct economic development for New York state. Boylan told Teen Vogue that she was inspired by Ocasio-Cortez. Her main beef with Nadler when that article was published in August 2019 — that he wasn’t moving fast enough to impeach Trump — is now moot. Boylan also argued that, like Ocasio-Cortez and others, she would bring a woman’s voice to a town where men have been silencing women for decades.

Nadler this week secured the endorsement of Massachusetts Sen. Elizabeth Warren, a progressive who drew a good deal of support during her presidential candidacy from women. That neutralizes two of the areas that Nadler’s challengers say he is vulnerable, on progressive and gender politics.

Engel in the 16th, covering parts of the Bronx and Westchester County, faces the greatest challenge of the three — from Jamaal Bowman, an education activist and middle school principal. Bowman, 43, has the endorsement of Justice Democrats, the group that helped propel Ocasio-Cortez to her victory, and has the enthusiastic support of The Intercept, an influential online newspaper on the left. Engel also was hit last week with an Atlantic article wondering why he wasn’t campaigning in New York. The answer: No one campaigns in person during the pandemic, and his chairmanship of the Foreign Affairs Committee keeps him in D.C. Nonetheless, Bowman has started to campaign on Engel’s absence.

On the plus side for Engel, 73, he helped lead the prosecution of Trump, although not with the same profile as Nadler. He’s got plenty of middle-of-the-road Jewish constituents who appreciate his long record of pro-Israel legislation and may fear Bowman’s alliance with some of Israel’s harshest critics in Congress. Plus, Engel has made some late-breaking resistance news: He is taking the lead in seeking to uncover allegations of corruption against Mike Pompeo that surfaced after the secretary of state fired his department’s inspector general last week..

Dethroning King: The Republican Jewish Coalition runs through the playbook of how to take down an undesirable member of one’s own party — in this case Steve King of Iowa, who has dallied in the past with white nationalists.

Biden and Israel: The former vice president’s Jewish campaign is gearing up, with at least three virtual conferences this week focusing only on his Jewish campaign, one featuring Biden himself. The presumptive Democratic presidential nominee made news when he said explicitly that he would reverse some of Trump’s Israel policies and advised Israel not to annex territory in the West Bank. His adviser, Tony Blinken, offered a pronounced contrast with Biden’s former boss, Barack Obama, and said Biden would keep disputes with Israel behind closed doors.

Hell no, not the MFO: Top congressional Republicans and Democrats warn Defense Secretary Mark Esper against removing U.S. troops from the Sinai, where they have helped maintain peace between Israel and Egypt for nearly four decades.

Don’t Juneau not to Nazi? An Alaska lawmaker is the latest Republican to liken quarantine regulations to the Nazis and then apologize. Aren’t Alaskans supposed to be into wide open spaces?

At The Bulwark, the home of conservatives who revile Trump, Mona Charen sees the erosion of conservative values in Trump’s retweeting Michelle Malkin, a one-time establishment conservative who now associates with Holocaust deniers.

Johnny Kunza, the news director at the Forward, was there at the launch of the New Jersey-St. Louis bagel wars. And it was good. 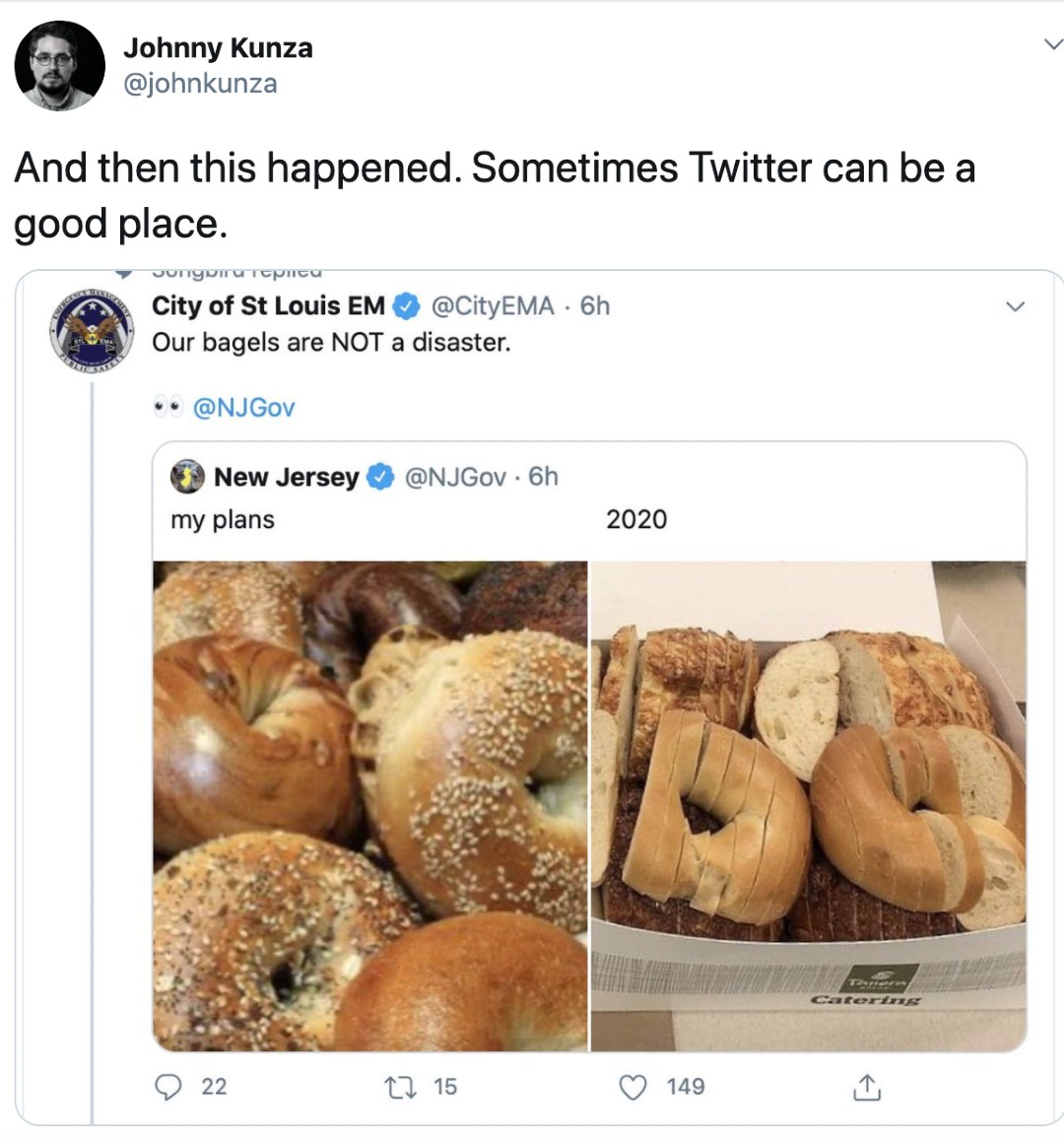