In New Rochelle, where NY’s outbreak began, my parents’ community yearns for normal

(JTA) — It was during my own quarantine in Israel following an ill-timed trip to Italy in late February that I learned that my parents were stuck in the epicenter of the new coronavirus outbreak in the United States.

A man from their synagogue in the New York City suburb of New Rochelle, Lawrence Garbuz, had fallen ill with the coronavirus, becoming “patient zero” — the first person to test positive for COVID-19 in New York.

Within days in early March, several members of the shul were sick, including the rabbi and his wife; state health authorities shut down the synagogue; National Guard troops were dispatched to the city; and half the shul was placed under quarantine, including my parents.

New Rochelle, where I grew up, was the last place I’d have imagined sparking global headlines. A leafy suburb about 30 minutes from Manhattan, it is home to a thriving Modern Orthodox community with an idyllic feel: People live comfortably in expansive homes; they work in high-powered fields like finance, law and medicine; and on Shabbat they enjoy hours-long meals at friends’ homes, lounging by their backyard swimming pools or meeting for walks around a small area lake.

The Orthodox synagogue, the Young Israel of New Rochelle, which has about 400 families, is the focal point of the Modern Orthodox community: It has four daily morning minyans, a massive social hall where Shabbat kiddushes not infrequently resemble wedding buffets, a spa-like mikvah and its own eruv.

For the past three months, the community has been transformed. 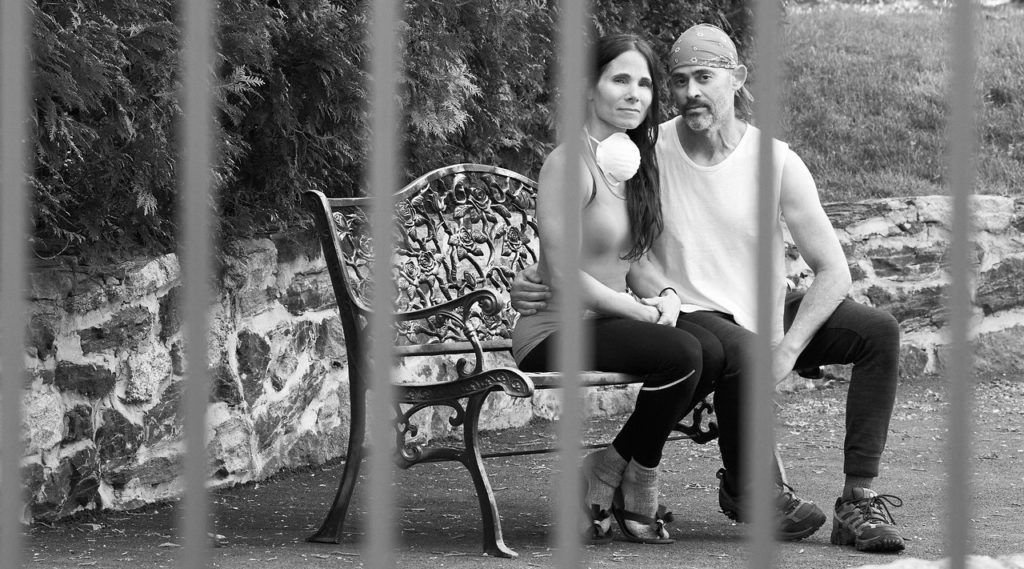 Monica and Michael Brooks are among the 400 or so families from the Young Israel of New Rochelle who have been living in virtual lockdown for nearly three months. (Stan Weiss)

Several members have been hospitalized with COVID-19, and two have died (including one who lived in Manhattan but remained a community member). People from the congregation have lost parents, siblings and close friends to the virus. In some cases, children have been unable to make it to their own parents’ funerals due to their own illness or geographic distance. Funerals take place largely without mourners, and shiva is conducted via Zoom.

Residents spent nearly three months in virtual lockdown. Schools were shuttered and summer camp was canceled. Young people from New Rochelle who were away at college or living as singles in trendy neighborhoods of Manhattan or Brooklyn returned home, fleeing the hazards of the densely populated city for the relative safety of their childhood bedrooms.

The Young Israel, which was the first synagogue in America shuttered by coronavirus, remains closed. For weeks, a massive Israeli flag was draped over its entrance. In recent days it has been replaced by an American flag. 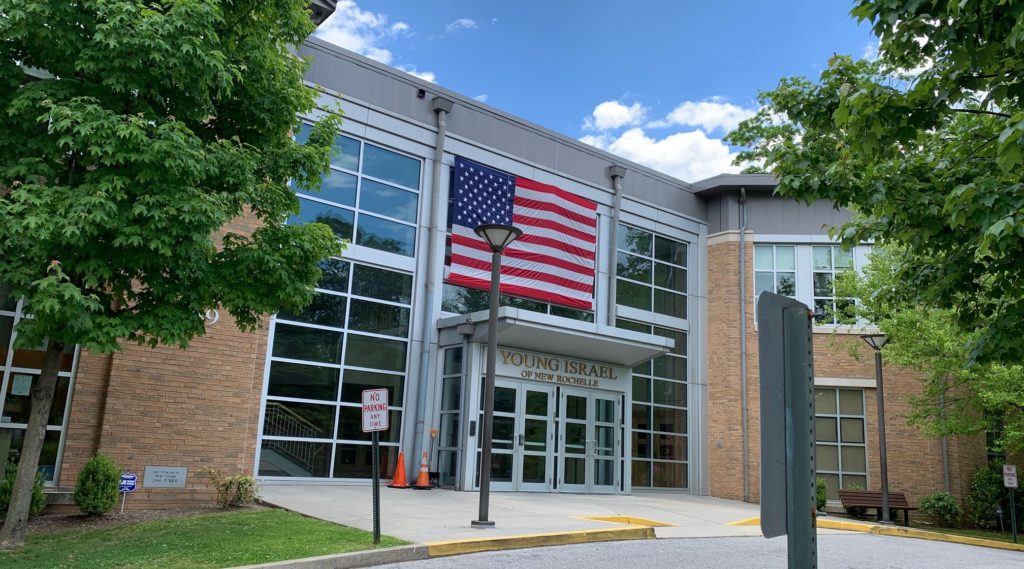 The Young Israel of New Rochelle, in a suburb of New York City, was the first synagogue in the United States to close due to the coronavirus pandemic. As of June 1, 2020, it remained closed. (Samuel Heilman)

Even after New York Gov. Andrew Cuomo gave permission for religious services of up to 10 people to resume, synagogue leaders decided to follow the advice of rabbis from the Orthodox Union and Rabbinical Council of America and wait at least two more weeks, until after Shavuot, before allowing even outdoor prayer services.

This is a community that is deeply traumatized. Nevertheless, the community did not go dormant amid the pandemic. On the contrary. 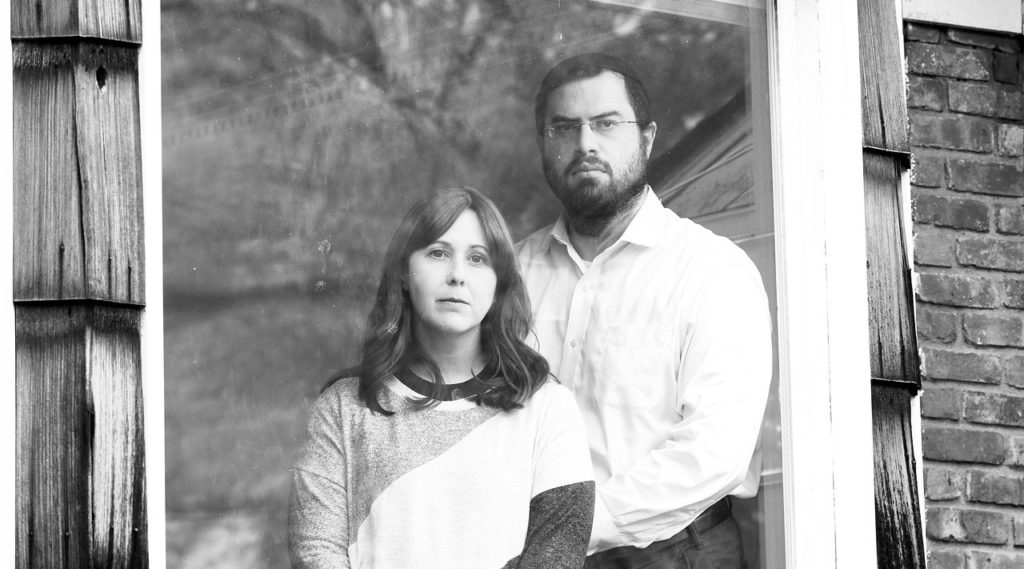 Rabbi Chaim Axelrod and his wife, Yael Wagner, have been praying at their home in New Rochelle, New York, since the outbreak of the pandemic in the state. (Stan Weiss)

Community members who have recovered from COVID-19 donate blood plasma so their antibodies can be used in experimental coronavirus treatments. Every Shabbat, different doctors from the synagogue take shifts serving as on-call physicians for anyone who might need medical help or consultation. The community is mobilizing efforts to help those who may be out of a job or facing financial distress. One member of the community has been going house to house to photograph families in isolation, posting them on Facebook with the hashtag YINRStrong.

A pair of psychologists leads a Zoom support group for grandparents struggling with not being able to see and hug their grandchildren. Community members participate in drive-by parades for bar mitzvah kids and graduating seniors whose celebrations have been canceled, their friends poking their heads out of sunroofs yelling “Mazel tov!” as they cruise by.

There are Torah classes via Zoom, WhatsApp groups for members who compete virtually in exercise groups and a subscription service for food deliveries from nearby farms. On Purim, Chabad emissaries from Brooklyn went yard to yard reading the megillah to quarantined families from a safe distance. Practically every night, families from the community try to support a different kosher restaurant by pooling together to order meals for delivery. 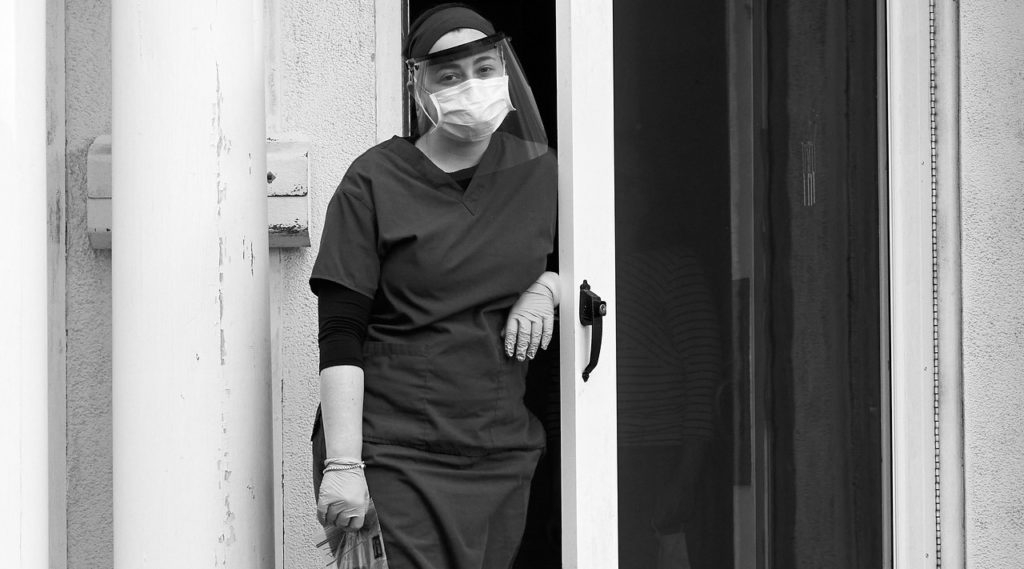 Numerous healthcare workers are among the members of the Young Israel of New Rochelle. (Stan Weiss)

Instead of canceling the shul’s annual gala dinner, the shul delivered dinner in a box to each member’s home and held the event online. Some of the virtual guests still wore suits and ties.

The shul remains closed, but the community is open for business.

Three months on, the virus’ path of destruction has claimed the lives of over 100,000 Americans, including nearly 24,000 in New York. Westchester County, where New Rochelle is located, counted 1,371 coronavirus deaths through the end of May — more than any other county in the state outside the city and Long Island.

Given these circumstances, it turns out that the early lockdown in New Rochelle was a blessing in disguise. While most Americans were still going to work and school, eating in restaurants, and riding packed buses and trains, the invisible enemy was spreading.

But in New Rochelle, where the early outbreak had shuttered the shul, most local businesses and all three of the nearby Modern Orthodox day schools that serve the community, the social distancing that’s key to slowing viral transmission was already in place. 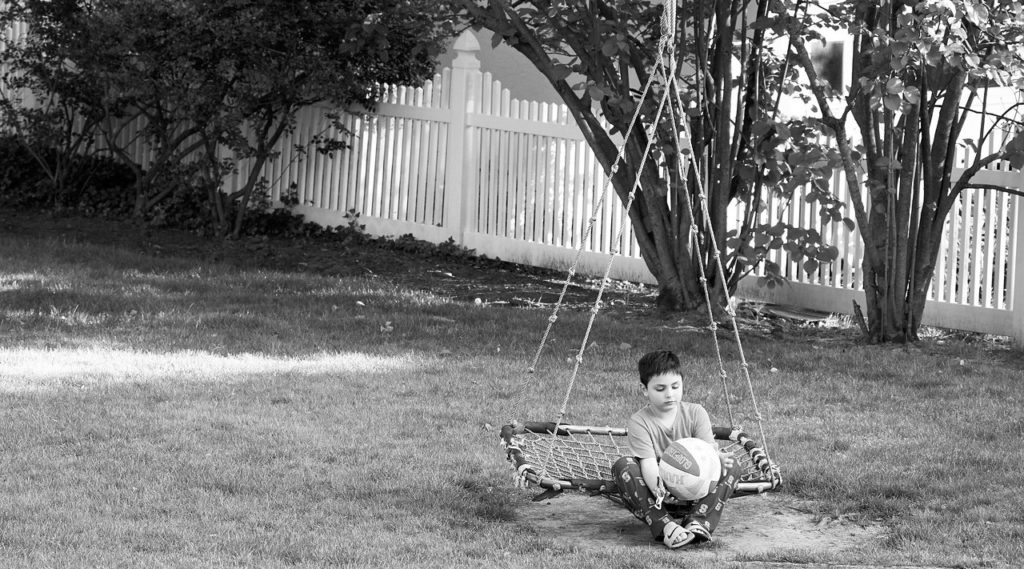 The three nearby Jewish day schools to which Orthodox families in New Rochelle send their children were among the first schools in the United States to close their doors, after some students were found to be infected in early March 2020. Since then, the children have been home. (Stan Weiss)

Garbuz, the patient zero, after spending several weeks in the hospital — including time in a coma and on a respirator — has returned home and is recovering. Community members have begun making preparations to hold outdoor minyans in their backyards. Normal life still feels very far away, but there’s some cause for hope.

My parents, who are in a high-risk group due to their age, are still stuck at home. My siblings and I have cautioned them about venturing out to go shopping, or anywhere indoors. They take lots of walks with friends, wearing masks and maintaining distance. My father, a sociologist who just taught his last semester after more than four decades at the university, had his recent retirement party online.

The most difficult element is being cut off from each other. Until I left for Israel last summer with my wife and children, we lived in a nearby suburb just a 10-minute drive away. Whenever my parents wanted to hug a grandchild, they’d just pop over. 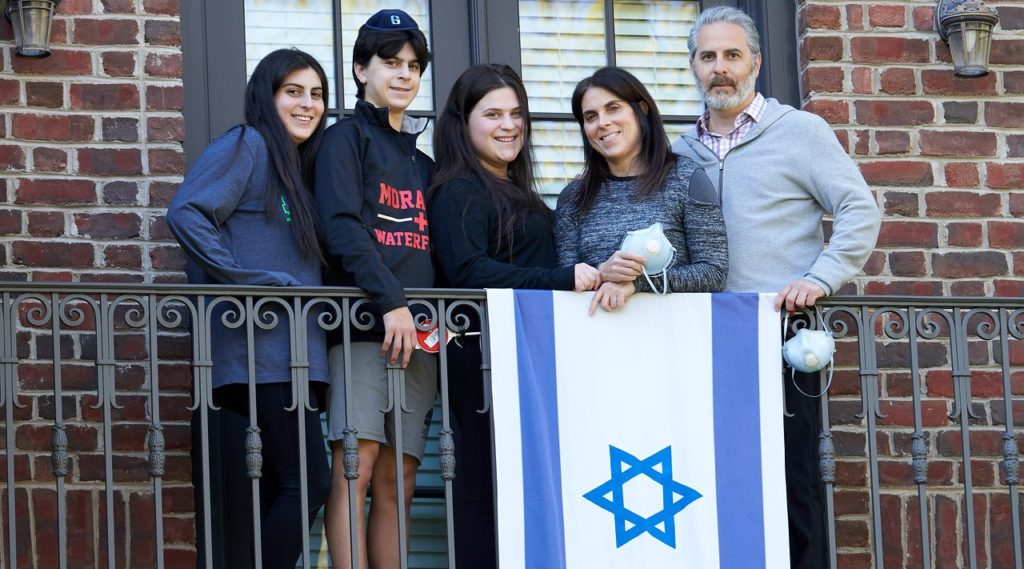 Ilan Slasky, right, is among the many members of the Young Israel of New Rochelle who are deeply connected to Israel. (Stan Weiss)

The FaceTime conversations to which we’ve now been relegated are an inadequate substitute. Never before has the Atlantic Ocean felt so vast and impassable. Until corona times, we were separated from them “only” by an 11-hour flight and the cost of a plane ticket.

Now they may as well be on Mars.

My parents were supposed to have been in Israel for two months around Passover, but the virus derailed those plans. Now we don’t know when we’ll see each other again.

In the meantime, we wait, peering at each other through screens, suffering their annoying little hiccups and delays. We wonder how we’ll be able to travel safely to see each other in person, through the perils of the petri dish of an airplane ride. We recently prepared for yet another holiday apart. Searching for a prayer adequate to the circumstance, we wished them a happy Shavuot and whispered: Next year in Jerusalem.