In first, Israeli art on display in Balkan nation of Montenegro 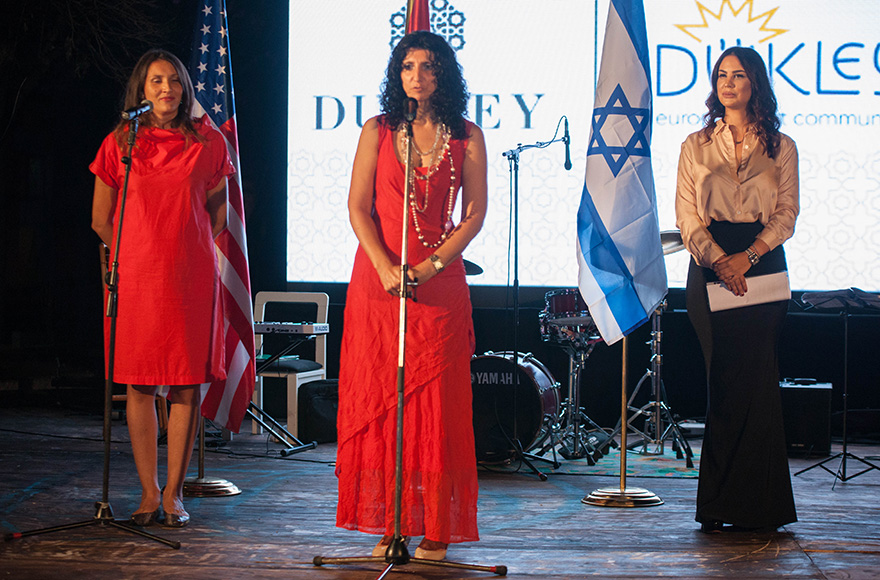 Shirley Siegel, center, at the opening of an exhibition of Israeli art in the city of Kotor in Montenegro on Sept. 15, 2016. (Photo: Dukley European Arts Community)

(JTA) — A Jewish-American businessman and the Israeli foreign ministry co-organized in Montenegro what they said was the first art show by Israelis ever to take place in that Balkan nation.

Neil Emilfarb, CEO of the international investment group Stratex, on Thursday attended with 150 guests the opening in the port city of Kotor of the exhibition by two Israeli women painters: Shirley Siegel, who is Jewish, and her Arab colleague, Shuruq Egbariah.

Emilfarb, who divides his time between Montenegro and Hartford, Connecticut, initiated the project as part of the work of a nongovernmental organization he founded in Montenegro, a nation of some 600,000 citizens that became independent 10 years ago and is sandwiched between Albania and Bosnia-Herzegovina.

“Art is the universal language and it plays a unique role in bringing peoples and cultures together,” Emilfarb said in a statement about his reasons for bringing Israeli art to Montenegro, which has noted “is a short flight from Israel and has never had an incident of anti-Semitism.”

Born in the Uzbekistani capital of Tashkent when it was still part of the Soviet Union, Emilfarb settled in Hartford in 1979. In Montenegro, he is one of the country’s main US investors and has poured millions of dollars into seaside resorts that developed the local tourism industry. He has also lobbied for Montenegrin NATO integration.

Siegel’s work includes painting realistic portraits, some reminiscent of biblical characters, on unpolished rocks. Egbariah is known in Israel for scenic paintings featuring over-saturated colors as well as abstract forms. Emilfarb’s organization brought the two artists for a residency of several weeks in Montenegro, where they are to learn from and teach local artists.

In a statement, Emilfarb’s office called the project a “cultural diplomacy initiative.”