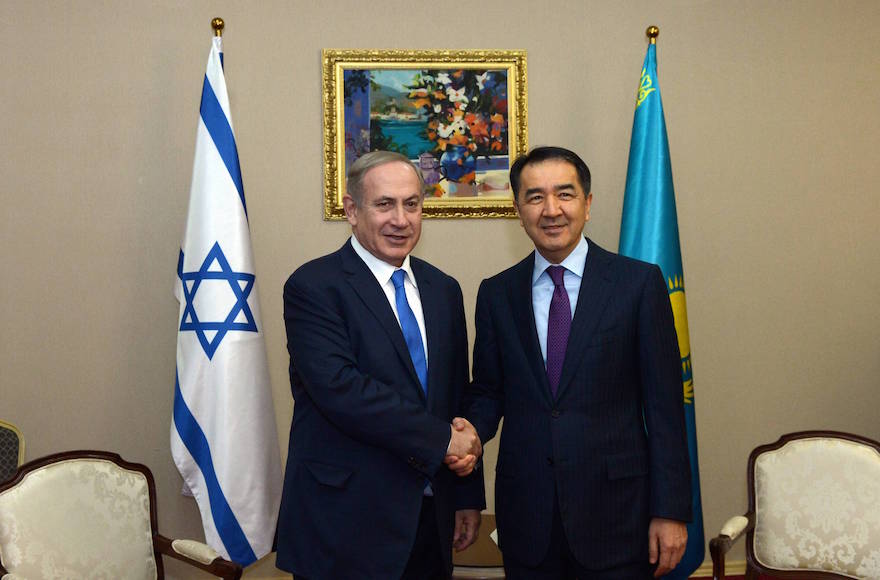 (JTA) — You wouldn’t know it from the front pages of newspapers in Israel, but its prime minister has completed a landmark visit to two of the world’s wealthiest Muslim nations.

Largely eclipsed in the Israeli media by sexual harassment scandals, the Knesset dress code and the impending evacuation of the Amona outpost in the West Bank,  Benjamin Netanyahu’s state visit this week to Azerbaijan and Kazakhstan nonetheless represents a diplomatic coup against Iran. It also underlines Israel’s ability in recent years to punch holes in the former taboo in the Muslim world on openly embracing the Jewish state, experts on the relevant countries said.

“The media apparently missed the historic visit that I’m making to two Muslim nations that simply admire Israel, with whom we are pursuing closer ties,” Netanyahu wrote Wednesday on his Facebook page. Azerbaijan and Kazakhstan, he added in a video message, “are nurturing coexistence and fraternity between Jews and Muslims. This is where we are making the future.”

The visit to Azerbaijan, an oil-rich Shiite nation with a border and tense relations with Israel’s archenemy Iran, is Netanyahu’s second. He visited in 1997, during his first stint as prime minister. His visit to Kazakhstan, the world’s ninth-largest country and Central Asia’s undisputed economic powerhouse, is the first by an Israeli prime minister to that mineral-rich land.

And while Netanyahu’s remarks about the visits may be somewhat hyperbolic, they are essentially on the money, according to Guy Bechor, a former lecturer on Islam and the Middle East at the Interdisciplinary Center Herzliya.

The halving of oil prices since 2014, Bechor said, has “deeply hurt Iran’s economy, which is further burdened by military conflicts in Syria, Lebanon, Yemen and elsewhere.” The same developments have also weakened the Arab Gulf states, which in the past have played key roles in imposing boycotts against Israel among Muslim nations with weaker economies.

“So countries that are drawn to the innovation and technology of the Israeli startup nation have stopped caring about the boycott directive,” he said.

In recent years, Israel has been strengthening ties as well with non-Muslim countries — notably India, Japan, South Korea and China — that had abstained from appearing close to Israel for fear of angering Iran and the Arab League.

And while Arab and Iranian economies languished, Israel’s has experienced a meteoric leap. Its gross domestic product per capita rose to $38,127 in 2015 – higher than Spain, Italy and even France, according to the Economist — after averaging $20,318 from 1960 until last year.

Disregard for Iran’s hostility for Israel was particularly striking in Azerbaijan. During the Netanyahu visit, President Ilham Aliyev for the first time quantified the extent of his country’s military cooperation with Israel.

Azerbaijan has bought nearly $5 billion worth of military equipment from Israel since 1997 – the year of Netanyahu’s first visit there as prime minister. The openness of Aliyev’s remark stunned even longtime observers of his nation’s largely clandestine alliance with Israel. The revelation followed the 2013 disclosure that about one-third of Israel’s gas comes from Azerbaijan.

“This is cooperation on a massive scale,” said Roman Bronfman, a former Israeli lawmaker and well-known commentator about Israel’s relations with former Soviet states. “The volume of trade is enough to persuade the Azeris to defy the Iranians and receive Netanyahu.” 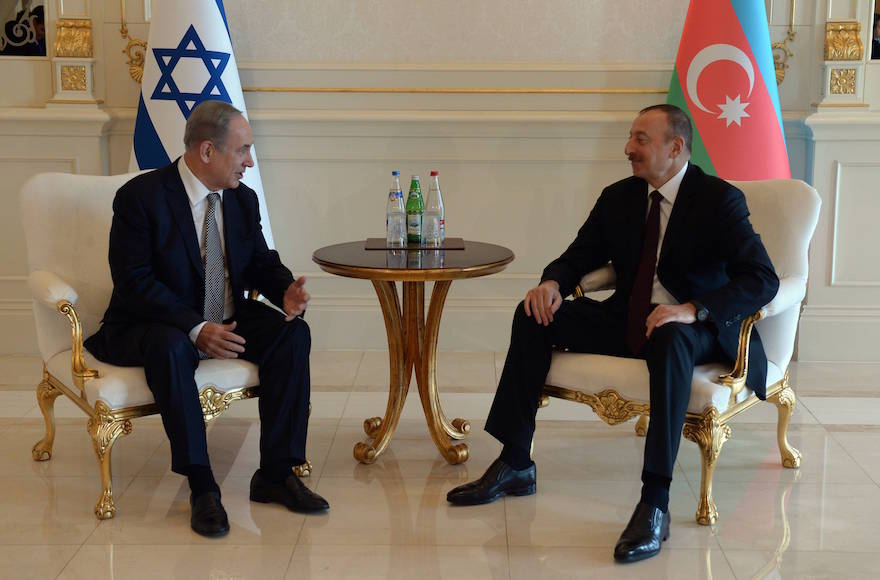 However, Azerbaijan has, under Iranian pressure, declined to open an embassy in Israel, as Israel did in Azerbaijan in 1992.

During his visit, Netanyahu praised the treatment of the country’s Jews — a population of about 16,000, according to the Euro-Asian Jewish Congress — by their government. Azerbaijan’s diplomats, in deflecting criticism over major human rights violations, often insist that they come from a country that “has no anti-Semitism.”

A case in point is Krasnaiya Sloboda, a Jewish town of a few thousand residents in northern Azerbaijan. Hundreds of years of peaceful coexistence between Jews and Muslims have led to so much interfaith cross-fertilization that some Muslim shop owners there today separate dairy and meat for their Jewish clients — who in turn pray in a carpeted synagogue that the men, like Muslim worshippers, enter barefoot.

Perhaps out of consideration for Azerbaijan’s diplomatic position, Netanyahu made no references to Iran during his visit to Baku, the capital, which is located just 160 miles from the Iranian city of Parsabad. Perhaps his mere presence there, amid talk of security cooperation, was powerful enough.

But the Israeli leader addressed the Iranian issue during his visit the following day to Kazakhstan.

In a meeting with Nursultan Nazarbayev, the nation’s authoritarian ruler since 1989, Netanyahu said that “if Iran attacks Israel, it will put itself at risk,” according to The Times of Israel.

Asked by Nazarbayev, who has visited Iran five times, what message he should convey to Iran’s president, Netanyahu replied, “Ask him why Iran continues to threaten us with annihilation. Don’t you understand: We’re not a rabbit. We’re a tiger.”

While the visit to Azerbaijan “seems to have gone well and is likely to deliver positive result, Netanyahu’s reference to Iran in Kazakhstan was a diplomatic blunder, an insult and the reason Netanyahu’s first visit to Kazakhstan will also be his last,” said Bronfman, who used to represent the left-wing Meretz party in the Israeli Knesset.

But Bechor, who is considered right wing, dismissed the claims by Bronfman.

“In fact, Netanyahu also said that Israel will leave Iran alone if Iran leaves Israel alone, so the tone was actually quite tame, but the media played it up,” Bechor said.

But they and other experts agree that part of Israel’s ability to forge strong alliances in the Muslim nations of Central Asia is the region’s strong tradition of religious tolerance, which sets it apart from many other Muslim countries.

The reasons for such tolerance are complex and rooted both in the region’s history under Soviet rule and in the fact that the countries are ruled by dictators who are quick to ruthlessly uproot any sign of religious radicalism that they view as a threat to their countries’ stability – and that of their own authoritarian rule, said Giora Pozailov, a historian at Bar-Ilan University in Israel who specialized in Central Asia’s Jewish communities.

“The Soviet years, the anti-religious oppression of communism, has generated a kinship of religions in Central Asia that exists in few other places,” Pozailov said. And while that trait is “grass roots,” he said,” there is also vigorous top-to-bottom action to prevent Islamists from changing the relatively secular nature of the society of these Muslim nations.”

Chaim Chesler, the founder of Limmud FSU, a Jewish learning organization, said the relative tolerance of Central Asian Muslims is on display each year at his organization’s annual conference in Kazan, the capital city of the predominantly Muslim Russian state of Tatarstan. The event is part of the city’s annual Jewish festival, which includes street celebrations by hundreds of Jews flying Israel flags who convene in the center of the city safely  with little to no security arrangements.

“I regularly put my tefillin on while waiting for the subway in the morning,” Gershon Ilianski, a 16-year-old from Kazan, recently told JTA. “I know they have problems with Muslims in Western Europe, but I never worried anyone would bother me here.”

Chesler says it’s a different kind of Islam than the one practiced in Arab countries, “but one that extremists would happily subvert and destroy if not for the vigilance of moderate rulers.”