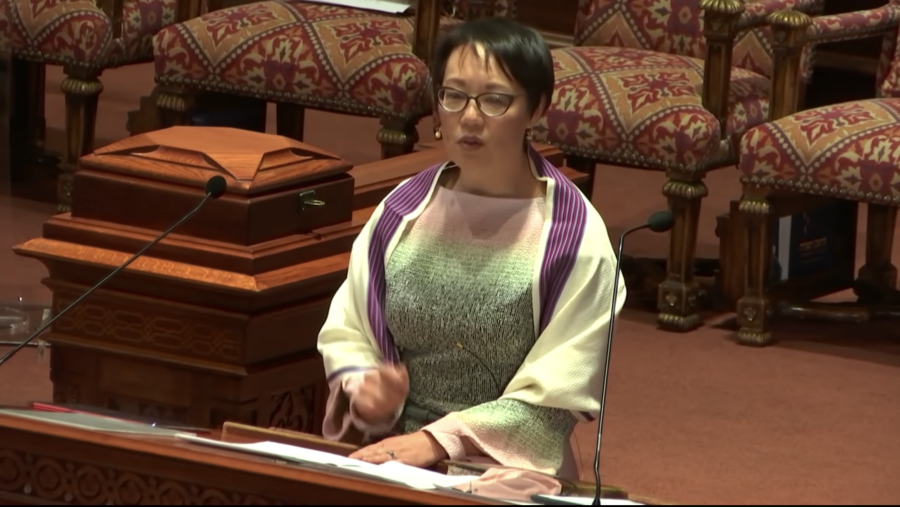 (JTA) — The New York City rabbi who spoke twice to the man who held Jews hostage in their Texas synagogue last week detailed the experience in a sermon Friday night.

Rabbi Angela Buchdahl of Central Synagogue also outlined her anxiety as an American Jew and exhorted her congregants to heed a prayer that the Reform movement has made part of its liturgy on Tisha B’Av, the Jewish holiday that commemorates the destruction of the ancient Temple in Jerusalem and other traumatic events in Jewish history: “Blessed are you, Adonai, who makes us captives of hope.”

Buchdahl had previously acknowledged being contacted by the gunman, whom he reportedly found by searching for influential rabbis. But in her sermon, she recounted the voicemail from Rabbi Charlie Cytron Walker, delivered in what she said was an “unfaltering voice,” that alerted her to her involvement.

“We have an actual gunman who is claiming to have bombs and he wants to talk to you,” Buchdahl quoted. “If you can call me back at this number that would be greatly appreciated. This is not a joke.’”

On her second call with the hostage-taker, she recalled, “He said, ‘I’m running out of patience, and you are running out of time.’ I had already talked to the authorities. I knew there was nothing else I could do but wait and pray.” The prayer she offered, she said, was Hashkiveinu, an evening prayer that envisions God as a protector.

Buchdahl began her sermon by expressing gratitude — to God, to her Cytron-Walker and the other hostages who emerged safely from Congregation Beth Israel in Colleyville last Shabbat; to the security officials and Jewish organizations “who work to keep our communities safe in ways we don’t always see or acknowledge.”

But she said she had not been certain what more to say, in part because she knew that her congregants at Central Synagogue, where she has been senior rabbi since 2014, would “want and need words of comfort and hope from your rabbi” and she did not yet have those words for them.

Instead, she said, her own feelings are “ominous” and entwined with both the dangers that Jews face today and the discourse about antisemitism that was invigorated by last week’s attack.

“If you are a Jew in America and you are not feeling unsettled,” Buchdahl said, “then you are not paying attention.”

I’m unsettled because the world only has the most simplistic understanding of antisemitism. If someone says they hate Jews, or they want to kill Jews, we call it antisemitism. But even educated people, the director of the FBI, do not recognize its far more insidious guise as the trope that Jews are all powerful and control everything. We saw how dangerous that age-old conspiracy theory can be.

I’m unsettled because I saw firsthand that you cannot negotiate with a terrorist. And more and more people in our country and around the globe are captivated by terrifying hateful ideologies, which they value more than their own lives.

I’m unsettled because Rabbi Cytron-Walker’s kindness and humanity were used against him. He opened his doors to this man and gave him a cup of tea. This rabbi welcomes the stranger and this is his reward? We have to protect ourselves. We cannot be naive. But I also know that if we only build fortresses around our sanctuaries, and around our hearts, then he wins.

I’m unsettled because I heard the terrifying voice of radical extremism filtered through the mind of a deranged person who was able to get a gun and then hold for people and an entire Jewish community hostage for 11 hours. I think of the ripple effects that this man set off and the countless resources that we will spend to prevent it from happening again.

She ended her sermon by looking to the week’s Torah portion, Yitro, in which Moses’s non-Jewish father-in-law tells Moses that he is not leading the Israelites to freedom alone.

“This message is truly for all of us. None of us can do this alone,” she said. She later added that  seeing so many congregants attend services — something that Biden administration antisemitism envoy nominee Deborah Lipstadt encouraged Jews to do as an act of courage — was heartening.

I could not do this without all of you showing up tonight, whether in this sanctuary or online. You are showing up not just for Central, but for Judaism. You’re showing up for fearlessness in the face of fear. None of us can do this alone, even as this pandemic has tested us and forced us to feel more alone than we ever thought we would have to be. But our tradition keeps pushing us back into community and tells us not only that we need to do this with each other.

Among those who were at Central on Friday night was New York City Mayor Eric Adams, who spoke earlier in the service, before leaving for Harlem, where two police officers had been shot, one fatally.