In battle for the Senate, the Iran nuclear deal is looming large 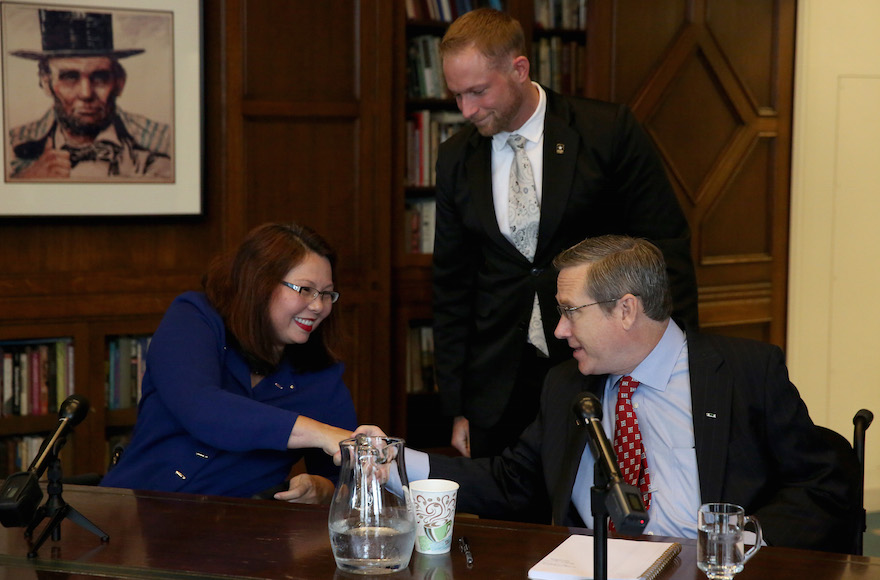 WASHINGTON (JTA) – While the Iran nuclear deal gets fleeting attention in the presidential race, it is shaping up as a key issue in at least nine states integral to Democrats’ hopes of regaining control of the U.S. Senate.

Rival pro-Israel factions are pouring money into many of those races, and candidates are using support or opposition to the controversial deal as a means of tarring their opponents.

And depending on what happens in November, the election could redefine what it means to be “pro-Israel.”

Democrats are seeking four to five wins to regain control of the chamber. Up to 11 states are in play; Iran is an issue in at least nine.

Iran has entered the calculus in a way that reflects the split between J Street, the liberal Jewish Middle East policy group, and the American Israel Public Affairs Committee, the powerful centrist lobbying group. J Street and AIPAC, which does not back candidates, went head to head over the Iran  deal, which exchanges sanctions relief for a nuclear rollback. The former worked hard to keep lawmakers from rejecting the deal; the latter led the effort to kill it.

On Wednesday, J Street said it was ready to spend $750,000 backing endorsers of the deal in four critical races, including two that include expensive ad buys on TV.

Pro-Israel political action committees that lean further to the right, including NORPAC and the Republican Jewish Coalition’s PAC, are spending on candidates who opposed the Iran deal.

“We’re aiming to fundamentally transform the political calculation by demonstrating that the Iran nuclear agreement and diplomacy-first approaches make for good policy and for good politics,” Jeremy Ben-Ami, J Street’s president, said in rolling out the ad campaign.

“The Obama/Clinton Iran deal puts Israel at risk and makes us less safe” is the title of one of several leaflets that the Republican Jewish Coalition has distributed to Jewish homes in several key states.

Here’s a look at how the battle is playing out and what it means.

What are the numbers?

There are 34 Senate elections this year. Polling suggests that 11 could switch parties, although incumbents in some of these have begun to pull away from challengers in recent weeks. Ten of the races – Arizona, Missouri, Wisconsin, Illinois, Indiana, Ohio, Pennsylvania, North Carolina, New Hampshire and Florida – could go from Republican to Democrat. Nevada could go the other way.

J Street is making backing for the Iran deal a factor in nine of the 11 races while endorsing Democrats in Illinois, Wisconsin, New Hampshire, Arizona, Nevada, Pennsylvania, Florida, North Carolina and Ohio. It’s sinking money into the closest contests — in Wisconsin, Illinois, New Hampshire and Pennsylvania.

Show me the money: How high does Iran loom?

In Illinois, where Sen. Mark Kirk, the incumbent Republican and a longtime leader in passing Iran sanctions, faces Rep. Tammy Duckworth, contributions from both sides of the Iran debate loom large

OpenSecrets, the campaign finance tracker, shows that Kirk’s single biggest donor among PACs is NORPAC. Donors have funneled $130,931 to date to Kirk through the New Jersey-based pro-Israel PAC.

In Wisconsin, J Street ranks third among the PACs backing Democrat Russ Feingold, the former Wisconsin senator who is challenging the man who replaced him, Republican Ron Johnson. Feingold, who is Jewish, has earned $68,600 in contributions from J Street. Johnson, a millionaire who self-funded a hefty portion of his 2010 campaign, has attracted $29,200 from pro-Israel PACs to the right of J Street.

The Republican Jewish Coalition has launched door-knocking and phone-banking campaigns in Florida, Pennsylvania and Ohio, with a main focus on protecting Republican incumbent senators, citing their opposition to the Iran deal.

What are the arguments?

“X and Donald Trump oppose the Iran deal,” it begins, and “X thinks he (she) knows better – like Donald Trump, he (she) is wrong.”

In between, the ad cites U.S. and Israeli security experts as saying the “stringent” components of the deal “prevent Iran from producing nuclear weapons.” (Israel’s government opposes the deal, and its security experts have said the deal appears to be working. But these experts also are anxious about the expiration date of many of its restrictions, in 15 years.)

Sen. Rob Portman, the incumbent Republican in Ohio, has run since the summer of 2015 at least three ads attacking his J Street-backed challenger, former Gov. Ted Strickland, for backing the Iran deal. Portman’s emphasis has been how the sanctions relief frees up funds Iran “can now use to fund terrorist groups,” as the campaign put it in a February ad.

Sen. Marco Rubio, the Republican incumbent in Florida, ran hard during the presidential primaries on his opposition to the Iran deal, and he’s doing the same in his bid to keep Rep. Patrick Murphy, D-Fla., from taking his seat. (Murphy is another J Street endorsee.)

Rubio, in an interview last month with a Miami-area NBC affiliate, brought up Murphy’s backing for the Iran deal as an example of his “loyal” support for Obama’s “liberal agenda.” Rubio said in the interview he would work to pass legislation that would restrict how a president can use funds to facilitate the deal, citing the $400 million in frozen Iranian funds the United States released in January after Iran turned over five American prisoners. The Republican Jewish Coalition and others called that a “ransom payment” to Iran; the administration counters that it was “leverage” needed to “achieve multiple U.S. objectives.”

“I hope Patrick Murphy will vote to make sure something like that doesn’t happen again,” Rubio said. “We’ll see.”

In previous years, candidates seeking the pro-Israel vote and money hewed to parameters set by centrist organizations like AIPAC or those to its right. The handful who defied those norms invited infusions of cash for their opponents from pro-Israel givers.

J Street, launched in 2008, sought to change those terms by creating room for candidates to embrace a more aggressive U.S. intervention in Middle East peacemaking.

Until this year, that metric left plenty of wiggle room: AIPAC, after all, embraced the two-state solution, and there were plenty of lawmakers who could comfortably work the halls of AIPAC’s policy conferences and also appear at J Street’s annual dinner as sponsors.

J Street wants to change the Israel calculus in how candidates run for office, and the either-or nature of the Iran debate is part of that formula.

AIPAC, however, is hardly going away: Last month, it got 88 senators to sign off on a letter urging Obama not to allow the Palestinians to pursue statehood recognition absent peace talks during Obama’s final months in office. Some of the 12 who did not sign on, including Rubio, abstained because the letter embraced an outcome — the two-state solution — no longer endorsed by the Republican Party.

* A win by Democratic presidential nominee Hillary Clinton coupled with a retaking of the Senate would consolidate the Iran deal as unsinkable and make J Street’s win in last year’s congressional lobbying wars more formidable.

* J Street could also seize on the ouster of senators closely identified with trying to kill the deal – as opposed to those who simply followed GOP party lines and voted against the deal – as a sign that hewing the AIPAC line is box office poison. Among those at risk who fit this bill are Ayotte, Kirk, Rubio, Portman, Roy Blunt of Missouri and John McCain of Arizona.