‘I’m not angry at all’: Owner of looted Chicago photo shop vows to rebuild

(JTA) — Don Flesch managed to grab just one item from his downtown Chicago camera shop as it went up in flames Saturday night: the antique Kodak that was the first camera his grandfather sold after he opened the store in 1899.

But Flesch said he harbored no ill will toward the people who looted and burned Central Camera amid sweeping demonstrations sparked by the killing of a black man by a Minneapolis police officer on Memorial Day.

“I’m not angry at all,” Flesch told the Jewish Telegraphic Agency. “I’m upset that people didn’t stay with Black Lives Matter. That’s why this whole thing started to come about.”

Central Camera, located in the shadow of an elevated train on South Wabash Avenue, just blocks from Chicago’s storied Art Institute, is one of several notable Jewish-owned businesses to sustain damage in weekend demonstrations. In Los Angeles, the historically Jewish Fairfax district was an epicenter of protest, while a kosher Israeli restaurant was damaged in Washington, D.C.

Like many of the other owners, Flesch has expressed solidarity with the protesters and has vowed to rebuild his store. He’s getting assistance from the legions of camera aficionados who have donated to a crowdfunding campaign, which had netted nearly $140,000 by Monday night.

But some of what was lost Sunday night will be impossible to restore, including rare cameras and relics from Central Camera’s 121-year history. The store has been a fixture of downtown Chicago for that time, its distinctive neon sign flashing above the storefront the shop has occupied since the 1920s. It’s just a block away from where Flesch’s grandfather, Albert, opened his camera store on East Adams Street in 1899.

Albert Flesch had fled his native Hungary as a teenager rather than consent to forced conscription in the army. Instead he walked to Italy, boarded a boat for Ellis Island and then hopped a train for Chicago. He landed his first job in 1895 in the camera department at the Siegel-Cooper department store on State Street. Four years later he opened Central Camera.

He would run the store for more than five decades, until his death from a heart attack in 1953. Three years after the shop opened, Albert Flesch was one of the first white shopkeepers in downtown Chicago to hire a black man for a retail position when he put a tall African-American named George to work behind the counter. 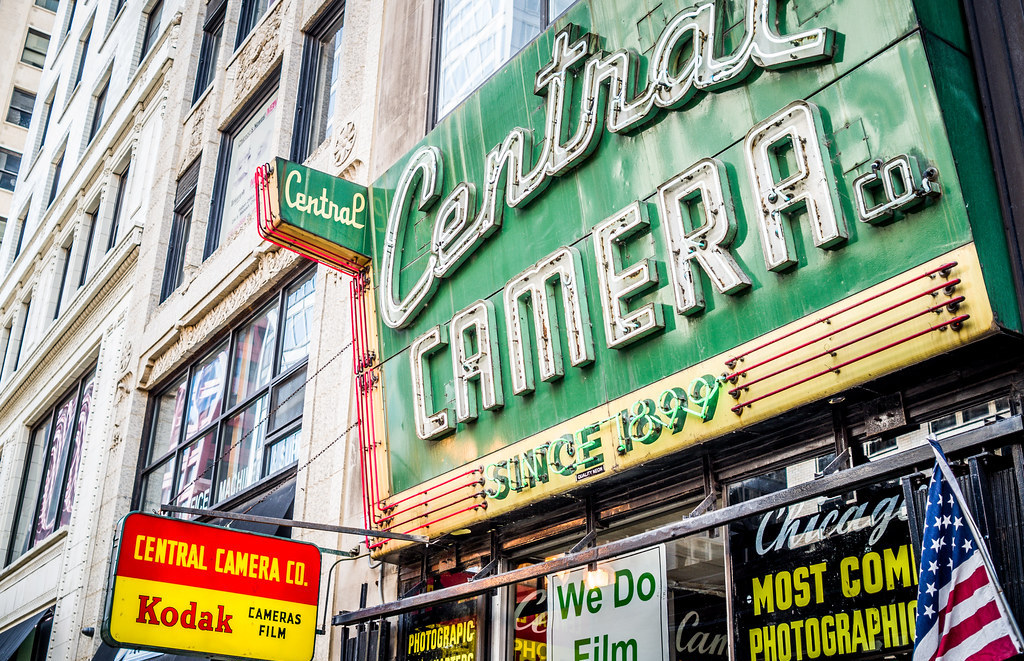 Central Camera has been a fixture of downtown Chicago since 1899. (Flickr)

After Albert Flesch died, the store passed to his sons — Flesch’s father, Harold, and brother Stanley. Flesch would help out on Saturdays while he was in elementary school, and his role expanded as he got older. He started full-time work at the store in 1968.

At one point, there were so many Flesch men working there that they began referring to each other by their first initials.

Flesch’s mother’s family, the Leibermans, came from Poland, and the family lived in Hyde Park on Chicago’s South Side, where they attended Sinai Congregation, the oldest Reform synagogue in the city. Flesch married an Israeli woman who shared his interest in photography and the couple had two children before divorcing.

On Saturday night, Flesch was at home in suburban Skokie when he learned that alarms were going off at Central Camera. He arrived downtown nearly an hour later, watching helplessly from across the street as looters ransacked the place.

“People were just coming in and out, going in with nothing and coming out with something,” he said. “I didn’t like it, but I couldn’t stop it. And I wasn’t going to try to stop it.”

Neither Flesch’s twin brother Ronald, an architect, nor his two kids have shown any interest in taking over the family business, and Flesch isn’t sure what will happen to the three-generation company when it’s time for him to retire.

In the meantime, he’s vowing to rebuild.

“This is my job,” Flesch said. “This is the only job I’ve ever had. I want to keep it alive. We’re going to rebuild. We’re going to come back as good or better as we were before.”