WASHINGTON (JTA) — When I joined the Bernie Sanders campaign as its Jewish outreach director, I did so with a firm belief that what Sanders represented — a commitment to healing the world, promoting Middle East peace and fighting anti-Semitism — was perfectly aligned with the values of the Jewish community. And it was.

During the campaign, Sanders spoke boldly through the Jewish language of inclusivity and tolerance. He fought for everyone to have health care, to stop the climate crisis in its tracks, to transform our criminal justice system, to make a fairer economy that works for everyone, and to work relentlessly for peace. His campaign was embraced by young and ethnically diverse voters at inspiring levels. He fought for our better angels and called on all of us to love instead of hate.

That’s why it’s easy for me to now wholeheartedly support and endorse Joe Biden for president of the United States. I’m confident that Biden will be able to advance the progressive American Jewish priorities I fought for on behalf of Sen. Sanders.

Right now, as we watch catastrophe unfold due to Donald Trump’s bungling of the coronavirus pandemic, Middle East peace pushed further away by Trump, and a dramatic rise in violent domestic anti-Semitism on Trump’s watch, it’s clear that a second term for Trump would constitute a direct threat to the wellbeing of American Jews.

I understand that not everyone in the progressive Jewish community is sold on Biden. Some are concerned that he’s insufficiently progressive on domestic policy; others are worried that his positions on Israel will not advance peace. But as someone who has served under both men, I can affirm that Biden is by far the best choice to be the country’s next commander in chief and that he will advance our progressive values.

I first got to see Joe Biden fight for these values when I was a Senate aide more than a decade ago. At the time, I was working for Sen. Frank Lautenberg (D-N.J.), a proud Jewish member of Congress. Sen. Lautenberg fought for refugees, including authoring an annual legislative amendment that was first designed to facilitate visas for Soviet Jews, and was then later used by religious minorities facing persecution to come to the United States. One of his most important allies in supporting this progressive legislation was none other than Chairman of the Senate Foreign Relations Committee Joe Biden.

Later, when I worked for J Street as a Middle East peace activist, I saw Israeli Prime Minister Netanyahu push back against President Obama’s forward-thinking calls for an Israeli settlement freeze. When Israel announced a settlement expansion during a visit Biden took to the country, the vice president criticized this counterproductive move that undermined peacemaking while also keeping the relationship on solid footing. By showing tough love at a tense moment, he stood up for a core progressive priority and for peace.

When I worked at the Ploughshares Fund, advocating for ridding the world of nuclear weapons, including for diplomatic agreements to both shrink Russia’s nuclear arsenal and prevent a nuclear-armed Iran, then-Vice President Biden was a clear-cut champion for this work. As a presidential candidate, Biden has already vowed to reenter the Iran nuclear deal, a major progressive priority.

But above all, Joe Biden’s unequivocal rejection of hate in our country right now is extraordinarily important for American Jews. Just like the coronavirus, hate is a disease that, if left alone, will quickly spread and metastasize. Biden understands this. When he launched his campaign, he brought up the Nazi rally in Charlottesville as a key motivator for his desire to be president, declaring that his vision for the country was unity, not division.

That alone is cause enough for progressive American Jews to back him fully. And now that the primary is settled, we must.

In our democracy, when the primary is decided, the vanquished support the victor. One candidate wins, all the other candidates lose. That’s why Sen. Sanders and all the other Democratic primary candidates have endorsed Joe Biden for president.

Nonetheless, while the vast majority of American Jews consistently vote for Democrats in election after election, and the primary has been settled, not one progressive vote should be taken for granted.

Instead, progressives need to believe in their candidate. I do, and that’s why I’ve written this piece.

So to my progressive brothers and sisters, let’s be clear: Our values will have an opportunity to play a central role in Joe Biden’s White House. That will not be the case in a second term for Donald Trump — we have already seen enough of what he can do. With Biden, we will have influence and allies. With Trump, we will have an adversary attacking both us and our values every single day.

The cold hard truth now is that we progressives should not be playing Russian roulette with this election, either by sitting this one out or by casting a protest vote. In November, there will only be two candidates with a realistic chance of winning: Joe Biden and Donald Trump. The choice between them is clear.

American Jewish progressives must therefore support Joe Biden for President. Every single progressive Jewish vote for Biden matters and will truly help us to heal this hurting world. 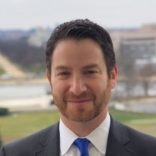 was the Jewish Outreach Director for the Bernie Sanders 2020 Presidential Campaign. He also served in the Obama-Biden Administration as a Deputy Assistant Secretary of State. You can follow him on Twitter at @joelmartinrubin