I got married during the pandemic — and my wedding was perfect

NEW YORK (JTA) —  On March 16, the man I was dating asked me to become his wife. At the time, social distancing was a relatively new phenomenon and Lysol wipes were still available for purchase at my local drugstore.

However, the fear and uncertainty had begun to spread, and only about 15 people attended my engagement celebration. With the sparse knowledge that we had in early March, I wasn’t bothered by the slightly muted celebration, knowing my wedding day would come just a few months later, as is the standard in my Orthodox community. My fiance returned to his home state of Florida, and I expected to see him again in the next week or so. But as the number of cases began to increase suddenly and shockingly, I soon began to realize that life as we knew it was about to be replaced by an unforeseen reality.

The wedding I had expected would feature the usual aspects of a wedding and proceed as my siblings’ ceremonies had: flower arrangements, a beautiful hall, camera crews, catered meals and hours of dancing with all of my friends and family.

It was five weeks until I saw my fiance again. At first I thought we should push off our wedding to a time of more certainty. However, while deliberating in person, my future husband and I became increasingly aware that the only path to the wedding we envisioned and expected would require significant delay. Under Jewish law, a relationship is not meant to be intimate until after marriage, and a marriage is generally not supposed to be delayed.

Due to the travel restrictions that prevented us from seeing each other, FaceTime became our main means of communication. The allure of a “normal” wedding began to fade if it meant spending more time in this awkward reality.

After returning home, I posed the question to my parents: “Is it possible to plan a wedding for two weeks from today?”

After recovering from the initial shock, they were ready to hear my reasoning. I explained that waiting in limbo indefinitely wasn’t worth postponing the very much anticipated next stage of my life. After hearing me out, my ever-supportive parents were on board. With one call to the party planner the following morning, the chaos began.

While we ran frantic errands and attended numerous appointments, our party planner transformed what was once a bare slab of backyard concrete into a draped and detailed outdoor wedding hall. Two weeks later the day arrived, and it was one that the 40 or so people in attendance will never forgot.

I’m the youngest of five married siblings, and we were all in agreement that my wedding had an element that was absent from any other we had attended: a pure joy created by the small crowd, allowing everyone to totally focus on the unification of two people.

A positive mindset is one of the most powerful tools we have. Throughout this entire ordeal, I never felt anything other than fortunate. I had been given what so many others hope and pray for — the opportunity to begin the rest of my life with someone who possessed qualities that far exceeded my expectations.

While I understood that our wedding would not be “normal,” the essence of what we were trying to achieve on this monumental occasion would be exactly the same. A wedding itself is not the goal but a means to a much greater and higher purpose.

It seems fairly easy to become entangled in and overwhelmed by the details that make up a typical wedding, and the significance of the journey on which the couple is about to embark may become muddled under the layers of other aspects that compete for their attention.

In contrast, our wedding day was stripped down to the bare minimum: We were extremely limited in terms of guests, venue options and even the menu. To me, that “void” was filled with something worth so much more: meaning. The focus of my wedding was nothing other than me and my husband. When his foot broke the glass, we began the life we had long anticipated.

My wedding, bereft of all frills and embellishments, was not a compromise — it was a gift. After a wedding and the excitement of the day has passed, a couple is left with only themselves and the life they will build together.

My husband and I had that mindset since the beginning because we didn’t have a regular engagement period. In this way, in the weeks leading up to the wedding, we were able to focus on what we were about to embark upon and what exactly this next stage of life meant to us.

It made the day itself and every day that followed that much more meaningful, knowing the foundation of our marriage was built on our relationship, not the details. My husband and I started our marriage focused on the core of what a marriage is truly about; that’s priceless.

Although I originally felt only acceptance for my unconventional wedding situation, in time I began to feel grateful.

I could view my wedding as a chance being taken from me — I choose to see it as an opportunity I was given. A small backyard wedding can appear lacking in its simplicity, but mine was incomparable in its beauty and meaning because of its simplicity. 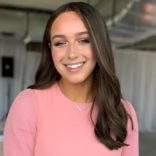 is a pre-PA student at Touro College and works as a medical assistant. She lives in the Orthodox community in Brooklyn, New York.