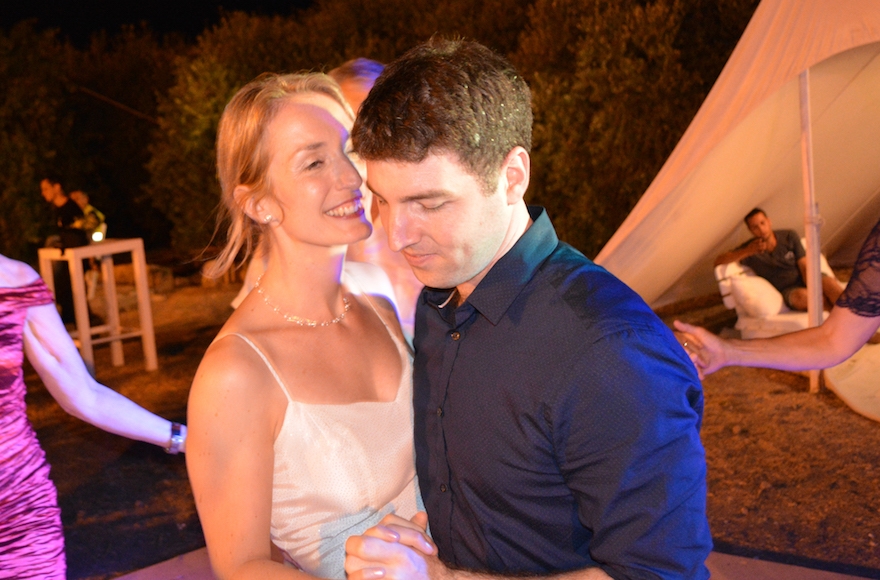 Cnaan Liphshiz and wife Iris celebrating their wedding in the Netherlands, July 2, 2013. (Courtesy of Liphshiz)

AMSTERDAM (JTA) — My wife and I were married roughly 5,000 diapers ago, and she’s still waiting for me to propose.

I know this because she reminds me every anniversary.

To be clear, ours was no shotgun wedding. Iris and I were hitched in a civil marriage in Holland five years ago — a wholesome two years before our first child arrived.

But issues persist with my marriage proposal in 2013. Iris claims that I mumbled, over scrambled eggs, “So, like, do you want to get married or something?” But I think we had pancakes that day.

What she’s owed, I guess, is one of those orchestrated productions involving playful deceit, an airplane banner and a seaside kneel to the sounds of saxophone played by a hired musician who pops out of nowhere at exactly the right time along with two cameramen and a boom operator.

But for a fuss-averse pragmatist like me, such affairs feel far too unnatural.

Which is why it may seem a bit strange that I am arranging (if you can call it that: We have less than a week to go and no ring) a second wedding ceremony. This time it’s with a rabbi, huppah, ketubah — the whole shebang.

And it’s all at my insistence.

To be honest, it makes no sense to be doing it now, when we already have our hands full with two small children. Or at all. While we are both Jewish according to halachah, Orthodox law, neither of us observe its laws. We don’t even believe in God, let alone what Orthodox Judaism says are His rules for matrimony.

But after some soul-searching over Rosh Hashanah, the Jewish New Year, I realized that my desire for a Jewish wedding is rooted in a growing uncertainty — that of belonging to a persecuted people whose own identity and place in Europe, and Israel, are being redefined rapidly.

Essentially, I want to have an Orthodox wedding and a ketubah — a Jewish religious marriage contract — to guarantee our children’s eligibility for becoming card-carrying members of any stream of Judaism, and for remaining Israeli citizens.

As things stand today, they already qualify as both even though their parents don’t have a ketubah, which in Judaism is optional anyway. (In halachah, a man and woman technically need neither ketubah nor wedding ceremony to be husband and wife – cohabitation is enough to seal a marriage, although the practice was discouraged by the rabbis.)

Our kids can obtain Israeli passports because I am a citizen.

And because my wife is Jewish according to halachah (her mother had an Orthodox conversion before my wife was born), our son and daughter meet the definition of who is a Jew under a matrilineal standard accepted by all streams.

But amid radicalization in Orthodox circles in Israel and beyond, there seems to be little guarantee that this will be the case 20 years from now. Our ketubah may therefore shield our children from scrutiny and complications.

In 2016, for example, an Orthodox rabbinical court in the Israeli city of Petach Tikvah retroactively declared a woman non-Jewish. She had undergone an Orthodox conversion overseen by Haskel Lookstein – one of the most highly regarded Orthodox rabbis in North America. Nevertheless, the Chief Rabbinate has begun to treat all conversions performed in America as suspect, as JTA has reported.

Amid this war among Orthodox rabbis, can anyone guarantee that hardliners won’t move to disqualify as Jews those who were born to converts? Or, for that matter, a Dutch Jew whose parents never bothered to get married in a Jewish ceremony?

Consider the case of Yossi Fackenheim, the 39-year-old son of the late Holocaust survivor and Reform rabbi Emil Fackenheim. In 2009, an Orthodox dayan, or rabbinic judge, in Jerusalem retroactively declared null and void the younger Fackenheim’s Orthodox conversion to Judaism in Canada at the age of 2. The stated reason: The convert did not lead an Orthodox observant lifestyle.

Fearing this radicalization, I want to make sure our son and daughter have documentation to escape such injustice, for example, if and when they choose to marry Jewishly.

Deeper under the surface, though, there are other concerns driving me to retie the knot.

In the eight years that have passed since I moved to the Netherlands, dark clouds have gathered over Western Europe, making it increasingly inhospitable to Jews. Against a backdrop of anti-Semitic conspiracy theories and smears, violence against Jews is making a huge comeback in this part of the world.

In Amsterdam, where we live and enrolled our children in a heavily guarded Jewish kindergarten, a Syrian asylum seeker last year vandalized a kosher restaurant while waving a Palestinian flag to protest President Donald Trump’s moving of the U.S. Embassy in Israel to Jerusalem.

In Antwerp, where I sometimes spend Rosh Hashanah with my relatives, an Arab driver is believed to have tried to run over a Jew and his son while they were walking to synagogue earlier this year. In 2014, an Islamist allegedly murdered four people at the Brussels Jewish museum.

In France, a jihadist killed a rabbi and four children at a Jewish school in 2012. Another Muslim fundamentalist murdered four Jews at a kosher store in 2015. And in 2014, gangs of rioters attacked at least nine synagogues in that country as payback for Israel’s war on Hamas.

Even Britain, which many local Jews have long thought of as a safe haven, is seeing the resurgence of anti-Semitism, including inside the Labour Party under its populist far-left leader, Jeremy Corbyn.

A future here is becoming increasingly difficult to imagine for our children, to whom I speak in Hebrew and whom I often sing to sleep by butchering Naomi Shemer’s Zionist song about Jerusalem, “Yerushalaim shel Zahav.”

Israel must remain a fortress that’s open to them.

By Israeli law, they are entitled to citizenship as my children even if they weren’t Jewish. But laws can be changed — and by the same group of people who are retroactively declaring people non-Jewish.

Granted, these are pretty somber motives for getting hitched. But after studying our ketubah with our rabbi, I feel entitled to some pessimism.

“It’s basically a prenup,” the rabbi told me about the text written on parchment, which states the man is responsible for the woman’s well-being and specifies what alimony he’d pay her if he divorces her. “Nobody likes a prenup, so I don’t call it that. And it contains some rosy talk about the joys of marriage. But make no mistake, this document is about what happens if it all goes wrong.”

Then there’s the fact that as Jews, we’re told to remember the destruction of the Temple in Jerusalem when we wed. That’s why, traditionally, Jewish men break a glass under the huppah, or canopy.

Living as a Jew in Europe, a graveyard for 6 million Holocaust victims, destruction is never too far from my mind.

Such pessimism also extends to Israel, where despite phenomenal successes and inspiring expressions of unity, polarization in society has joined neighborly hostility as a major threat to a viable future in a homeland for all Jews.

Still, I think of our Jewish wedding also as acknowledgment and appreciation of the tremendous privileges with which I’ve been blessed and seek to preserve.

The first is living with the best partner I could’ve hoped for. The second is our children’s place in the world’s only Jewish country. In joy and in sorrow, in sickness and in health, and hopefully long after death does us part.