Hundreds protest outside of court as Netanyahu corruption trial opens 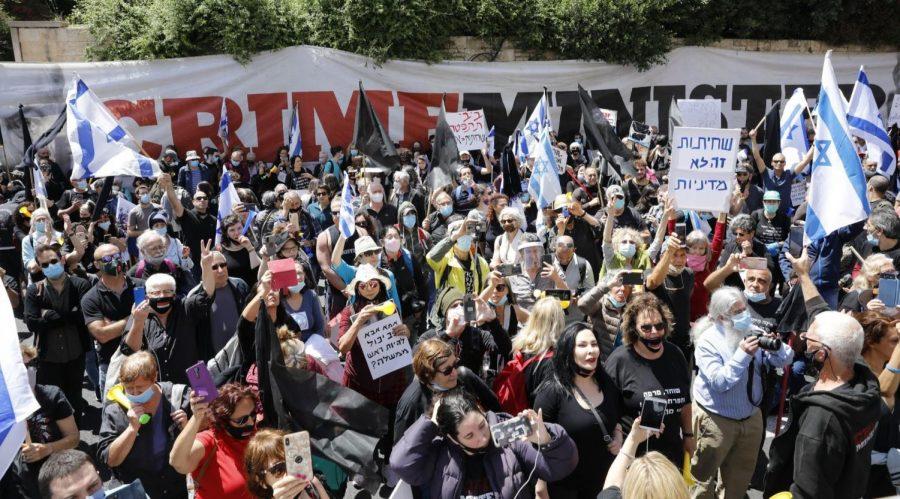 Protest outside of the Prime MInister's residence in Jerusalem on the first day of Benjamin Netanyahu's corruption trial on May 24, 2020. (Olivier Fitoussi/Flash90)

Demonstrators both criticizing and supporting Netanyahu also could be found outside the Prime Minister’s official residence in Jerusalem.

Netanyahu arrived at the Jerusalem District Court on Sunday afternoon directly from presiding over his first Cabinet meeting with his new government.

Before entering the courtroom, Netanyahu reiterated his criticism of the trial. “These investigations were corrupted and fabricated from the start,” he said while flanked by by security guards and government ministers from his Likud Party. He added, “This is an attempted political coup against the will of the people.”

Once inside the courtroom, Netanyahu refused to sit at the defendant’s table, known as the dock, until cameras had been removed and the door closed. But he also called for the proceedings to be televised live.

The proceedings lasted for about an hour. Netanyahu will not be required to attend the next hearing, according to reports.

“Like any other citizen, the prime minister is innocent until proven guilty, and I am confident that our justice system will give him fair trial,” Alternate Prime Minister and Minister of Defense, Benny Gantz, tweeted. “I would like to reemphasize that my colleagues and I fully trust our legal system and law enforcement agencies.”

“Now, perhaps more than ever, we must move toward unity and conciliation, as a country and as a society, for the State of Israel and all of its citizens,” he added.