How Tel Aviv creatives made art out of the coronavirus crisis

TEL AVIV (JTA) — Designer Yoav Gati was walking around his south Tel Aviv block in March when he saw a discarded latex glove on the street. A few meters later he spotted another one, and then another.

By the time he looped back home he had collected over a dozen photos of them, clearly a product of the coronavirus crisis. Unexpectedly, artistic inspiration hit.

“I had a photo gallery full of gloves,” Gati recalls. “When I looked over them something about the shapes and colors made me see all sorts of things — a nest full of baby birds, a monkey, a rabbit.”

He scanned the photos and added doodled details to turn them into characters: Roger the fish, for example, hates being asked if he’s got plans today. Avikam the purple walrus doesn’t know what day it is, and doesn’t care.

On Instagram, Gati received an enthusiastic response to his oddball cast of coronavirus characters and started a new account called @glove.stories — encouraging followers to share their own photos of throwaway gloves, both for fun and to call attention to the littering that has sprouted from the pandemic. To date, over 100 people from Tel Aviv and beyond have played his game.

(Don’t worry about him, he’s being sanitary: After photographing the gloves, Gati carefully disposes of them using a stick.)

“It’s become a thing, sort of a new coronavirus routine,” Gati says. “This is great fun for me — I’ve been able to raise awareness about an issue that was bothering me personally, and it also helps others and myself express creativity.”

Gati isn’t alone among Tel Aviv creatives looking for a way to counter the negative aspects of the current lockdown. For the past couple of months, Israeli designers, photographers, artists and storytellers have started new projects that offer a boost to their surrounding — yet socially distanced — public. 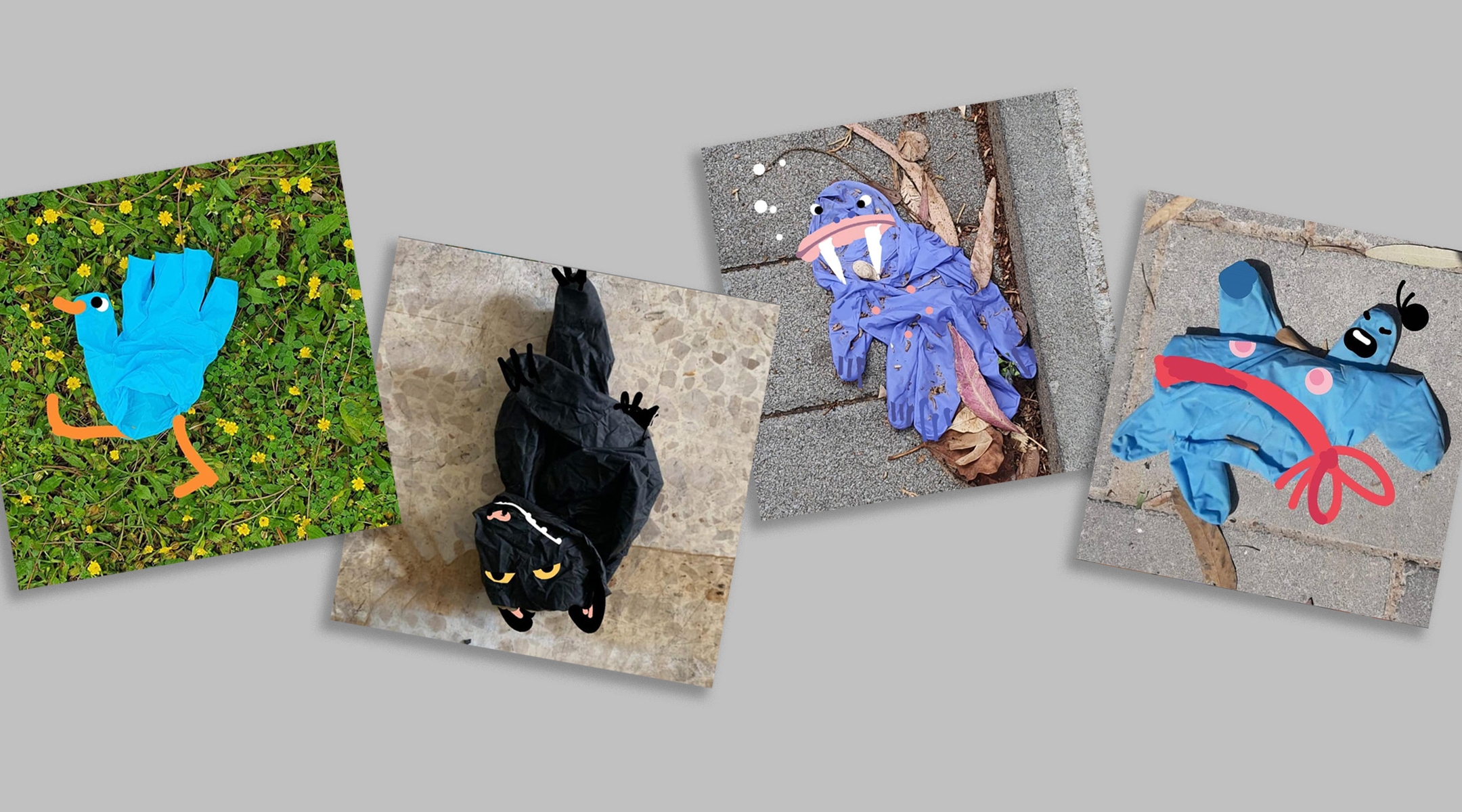 Hagai Farago, an architectural photographer and screen-printer, created a cut-and-fold booklet of iconic Tel Aviv transportation vehicles. Shared for free both on his personal portfolio and on the Tel Aviv municipality website, the booklet has been downloaded hundreds of times. At a time when the city’s residents are urged to shelter in place, Farago’s toy-sized versions of buses, shared taxis and electric scooters tap into a collective longing for mobility.

“A yearning for the city’s streets grew more and more intense during the lockdown period,” Farago said. “From a model of a taxi for my nephews the idea expanded to a booklet of transportation vehicles, and another booklet (coming soon) of Tel Aviv buildings.”

Illustrator Yali Ziv also had homeschooling kids in mind when she released a complimentary set of downloadable coloring pages for “confusing days” in late March, with a note to “feel free to color outside the lines and send me the results.” Known for her love of greenery in her usual work for Israeli and international commercial clients, these black and white pages show local flowers, and women happily indoors with their houseplants and cats.

Meanwhile, in south Tel Aviv, well-known street artist Dede Bandaid recently started drawing on real shekel bills — protecting the faces of the poets who grace Israeli currency with masks. He tailors the size, shape and color of the masks to each of the country’s four bill types. Dede will spend some of these notes during upcoming purchases to get them circulating.

“The idea to draw on money is something I’d also do when I was younger, but here it takes on a completely new and different meaning,” he says. “As an artist used to creating in the public sphere and for a very diverse audience, this format of money bills connects the idea of community with what you have with you at home, and will one day reach someone else.”

It was initially hard for Dede to find businesses where he could spend his embellished shekels, though. Nonessential shops were shuttered for weeks (although some have begun to reopen), leading designer and photographer Teddy Cohen to collect over a thousand notices posted in the windows of Tel Aviv businesses.

“Each sign is interesting and unique,” Cohen says. “Some of them are heartwarming, funny, optimistic, correct, angry.”

Cohen, like Gati, began by photographing things near his apartment. But when he started noticing that these signs were everywhere, he photographed them more intentionally — and has now documented signs in all of the city’s commercial areas.

The messages range from notes about owners missing their happy customers, being out of eggs or even practical things, such as the fact that not more than one customer is allowed in at a time. Called Dear Customers, the project (now with a designated website) documents the current historic moment. His website filters the images by keywords, such as: love, understanding, gloves, take away, instructions, masks, routine. 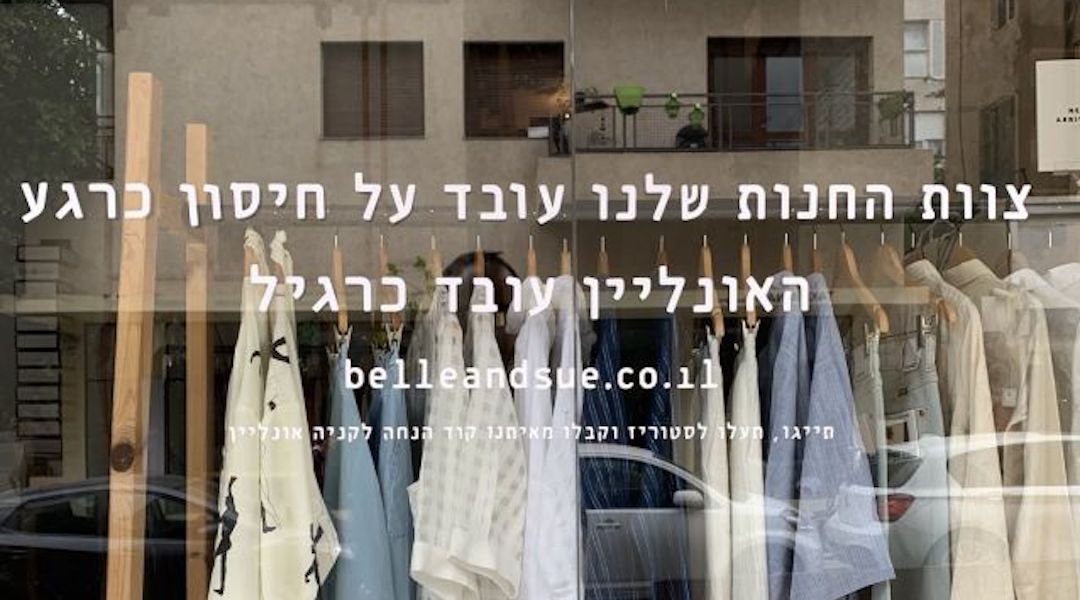 One of Teddy Cohen’s storefront photos. (Courtesy of Cohen)

“It’s obviously sad to see closed businesses, lots of the signs are written in a sad, apologetic, and a mostly uncertain tone,” he said. “But a lot of the signs are also written with an optimistic tone — “we’ll get through this together,” “we’ll see you soon,” “it’ll be okay” — with love and a yearning for the business’ customers, which is fun to see.”

For the past few years, screenwriter Noa Berman-Herzberg (also known as @serialpickler on Instagram) has collected people’s stories of opportunities gone sour, usually over evenings spent eating her homemade pickles. These days, she compiles a list of stories of prospects lost to the effects of the coronavirus pandemic, and she’s developing an English-language podcast to showcase the sour stories.

“Everyone, everyone is missing something during this time,” she says.

This extends to her personally, as well, since her weekly radio show is currently on hiatus, and she’s home from teaching at the Screen-Based Arts Department at Jerusalem’s Bezalel Academy of Arts and Design.

“Sharing sour stories is especially meaningful to people during this time,” she notes. “The feeling that we’re all in this same hard situation together and the opportunity to hear what other people have missed is very comforting.”