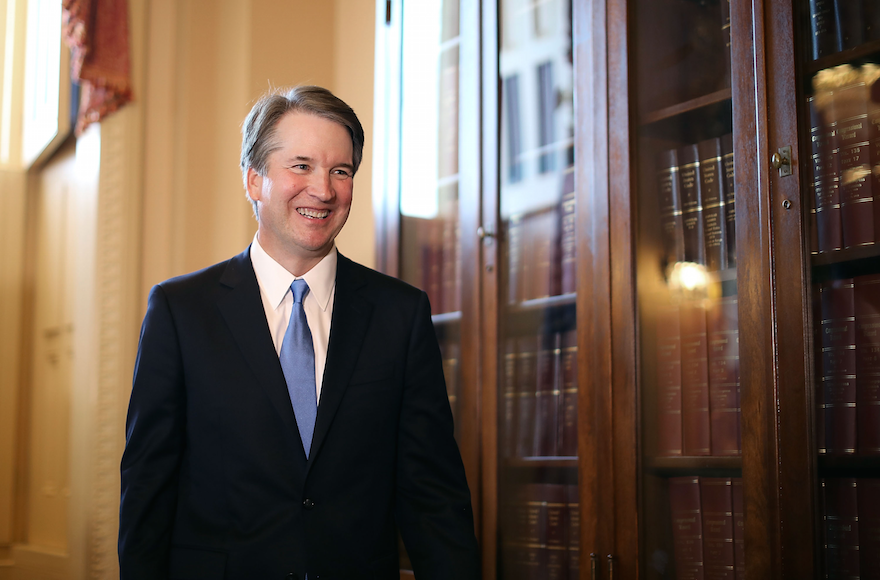 Progressive groups raised flags about the pick, saying Kavanaugh’s record shows he would be a threat to reproductive rights and separation of church and state, while an Orthodox group said it was happy about his record on religious liberty.

Trump announced on Monday evening that he was nominating Kavanaugh, a federal appeals court judge in Washington, D.C., to replace Justice Anthony Kennedy upon his retirement at the end of July.

Within an hour of the announcement, the National Council of Jewish Women released a statement saying it was “incensed” by the choice and helped organize an opposition rally in front of the Supreme Court.

Other progressive groups, such as the Workmen’s Circle, a Jewish organization with roots in the labor movement, denounced Trump’s pick, while the centrist Anti-Defamation League said it was wary that the nominee’s judicial record “does not reflect the demonstrated independence and commitment to fair treatment for all that is necessary to merit a seat on our nation’s highest court.”

On Tuesday, Jody Rabhan, who directs NCJW’s Washington operations, said that Kavanaugh, like the other candidates considered by Trump, was “terrible on the issues that we care about.”

“The assumption based on his record and his ruling is that he would further push the court in the direction of using religion as an excuse to discriminate, not to mention the incredible horrors that could be, should he end up on the court, around reproductive health rights and justice,” Rabhan told JTA in a phone interview.

Many on the left are concerned that a Trump appointee could join a conservative majority in taking away abortion rights and overturn Roe v. Wade, which Trump made a campaign promise. CNN legal analyst Jeffrey Toobin has said that there is “just no doubt” that abortion would be illegal in a significant part of the United States within a year-and-a-half of the confirmation of whomever Trump picked to fill Kennedy’s seat.

In 2006, Kavanaugh said he would respect Roe v. Wade, but Rabhan said that did not assuage her concern.

“Trump has said that overturning Roe v. Wade is a litmus test for anybody on his shortlist for the Supreme Court, and he has made anti-abortion [views] a litmus test for folks he’s nominated to lower courts,” she said. “We’ve seen it, so we believe him.”

Rabhan and others cited a case, Garza v. Hagan, in which Kavanaugh opposed a detained undocumented immigrant minor’s right to obtain an abortion. In that 2017 case, the government had mandated that the teen could leave her detention center to have an abortion. Kavanaugh vacated the order, postponing the abortion for another week-and-a-half, until a court ultimately ruled in her favor. Kavanaugh dissented, writing that the government had betrayed its “interest in favoring fetal life, protecting the best interests of a minor, and refraining from facilitating abortion.”

Marc Stern, the general counsel of the American Jewish Committee, said most of Kavanaugh’s legal record was “unremarkable,” but that his opinion in the Garza case was “disturbing” and raised questions.

“It’s not clear to us what that means exactly,” Stern said. “Does he believe that immigrants have lesser constitutional rights than everybody else? Does he think that teenagers don’t have a right [to an abortion]? … Does he mean only that the government has a right not to participate and you’re sort of on your own?”

The AJC has not taken a position on the nomination, and Stern said it was studying Kavanaugh’s record, specifically with regard to issues of immigration law, religious liberty, separation of church and state, and reproductive freedom. He said that Kavanaugh’s opinion in Newdow v. Roberts, a case presenting a challenge to prayers at the presidential inauguration and the phrase “so help me God” in the presidential oath, offered “some glimmer of hope” for those supporting separation of church and state. Though the challenge by the plaintiff, an atheist opposing the prayers, was dismissed, Kavanaugh said he did have standing to sue.

Stern does not think Kavanaugh would radically shift the court. Although Kennedy was a swing vote on issues like abortion and same-sex marriage, he often was reliably conservative.

“On separation [of church and state] issues, he will read the principle more narrowly than AJC would like,” Stern said. “But from what little he’s written, it doesn’t appear that he’s going to be writing in a whole different vein than where the court as a whole has been — but that’s a guess.”

Agudath Israel of America, a haredi Orthodox organization, has not yet taken an official position on the nomination, but its Washington director, Rabbi Abba Cohen, called Kavanaugh “ a very impressive candidate.” Cohen was happy about Kavanaugh’s rulings related to religious freedom based on an initial overview of the judge’s record. Agudah and other Orthodox groups favor rulings that would exempt religious groups and individuals from generally applicable laws that clash with their beliefs.

“We’re gratified that he’s given due deference to religious liberty and that he has been supportive of a greater involvement of religious organizations and institutions in society,” Cohen told JTA.

Cohen cited Kavanaugh’s opinion in a case relating to contraceptive care exemptions for religious groups, Priests for Life v. HHS. The appeals court agreed that religious employers did not have to provide contraceptives, but had to file a form telling the government they were not doing so. Kavanaugh in his dissent argued that the filing requirement violated the plaintiffs’ religious freedom.

“We support that position, we think that’s giving proper deference to religious rights, and we don’t think that’s in any way a retreat from the rights of others, so that’s one area where we are pleased about,” Cohen said.

During his time in private practice, Kavanaugh took on pro bono cases, including that of a Reconstructionist synagogue, Adat Shalom in Bethesda, Maryland, which was facing challenges from its neighbors in constructing a building. In 2000, a U.S. District Court sided with the synagogue, saying a permit issued to the congregation was consistent with the Establishment Clause. The synagogue confirmed to JTA that it was represented by Kavanaugh but did not return a request for further comment in time for publication.

The Reform movement and the Orthodox Union both told JTA that they were studying Kavanaugh’s record before deciding whether to take a position on his nomination.