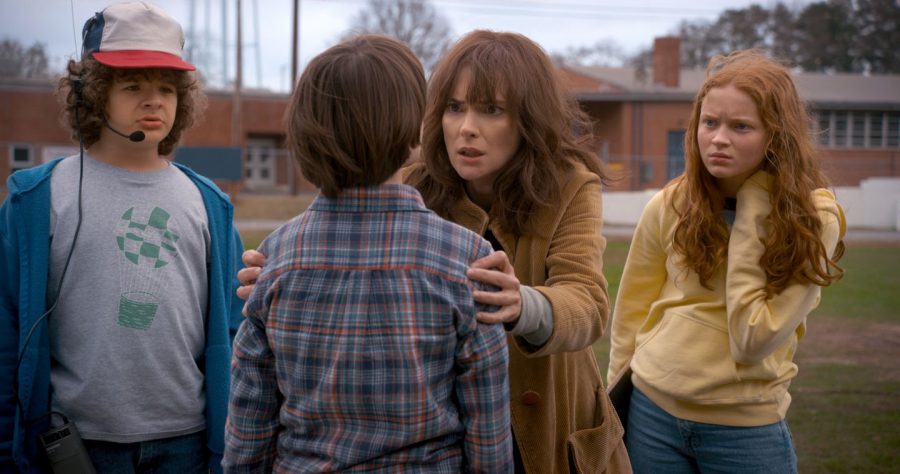 What if I told you one of the world’s most popular shows featured at least three (part at least) Jewish actors and themes?

“Stranger Things,” which premiered on Netflix back in 2016, gave fans a sneak peek today at its upcoming fourth season. Featured prominently in it are Winona Ryder and Finn Wolfhard, who have been series regulars for the first three seasons as well. Wolfhard comes from a family of French, German and Jewish descent. Ryder’s father is from a Ukrainian and Romanian-Jewish family and the actress describes herself as Jewish in interviews. Also, let’s not forget young Noah Schapp.

It’s Schapp’s character, Will Byers, whose disappearance in Season 1 kickstarts the entire plot of the show. Byers plays the son of Ryder’s Joyce, who teams up with the Sheriff (David Harbour) and Will’s other friends (including Wolfhard’s Mike) to track down and find him. But they find themselves up against supernatural forces, a force that is affecting the fictional town of Hawkins, Ind. When another mysterious being named Eleven (Millie Bobby Brown) arrives soon after the disappearance with unknown intentions and abilities, the search goes into hyperdrive.

Oh, but we can’t forget about the indelible Gaten Matarazzo, who is of Italian and Jewish descent. Matarazzo, who was born with cleidocranial dysplasia, plays Dustin, the charismatic friend of the group who leads the cast in “freaked out” and “mystified” expressions. Beloved nearly as much as Brown by viewers, Matarazzo also provides comic relief on the sci-fi heavy series.

The series, created by Matt and Ross Duffer, is a hybrid of that 1980s science fiction tale mixed with “Stand By Me” and “Super 8.” A group of loyal friends find a possible alien being (Eleven) come to their town, and everything starts to change. But aside from the suspense of the adventure, the show boosts young actors in a coming-of-age that includes a budding romance between Mike and Eleven, as they search for young Will.

Few actors on the show got more of a career boost out of “Stranger Things” than Ryder, who had started to drift away from Hollywood in the years leading up to the pilot. Aside from a 2010 role in “Black Swan” as Natalie Portman’s mother and another small role in the “Star Trek” reboot, she wasn’t in much outside of throwaway roles in movies or television shows that didn’t amount to much. But the actress, who turned 50 just 10 days ago and has two Academy Award nominations, found a second wind on the Duffer Brothers’ series, winning back audiences with an engrossing portrayal of a mother slowly losing her mind as she battles paranormal activity and non-believing towns people, like Harbour’s sheriff.

Wolfhard’s Mike takes a leadership role in the group of friends as the series progresses, showing off the actor’s earnest talent. It’s Mike who feels especially guilty for Will’s disappearance, and the show pivots off that into the slow-building romance between him and Eleven.

Season 4 brings more change and possible threats to the table, as the kids grow older and begin to separate across the Midwest with school returning. In the 72-second teaser released today, the sneak peek opens up with Brown’s Eleven adjusting to life in school, getting picked on by kids while writing letters to Mike, who is in a different place and school. But as the trailer closes, there’s a series of images including gunfire, explosions, Ryder getting in the action, and a potential new threat called the Hellfire Club.

The Duffer Brothers promise this new threat ties everything in the series together, but that Season 4 isn’t the last season.

In addition to the trio of actors who are at least part-Jewish, “Stranger Things” boosts common themes that the Jewish community should embrace. One of them is the outsider (Eleven in this case) coming to America and learning our ways while remaining herself and dealing with her own struggles. Another thing is the responsibility taken on by kids at a young age, as in the group of friends coming together with others in town (including Joe Keery’s Steve, who starts out as a bully to them) to defeat the evil entity, called “The Upside Down,” themselves.

But the theme that I found the most fascinating in the linked piece above is the idea of the characters finding more questions than answers, which is typical for kids entering their teenage years and discovering all new avenues of possibilities. It’d be easy to see the evil force as the emotional barometer test for these young souls, but the deeper meaning is that they are finding out life’s limitations and its benefits while not being given concrete answers. The audience has also been kept in the dark about certain aspects of the show, which only drives up the intrigue for Season 4, 5, and hopefully 6.

So, if you haven’t dipped your toes in the Duffer Brothers’ dark magic waters, do so now before the new season arrives. It’s a show that is scary yet also is fun to watch with the whole family and friends as well. Finding out a show has multiple Jewish actors and themes is nice, but especially so if it’s one of the most-talked about shows out there. After all, the reason you’re seeing so many new streaming shows and networks is due to the success of a show like “Stranger Things,” which was Netflix’s first true hit.