How a Chinese fruit became a Sukkot symbol 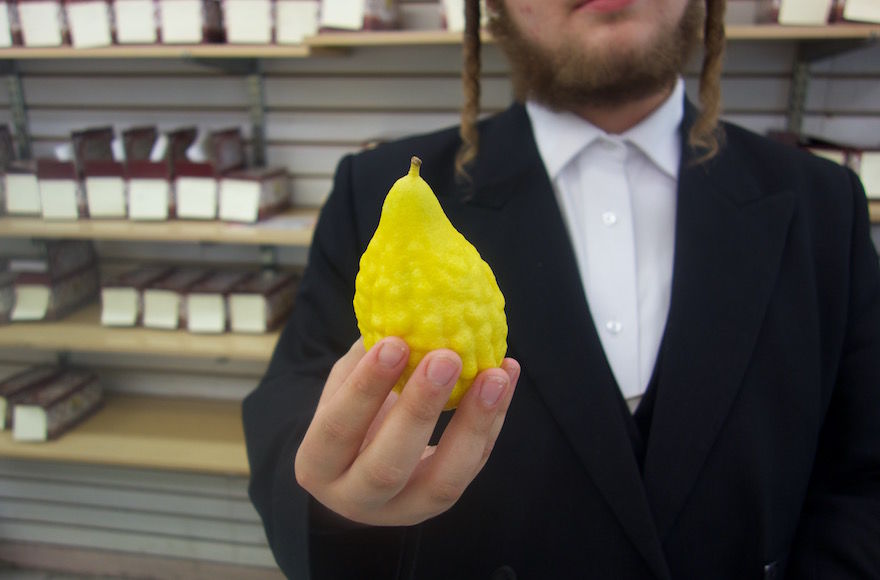 Etrogim can come with a hefty price tag, such as this one that retailed for $345 in Brooklyn. Photo: David Moster

Josefin Dolsten
NEW YORK (JTA) — The holiday of Sukkot isn’t is complete without a lulav and an etrog, the four species that Jews are commanded to wave on the harvest holiday. But according to a new book, it wasn’t until the Second Temple period that Jews started using the lemon-like etrog as part of their Sukkot celebrations.

In ancient times, people would simply use whichever fruits they had harvested in that season, such as pomegranates, grapes, dates and figs, says Rabbi David Moster, who has been researching the etrog for a decade and published a book on its history in April.

That’s because the Bible isn’t quite clear about which fruit God wants the Jews to use to celebrate Sukkot.

Therefore, Jews would use whichever fruits they had available to celebrate Sukkot, according to Moster, the founder and director of the Institute of Biblical Culture, which offers online courses on the Bible.

Things changed during the Second Temple period, however, when a new fruit was introduced to the Land of Israel: the etrog, or citron.

Why did it become widely accepted that Leviticus was referring to an etrog?

Moster says the answer lies in the fruit’s journey to Israel.

The fruit originated in China, where it does not appear to have been very popular, he told JTA. Eventually, the fruit made its way from East Asia to India, where it was used as a remedy for gastrointestinal issues (hence its Latin name, Citrus medica) and appeared in iconography as a fertility symbol.

From there it traveled to the Iran, when the Persian Empire conquered northwestern India around 518 BCE.

As the Land of Israel came under Persian control in 539 BCE, the etrog spread to there as well. It was one of the first foreign fruits to enter the land, Moster says, and it quickly became popular.

Moster says it is impossible to pinpoint an exact date, but at some point during the Second Temple period, “the product of the goodly trees” became widely seen to refer to the etrog.

From there, the etrog gained an even larger significance as a Jewish symbol, and it was used to decorate everything from burial tombs and synagogue mosaics to pendants and lamps. 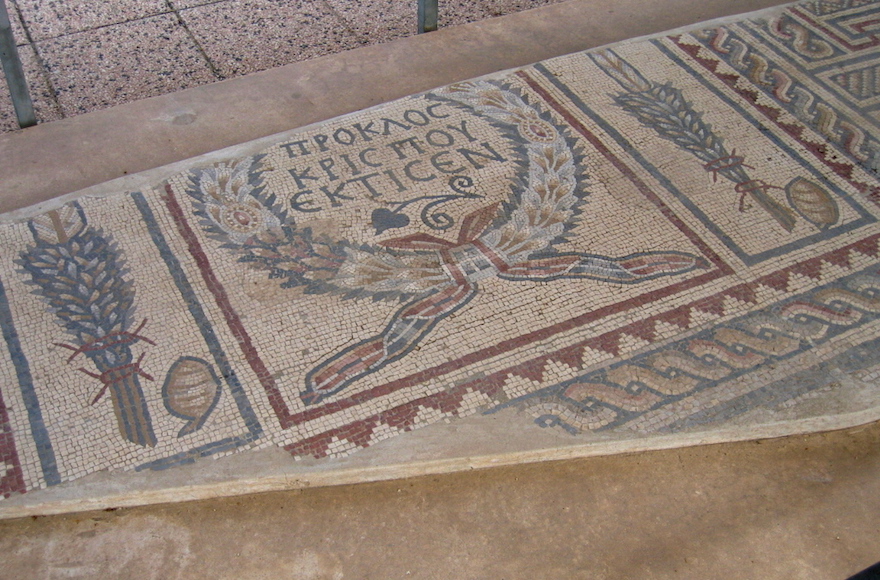 A segment of a synagogue mosaic floor from Tiberias, 7th-8th century CE, features images of the etrog fruit at the Eretz Israel Museum in Tel Aviv. (Yair Talmor/Wikimedia Commons)

The idea was an exclusively rabbinic one. For example, the Samaritans, who claim to be descendants of the Israelites, did not share the interpretation. To this day, Samaritans use an array of colorful fruits in crafting their sukkahs, which look quite different than the leafy ones that Jews tend to build, and the etrog does not play a central role.

As for Moster, he is a big fan of the etrog, and makes an annual trek from his Yonkers, New York, home to Brooklyn’s Borough Park neighborhood, where dozens of vendors sell the fruit ahead of Sukkot.

“My sukkah actually has instead of regular decorations of different types of fruit, we just have etrogim hanging the whole way around,” he said.

Asked how he affords it — etrogim typically aren’t cheap, ranging from $30 to $500 — Moster explains that he buys the real thing for ritual purposes and decorates his sukkah with plastic fruit.