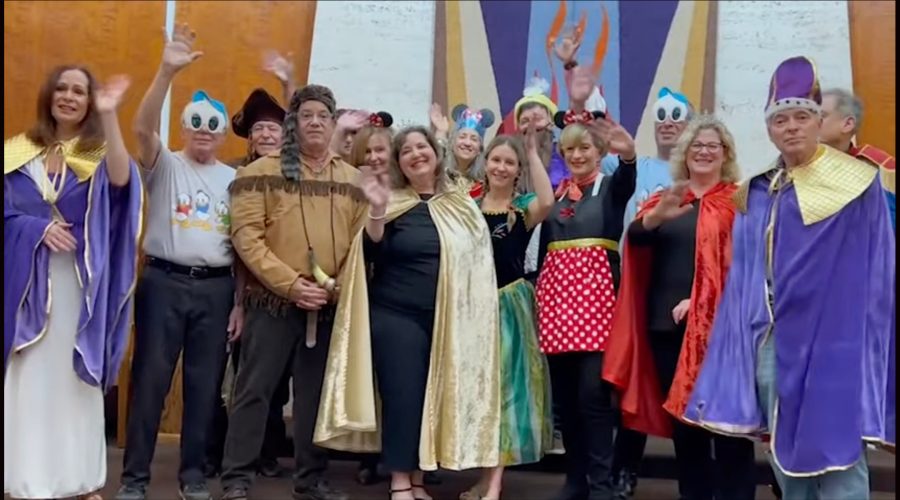 (JTA) — After Russia invaded Ukraine on Feb. 24, Cantors Elena and Sergei Schwartz experienced a flood of concerns: about the country where they grew up, the family and friends they left behind — and their synagogue’s Purim spiel.

Temple Israel of Roslyn, New York, where the Schwartzes began working in 2012, had hired their old friend from Dnipro to produce the humorous holiday video. Olga Tabunshikova’s company, Create-all, had done a bang-up job on Temple Sinai’s Purim video last year, as well as on several smaller video projects for the Reform synagogue since the pandemic sent Jewish life online.

Tabunshikova is based in Kharkiv, an industrial Ukrainian city that has undergone heavy bombing since the start of the war.

They pleaded for her to evacuate the city, like her business partner Aleksandr Bosin had done. But she stayed, and continued working on the project from her apartment, where she lives with her disabled mother.

“We really didn’t know, once the war started, whether she was going to be able to do it,” said Chuck Weiss, the spiel’s director. “But amazingly, she did.”

She’s not Jewish, but Tabunshikova has created enough videos for Passover, Rosh Hashanah, Yom Kippur and Hanukkah that, as Sergei Schwartz put it, “within two years, the depth of her Jewish holiday and Judaism [knowledge] is probably already on the level of anyone in the United States who’s Jewish.” She even had to learn to read Hebrew for a dubbing project — with assistance from the cantors, of course.

This time, Tabunshikova said in a Temple Sinai press release, the Purim project was “a lifeline” during a time of crisis.

“Despite the bombings and the fear of living in a war zone, losing myself in my work has given me a sense of purpose and normalcy,” she said.

The synagogue premiered the video during Shabbat services on Saturday, showing congregants a 30-minute pastiche of parodies of classic Disney films, starring members of the Temple Israel community.

In keeping with the historical tradition of the spiel, the parodies used Disney melodies with with humorous lyrics retelling the Purim story. “Haman Esther Mordechai and King Achashverosh,” for example, was sung to the tune of “Supercalifragilisticexpialidocious” from “Mary Poppins.”

Inspired by Walt Disney World’s 50th anniversary this year, “The World’s Most Magical Spiel” took Weiss and another congregant, David Neiderbach, months to write. Then they held eight rehearsals with members of Temple Sinai’s adult choir before hitting record during a 30-minute performance. 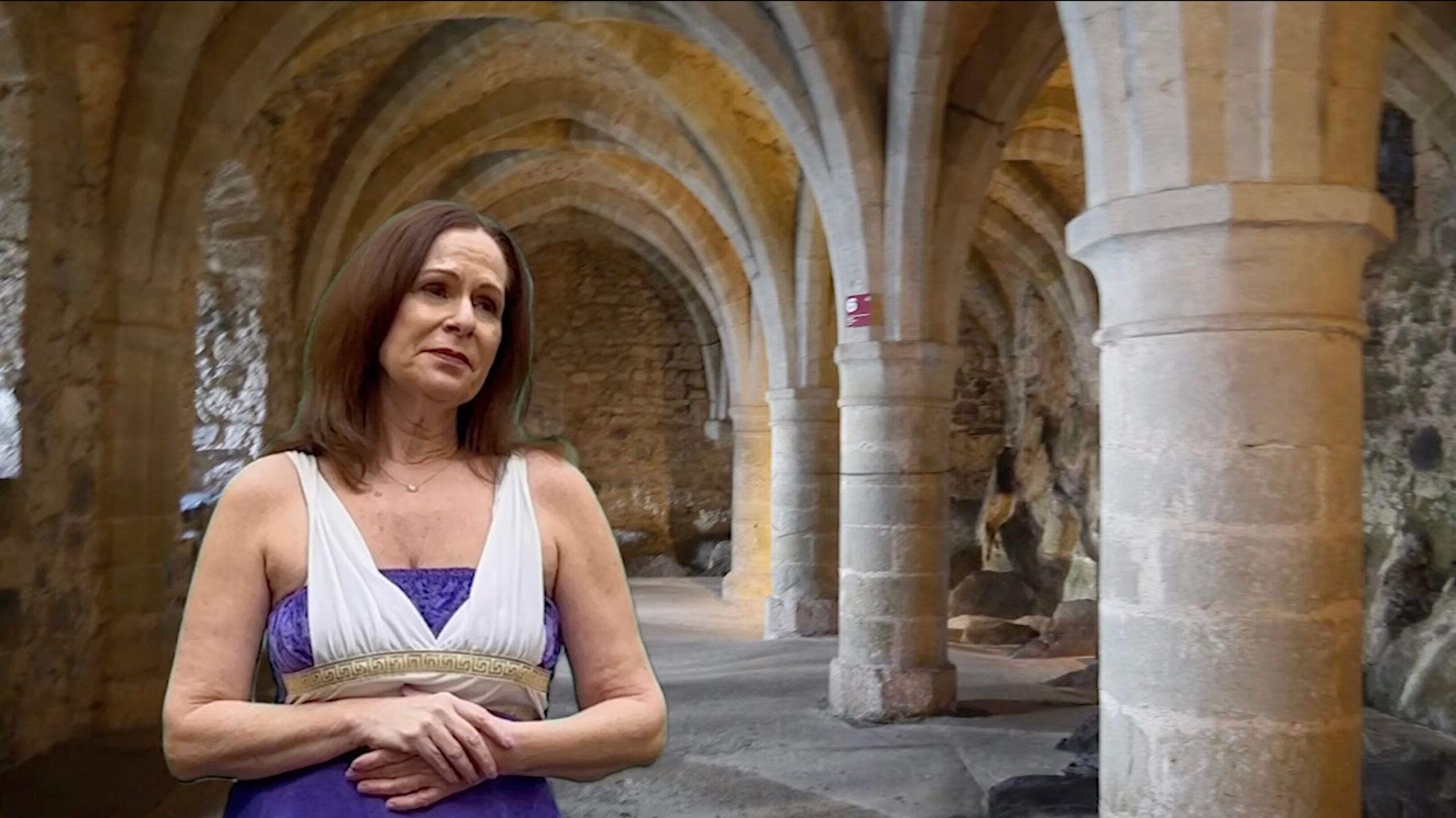 Tabunshikova’s job was to edit the recording, which took place in front of a green screen in order to include backgrounds from the Disney films.

“We were seriously reprimanded that we didn’t iron it,” Sergei Schwartz said about the green screen, a tool used in video editing. “She said that we’re not thinking professionally about it. So she’s very strict. Everything has to be the right way.”

Those were characteristics that the Schwartzes knew well from their time singing together with Tabunshikova in Dnipro, Ukraine’s fourth-largest city. (Now a center of the Chabad movement, Dnipro is home to a 22-story Jewish community center shaped like a menorah.) Sergei Schwartz studied choral music at a university there before he and Elena moved to Israel after the fall of the Soviet Union.

Since coming to Temple Sinai, the Schwartzes have maintained a connection with the Jewish community in Ukraine, organizing fundraisers for Congregation Hatikva, a progressive synagogue in Kyiv. In 2018, the cantors organized a synagogue trip to Jewish sites in Ukraine and Russia. 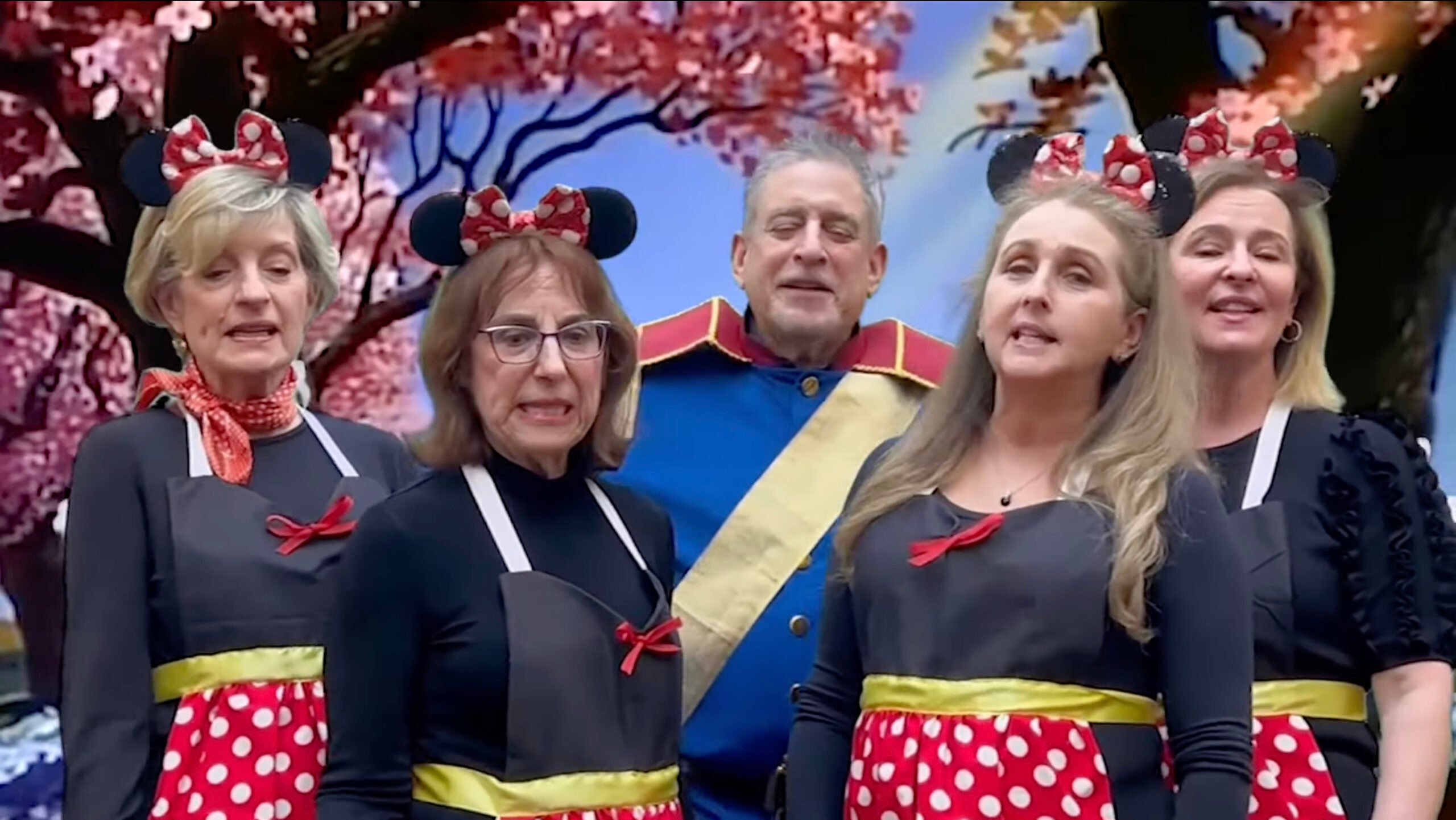 But now with this war, Elena Schwartz says it’s important to try to keep Ukrainians in business, no matter their religion. Many American companies, especially in the tech sector, employ contractors in Ukraine, whose livelihoods are at risk because the war has disrupted their ability to work.

“We’re hopeful that things will get better still,” Elena Schwartz said. “And then the war will end and they will rebuild the country and we will do what we can to help them.”

Tabunshikova was not available for comment. Kharkiv remains hard hit by Russian assaults; a 96-year-old Jewish man who survived four Nazi concentration camps eight decades ago was among those killed in recent fighting.

But Sergei Schwartz said he knew one point she’d make — and he wanted to pass it on.

“She was very, very reluctant to present her as, I don’t know, as a hero,” he said. “She doesn’t see it like this.”

—
The post How a childhood friendship in Ukraine led to an American Purim spiel produced under siege appeared first on Jewish Telegraphic Agency.