Holocaust rescuer gets a surprise 100th birthday party in Poland 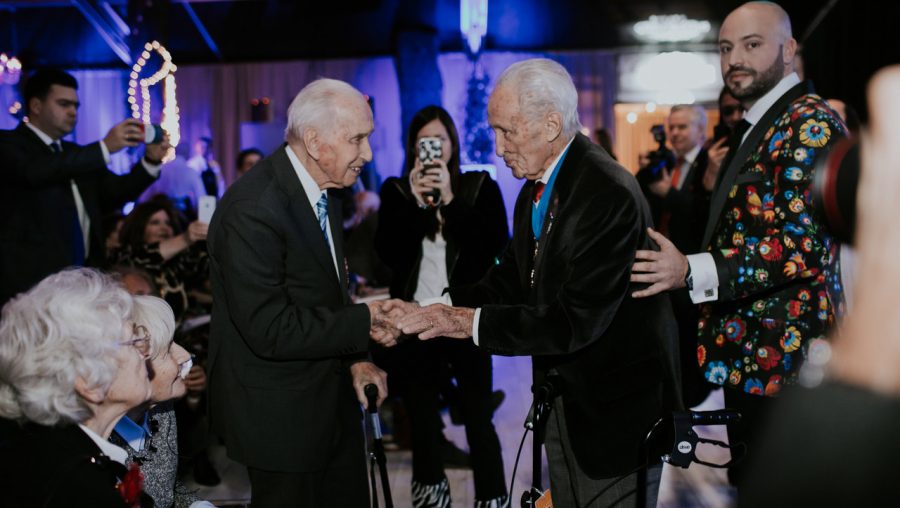 Jozef Walaszczyk, left, is greeted by Edward Mosberg, center, and Jonny Daniels at his 100th birthday celebration in Warsaw, Poland, Nov. 14, 2019. (From the Depths)

(JTA) — The day after he turned 100, Jozef Walaszczyk prepared to attend yet another Holocaust commemoration ceremony in his native Warsaw.

Walaszczyk is Poland’s oldest living Righteous Among the Nations – a title given by Israel’s Yad Vashem Holocaust museum to non-Jews who risked their lives to save Jews during the Holocaust – and he attends several such events each year. But he was in for a different experience when a Ferrari pulled up to his apartment building Thursday to take him to the event.

After some negotiation on Walaszczyk’s part to get into the sports car’s famously low frame, he was driven to a birthday gala organized to honor him and 19 other rescuers from Poland, Belarus, Albania and beyond.

“I was so surprised and honored that all of this was done for me,” Walaszczyk told reporters waiting for him at a restaurant inside the famed Zamoski Palace. He called it “the best surprise I have ever gotten in my life.”

As the foreman of a factory outside Warsaw, Walaszczyk helped protect 30 Jews after the Nazis invaded, according to Yad Vashem. Then he took a Jewish woman sought by the Gestapo into his home and arranged false papers for her.

The woman, Irena Front, was subsequently arrested. Walaszczyk bribed police to release her and 20 other Jews, some of whom moved into his apartment. He hired a maid to take care of them in hiding. When they were arrested in 1944, Walaszczyk again intervened to get them out and housed them in a rural hiding place. He continued to support them after the war ended.

“I did what I did because it was the right thing to do,” he said at the birthday bash. “I never did it thinking of credit or praise.”

Edward Mosberg, a 93-year-old Holocaust survivor from New Jersey and honorary president of From the Depths, the Holocaust commemoration group that hosted the gala, traveled to Warsaw under medical supervision due to cancer treatments to attend the event.

“These heroes did something that most of us would never do,” Mosberg said, “so for me to come to Poland and have an opportunity to spend time with them is an honor and privilege.”

Jonny Daniels, the 33-year-old Israeli activist who founded From the Depths in Poland in 2014, said his generation especially “must do all we can to show our honor and respect to rescuers whilst we still can,” calling people like Walaszczyk “a beacon of light in a time of absolute darkness.”