The programs in the umbrella group continue to operate, including Alexander Muss High and programs run by Young Judaea, BBYO and Nativ, the Conservative movement’s gap-year program. The coalition’s  shutdown was announced in January, although it was little noticed outside of philanthropy circles.

According to Gideon Shavit, the founder and one-time co-chairman of Lapid, partnerships with the coalition were rejected by numerous donors, the Jewish Agency for Israel and the Israeli Ministry of Diaspora Affairs.

However, “the field of teen travel is not at all dead,” Sarah Vanunu, the former director of communications for Lapid, said in an email. “Trip providers are still in full operation and the programs are all running.”

Some 12,000 to 15,000 participants come every year on high school programs to Israel, according to Shavit and others involved in Lapid — down from over 20,000 participants in 2000. Vanunu insisted that Lapid’s closure had nothing to do with the decline in numbers.

“Lapid was forced to shut down purely as a result of the Jewish Agency and the [Israeli] government not putting serious enough attention into supporting and investing in the high school teen programs and reneging on previous commitments to support them,” she said.

In an email to JTA, Yigal Palmor, director of communications and public affairs at the Jewish Agency, defended the institution’s commitment to Lapid.

“The Jewish Agency has invested time, money and human resources in order to help Lapid develop programs that might draw eventual financial support from the Diaspora Ministry or from philanthropists,” Yigal said. “At no point did the Jewish Agency pledge funds to Lapid, and this vague accusation of reneging on alleged commitments is totally groundless.”

Everybody “focuses on Birthright,” Shavit said.

Shavit, the former CEO of Alexander Muss, created Lapid in 2008 as a way to rally the Jewish world to subsidize program costs and boost enrollment in the high school and gap-year programs for Diaspora youth. According to Shavit, over the course of a decade the coalition raised only $500,000 and was unable to lower program prices.

“The last year we realized that we are going nowhere,” Shavit said. “After 10 years nothing happened. The Jewish community doesn’t care about the high school programs.”

Robert Lappin, president of the Lappin Foundation, a founding member organization of Lapid that fully subsidizes teen trips to Israel from the North Shore of Massachusetts, also lamented what he called a lack of national support of high school programs in Israel.

“A teen Israel experience before college provides the background, and ample time, up to two years, for teens to learn how to advocate for Israel, something that Birthright Israel is not able to do, given that Birthright Israel trips take place after a young adult’s college experience has started,” Lappin wrote in a 2014 study commissioned by his foundation about the effect of teen trips. 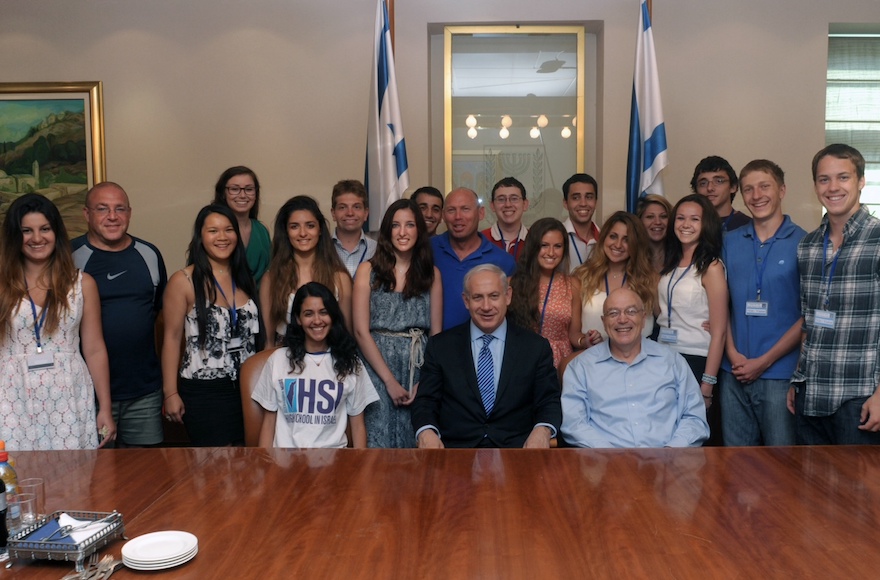 Gideon Shavit, the founder and one-time co-chairman of Lapid, is shown to the right of Israeli Prime Minister Benjamin Netanyahu. Adelson School Las Vegas teenagers visited the prime minister in the Knesset. (Courtesy of Vanunu)

Shavit and others argued that “the leaders of the Jewish community and philanthropy community are going to the wrong direction” by ignoring longer-term engagement of Jews under the age of 18.

Stephen Muss, a one-time honorary chairman of Lapid, in speaking with JTA would only describe Lapid’s failure as a “painful series of events.” But in eJewishPhilanthropy.com in 2011, he wrote about the need for pre-college programs like his.

“With the current set-up, the Jewish community is losing masses of teens who can engage with Israel earlier while still with family and community,” he wrote. “Fewer Jewish teens are entering college with readiness and motivation to be engaged with Israel, and not enough is being done about it.”

Lapid’s leaders aren’t the first in the Jewish world to complain about Birthright’s impact on programs in Israel.

Taglit-Birthright began operating trips in 1999. Now over 48,000 participants come annually on the program, according to Birthright’s website — and over 600,000 since its founding, including Israelis.

Lapid and others say the free trips suppress interest in paid trips — as did a one-time policy, since relaxed, that disqualified students from Birthright trips if they had already visited Israel on an organized program.

“Due to Birthright’s financial weight and the sheer numbers of participants produced by their recruitment strategy, Federations and trip organizers who work in the Israel Experience field are diverting energy for planning and programming away from high school programs,” a Jewish Agency study of the Israel experience field said in 2009.

“Of course, that was never really true because once Taglit came into the world, people made their calculations, and they could have had a very strong Jewish background, but say ‘I’m not gonna piss away $9,000 when I can go with my friends on a 10-day trip and another week of extension,’” he said.

High school programs can cost anywhere between $8,250 (the standard rate for six weeks in Israel with Alexander Muss) and $52,500 (the cost for a year in Israel while visiting Jewish communities around the world with Kivunim).

When the second intifada hit in 2001-02, high school programs were decimated. Afraid of the terror attacks, riots and unrest in Israel, parents opted to keep their children at home, and for some programs participant numbers dropped to single digits or even to zero.

“In the world of Lapid, four years is a generation, a generation of high school kids,” said Doron Krakow, president and CEO of the JCC Association of North America and former national director of Young Judaea.

Birthright had continued to operate during the intifada, bringing more participants every year and becoming the quintessential Israel trip for young Jews.

Supporters of the high school programs say they still have value, especially given statistics on waning attachment to Israel among American Jews and alienation from institutional Jewish life.

“You don’t have to be a demographer or statistician to see what the state of the traditional architecture of North American Jewish life is. It’s a lesser version of its former self,” said Krakow, who had been on the board of Birthright at the beginning stages of the organization.

“Birthright has been remarkable, but 20 years on, federation campaigns are waning, synagogue membership is waning, the inmarriage-outmarriage statistics are less favorable than they were 20 years ago. An argument can be made that maybe things would be even worse were it not for Birthright, but the intention of Birthright was that things should be better.”

Birthright’s Mark stood by the success of his organization’s numbers and impact.

“Many things in the Jewish world are going down,” he said. “The one thing which is positive, that went up dramatically over the last 18 years, is the increase of 400 percent of the number of young Jews visiting Israel on an educational trip.”

Mark pointed out that participation in religious life is shrinking around the world, and how, with the internet, “there are more young Jews around the world who are engaged with other Jews today than there were 20 years ago.”

Because of this and studies that show a “Birthright bump,” where participants are more likely to marry other Jews and be involved in Jewish life than those who have not been on Birthright, “I’m not so gloomy and I’m not so pessimistic,” he said.

Krakow, a longtime member of Lapid, thinks that an emphasis on numbers favor programming with mass appeal over those with deep impact.

The Jewish philanthropic world “chose to let the market lead them,” he said in regard to Birthright.

Longer Israel trips are a harder sell due to cost and length, Krakow says, but are more necessary and have more impact due to the length of high school programs and how formative teen years are for Jewish identity.

Sociologist Steven M. Cohen, who has done research for Lapid and Birthright, said both short- and long-term programs have merit.

“Whether conducted at age 16-17, or 18 and beyond, trips to Israel promote in-marriage, raising children as Jews, attachment to Israel, Jewish friends and dating, and numerous elements of Jewish engagement, association, and affiliation,” Cohen, a professor of Jewish social policy at Hebrew Union College-Jewish Institute of Religion, wrote in the 2014 study for the Lappin Foundation, which he helped conduct.

“In our view, if Birthright for ages 18-26 is effective and deserving of support (and it is), so too are teen trips to Israel.”

Many students, like Jay, who asked that his real name not be used, are weighing their options.

A high school senior in Minnesota, he is scrambling for scholarships to cover the over $40,000 tab asked by Yozma, a Nativ gap-year program for students with cognitive and social challenges. Typically a year in Israel with Nativ costs approximately $26,000.

“If it ends up that I can’t get enough scholarship money to go,” Jay said, “I want to do Birthright.”