As soon as it became clear in March that COVID-19 would force school closures around the country, Jewish day school administrators faced a conundrum that went beyond the question of how to continue educating students.

The challenge: how to maintain a sense of community at a time when everyone was shuttered at home. Community is one of the raisons d’etre of Jewish day schools, and often why families stretch themselves financially to afford them. With everyone apart, what could schools do to alleviate the sense of isolation and stress among staff, students and families?

For Yeshivat Noam, a Modern Orthodox elementary school in northern New Jersey with some 800 students, the challenge of commencement exercises brought those questions to a head.

“We didn’t want the class of 2020 to conclude as someone clicks ‘end meeting’ on a Zoom screen,” said Rabbi Chaim Hagler, the head of school.

So the school built a parade float festooned with Israeli and American flags and labeled “Bringing Graduation Home” that traveled to the houses of each graduating eighth-grader for surprise commencement ceremonies. Family members, neighbors and friends gathered in lawn chairs to watch as their local graduate, decked out in cap and gown, received their diploma while “Pomp and Circumstance” played.

“COVID-19 was trying to say: ‘Let’s not let these guys have a graduation,’” Hagler said in one of his speeches to a graduate. “But we said, ‘No way!’”

Staff used a leaf blower to scatter confetti, loudspeakers to blast music and a Nissan Titan pickup truck to pull the “Class of 2020” float. To get around social distancing measures, each student posed for pictures with a life-size cutout image of the principal.

“The kids were thrilled, so excited,” Hagler said. “Basically, each one had their own individual opportunity to be recognized as special.”

The school conducted 85 of these ceremonies over two days.

It was one of the myriad ways that Jewish day schools nationwide used the pandemic not just to adopt creative methods of teaching, but to maintain the sense of community that underpins the schools. 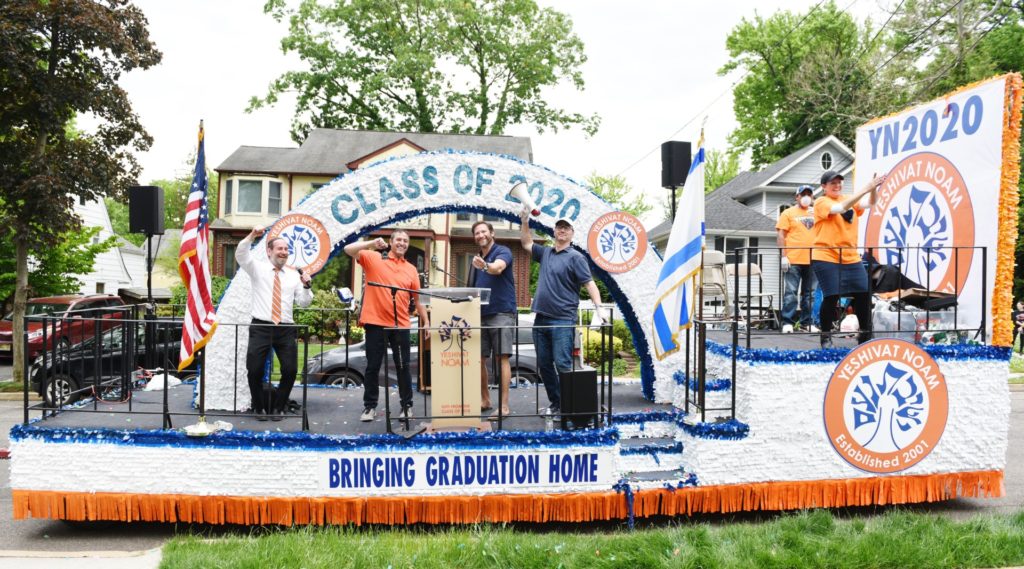 Yeshivat Noam, a Modern Orthodox school in Paramus, N.J., organized a graduation float that visited students’ homes so that members of the class of 2020 could celebrate safely amid the coronavirus pandemic. (Courtesy of Yeshivat Noam)

“That’s a feature of day schools — that community is strong, that we connect a lot — and I think it’s been vital to how day schools have gotten through this successfully,” said Paul Bernstein, the CEO of Prizmah: Center for Jewish Day Schools.

Bernstein’s own children attend the Leffell School, a two-campus K-12 institution in suburban Westchester County, New York. Earlier this year, Leffell turned its spring fundraiser into the Bathrobe Ball, a free online event with a live auction, an interview with comedian and alum Nick Kroll, and musical entertainment by singer Neshama Carlebach, a school parent. The school enlisted a catering service to make fancy reheatable TV dinners that some 700 attendees ordered and picked up in advance.

“Community is a major value for us anyway, so how do you expand that sense of community and maintain it even when you can’t be physically together?” said Michael Kay, Leffell’s head of school.

While being physically remote represented a challenge, using Zoom enabled the school to connect in ways it had never considered. Leffell held schoolwide Zoom sessions for the services that bookend the Sabbath, Kabbalat Shabbat on Friday night and Havdalah on Saturday night. Grandparents were invited to join, which hadn’t really happened before. The school did a series of lunch-and-learns for adults. It even launched a music program for toddlers — to build ties with future students, Kay said.

“Families parked on the street during it, and then after they didn’t want to leave,” said Jen Minkus, the school’s marketing and communications associate. “The school is in a very diverse area, and we had so many Israeli flags and had Israeli music blasting, and there were cars driving by that weren’t from our school who were honking and waving.”

For Yom Yerushalayim, which celebrates the liberation of the Old City of Jerusalem in the 1967 Six-Day War, the Striar Hebrew Academy in suburban Boston created an interactive game on Zoom in which students joined their grandparents in “break-out rooms” for games and activities.

“Grandparents called with tears saying ‘We hadn’t been able to see our grandkids,’” recalled Rabbi Jordan Soffer, the head of school at Striar, which has students in pre-K through the fifth grade. 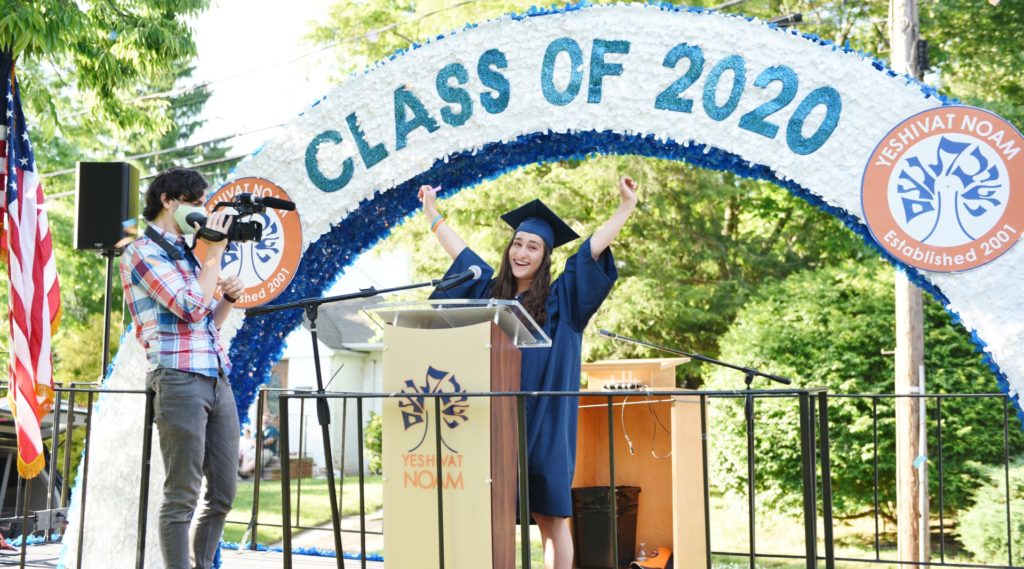 Hailey Diamond celebrates her 2020 graduation from the eighth grade on the Yeshivat Noam float. (Courtesy of Yeshivat Noam)

By contrast, marking Yom Hashoah, Holocaust Remembrance Day, posed a challenge. Striar held a Zoom meeting in which students listened to a memorial siren and a reading of “The Butterfly,” a poem written by Pavel Friedmann, a Czechoslovakian poet who died at Auschwitz. The poem ends, “Butterflies don’t live in here/In the ghetto.”

“We had everyone go out in their own homes and decorate a butterfly and hang it in their window and write ‘Butterflies live here,’” Soffer said.

Students from other day schools who heard about the initiative, as well as the local police department, put such signs in their windows, too.

At the Manhattan-based Yeshiva University High School for Boys, or MTA, school officials made a conscious effort to avoid words or phrases that imply remoteness. Rather than “remote learning,” for example, the school inaugurated the “MTA at home” era and spoke of being “socially appropriate” rather than socially distant.

Meanwhile, there was a full roster of gradewide and schoolwide programs. MTA hosted a special Zoom dinner for seniors. Faculty surprised students with in-person visits, delivering goodie bags to graduates’ homes. As at other schools, there was a Zoom color war.

“The goal was, how can we maintain a sense of community?” said Rabbi Joshua Khan, MTA’s head of school. “Yes, we want social emotional growth and academic growth, but it is all related to community.”