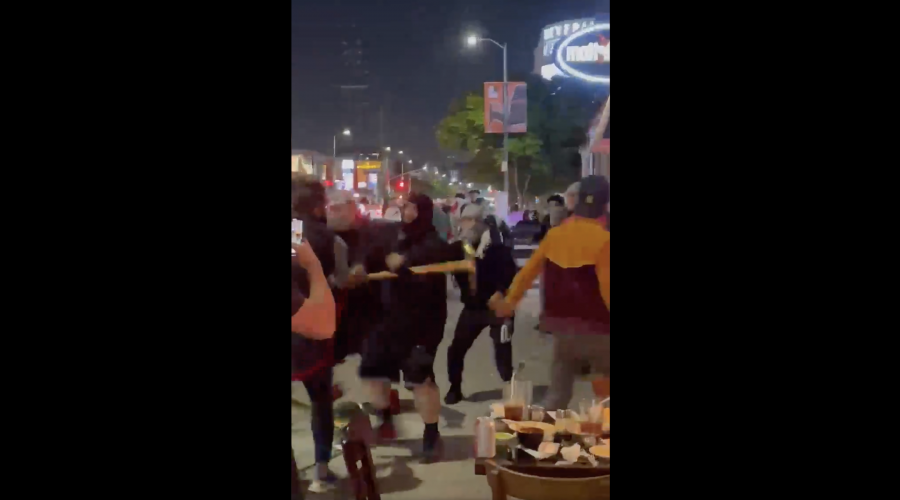 Pro-Palestinian demonstrators are captured on cellphone video physically attacking Jews at a restaurant in Los Angeles, May 18, 2021. (Screenshot)

(JTA) — Two men involved in a brawl at a Los Angeles restaurant in May, whose viral footage was widely viewed as an example of rising antisemitism during the recent conflict in Israel and Gaza, now face hate crimes and assault charges.

On May 18, the suspects, Xavier Pabon, 30, and Samer Jayylusi, 36, approached a West L.A. sushi restaurant by car as part of a pro-Palestinian protest caravan, announcing “Israel kills children” via a loudspeaker. The cars stopped at a red light near a group of Jewish diners. L.A. County prosecutors accuse the men of then taking part in beating up a diner who swung a metal stanchion at them.

Video of the fight went viral on social media and was seen as symbolic of a spike in antisemitism in the United States surrounding the May conflict between Israel and Hamas in Gaza. Multiple Jewish security organizations recorded increases in reports of antisemitic incidents that month.

The men have each been charged with two counts of assault and a hate crime.

“A hate crime is a crime against all of us,” L.A. County District Attorney George Gascón said in a statement on Tuesday. “My office is committed to doing all we can to make Los Angeles County a place where our diversity is embraced and protected.”

Earlier this year, a lawyer for Pabon, Mark Kleiman, told the Forward that his client was not driven by antisemitism and said he was acting in self-defense.

Eyewitnesses accused the protesters of shouting antisemitic slurs, including asking who was Jewish, which Kleiman denied. The protesters and the diners both accused each other of instigating the fight by throwing glassware.