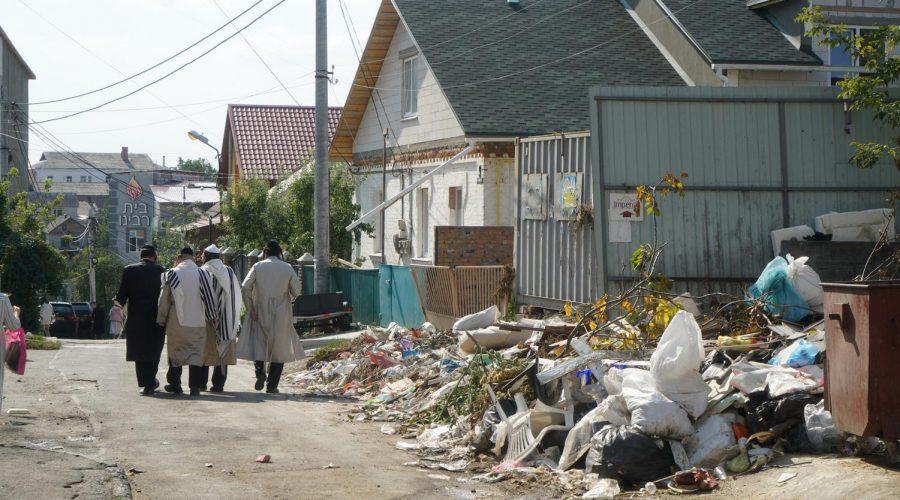 Jewish men walk down a street in the Pushkin area of Uman, Ukraine on ‎Sept. ‎9, ‎2017. (Cnaan Liphshiz)

Passengers on at least two flights from London and Paris were prevented from entering the country, according to reports. The flights were full of Israeli and American haredim. Another group of followers attempted to cross into Ukraine from Belarus but were detained.

Ukraine last week closed its borders to foreigners until at least Sept. 28, which is Yom Kippur.

The Israeli government is working to figure out how to allow some Israelis to make the trip, even as the country’s coronavirus czar says the pilgrimage should not take place amid the coronavirus pandemic and would-be pilgrims are protesting Prime Minister Benjamin Netanyahu over his efforts to minimize this year’s journey.

Each year, tens of thousands of pilgrims, mostly from Israel, have gathered for the Jewish New Year in Uman, home to the burial place of Rabbi Nachman, an 18th-century luminary and founder of the Breslov Hasidic movement. During his lifetime the rabbi had called on his followers to be with him on Rosh Hashanah.

Rabbi Yaakov Jan, the rabbi of Uman, told Israel Hayom that 2,000 pilgrims already have made it to the city and that the ones who are there are wearing masks and following social distancing regulations. He said the decision to ban the pilgrims has led to “chaos.”

“It would be wiser to set guidelines and let the Hasidim use their common sense,” the rabbi said. “Instead they acted impetuously and prohibited everything. It is so painful, I am heartbroken by this.”