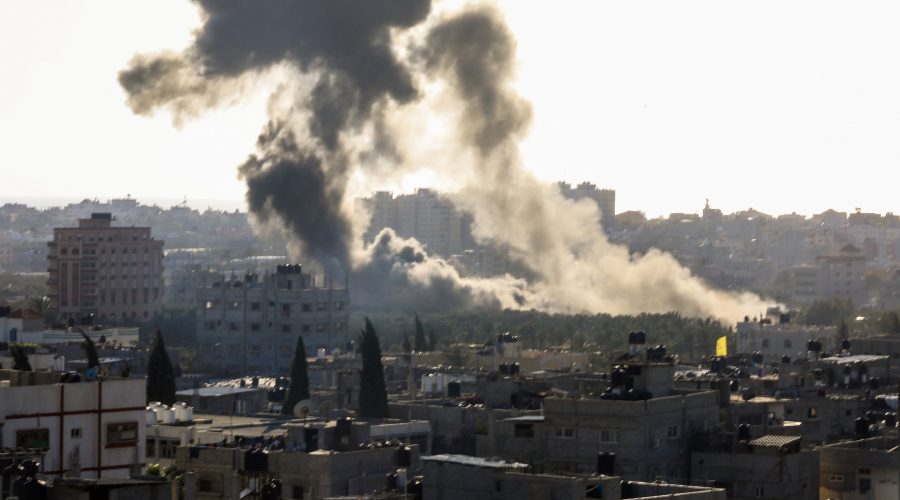 Smoke rises following an Israeli airstrike in the Gaza Strip, May 4, 2019. (Hassan Jedi/Flash90)

(JTA) — Israeli airstrikes killed a Hamas official and eight others, including three children, on Monday night, Palestinian sources said. The Israeli Air Force actions were in retaliation for rockets fired earlier the same day from Gaza into Jerusalem and elsewhere.

An Israeli man suffered minor injuries in an attack for which Islamic Jihad took credit.

The Hamas official, Mohammed Abdullah Fayyad, was killed in the northern Gaza Strip, according to the Iranian Al-Alam television station, which cited unnamed officials in Gaza. Al-Alam identified Fayyad as a commander of the Izz ad-Din al-Qassam Brigades, Hamas’ military wing.

Maan, the Palestinian news agency, reported that three children were among the dead. At least one missile shot from an Israeli drone or helicopter hit a motorcycle near the Al-Taqwa Mosque in the town of Beit Hanoun, creating an explosion that killed Fayyad and the others, according to the reports.

Israel killed dozens of Hamas personnel and leaders from other Palestinian factions during the five-year second intifada, which ended in 2005. It has resumed targeted killings during periods of escalations but limited the use of the controversial policy between conflagrations.

In a previous targeted strike, Israel killed Baha Abu al-Ata, a leader of Islamic Jihad Movement in Gaza, in 2019.

The strikes Monday followed the launching of multiple rockets into Israel amid clashes between Palestinian rioters and security forces in Jerusalem.