Gross advocates press for consideration of some Cuban Five demands 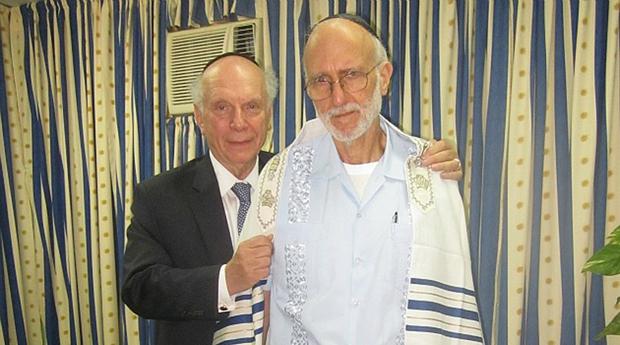 WASHINGTON — Advocates for Alan Gross say talk of a trade with the “Cuban Five” is a non-starter, but acknowledge hopes that the Obama administration will consider lower-level concessions for the five Cuban spies in exchange for Cuban considerations for the jailed American.

Insiders say that Gross’ advocates want the United States government to consider, among other measures, more family visits for the Cuban Five, agents who were arrested in 1998 and convicted in 2001 on espionage-related charges, and the permanent return home for the one among them who is now out of jail and serving probation.

The Cuban government recently came closer than ever to making explicit that the fate of the Cuban Five factors into its considerations of whether to release Gross, the  State Department contractor who is in jail on a conviction stemming from his efforts to connect Cuba’s small Jewish community to the Internet.

Gross, who is Jewish, was arrested in 2009 and sentenced last year to 15 years in prison.

“We have made clear to the U.S. government that we are ready to have a negotiation in order to try and find a solution, a humanitarian solution to Mr. Gross’ case on a reciprocal basis,” Josefina Vidal, the top official in the Cuban Foreign Ministry handling North America, said in a May 10 interview on CNN.

Vidal would not offer specifics, but prompted by interviewer Wolf Blitzer, she said the Cuban Five were a concern.

“Cuba has legitimate concerns, humanitarian concerns related to the situation of the Cuban Five,” she said.

“There is no equivalence between these situations,” Victoria Nuland, the State Department spokeswoman, said in remarks to the press the day after the interview. “On the one hand, you have convicted spies in the United States, and on the other hand, you have an assistance worker who should never have been locked up in the first place. So we are not contemplating any release of the Cuban Five, and we are not contemplating any trade.

“The continuing imprisonment of Alan Gross is deplorable, it is wrong, and it’s an affront to human decency. And the Cuban government needs to do the right thing.”

On background, a source apprised of the dealings among Gross’ advocates, the U.S. government and the Cubans says that Gross’ advocates are willing to press for visits by the wives of two of the Cuban Five, Rene Gonzalez and Gerardo Hernandez.  The U.S. has refused visas multiple times for the women, and Amnesty International has taken up their cause.

Another possible “give,” according to the source: a permanent return to Cuba for Gonzalez, who is out of jail and serving probation in the Miami area.

It’s not clear what the Cubans would offer in return for such concessions, but it is likely they would draw protests from the Cuban-American community, including among stalwart pro-Israel lawmakers such as Rep. Ileana Ros-Lehtinen (R-Fla.), the powerful chairwoman of the U.S. House of Representatives Foreign Affairs Committee, who has rejected any leniency for the Cuban Five.

Ronald Halber, who heads the Jewish Community Relations Council of Greater Washington and has directed much of the national activism on Gross’ behalf, said he understands the “intensity” of the Cuban-American community’s response, but said that President Obama also should take into account the national interest.

“I do not believe that U.S. policy to Cuba can be held hostage by the Cuban community in Miami,” he said. “It’s American national interests that are at stake. They should be part of the conversation, I understand the intensity, although this intensity is more among the older generation, not the younger generation. Our government has to do what is in our interests.”

Gross’ family and his advocates in the organized Jewish community emphasize their agreement with Nuland’s premise: There is no equivalency between a contractor installing and training others in the use of communications equipment and five spies believed to be instrumental in the 1996 shooting of two small aircraft leafleting Cuba with pro-democracy messages, resulting in the deaths of four Cuban-American activists.

Additionally, Jewish leaders dismiss the notion of the release of five loyalists to the regime of the Castro brothers, reviled in the influential Cuban-American community, as simply not worth addressing. Three of the five were sentenced to life and one to 19 years.

Gonzalez, sentenced to 15 years, was released last year on a three-year probation.

“We’re not in a position to negotiate that and I don’t think the U.S. government is inclined to do so,” Malcolm Hoenlein, the executive vice-chairman of the Conference of Presidents of American Jewish Organizations, the community’s foreign policy umbrella, told JTA.

Instead, he said, “We are continuing to press the case in various fora directly and indirectly.”

Vidal’s ambiguity in her interview with Blitzer suggested that there may be measures short of release that would invite Cuban reciprocity on Gross’ behalf.

“I have to tell you that the situation and the conditions of the detention of Mr. Alan Gross are very much different from the conditions” of the Cuban Five, who claim to have spent periods in solitary confinement, she said.

Vidal noted that the mother of one died without seeing him since his imprisonment, and the wives of two have not been permitted to visit them in the United States.

Gross, who is held in a medical facility, has been visited by family, friends and Jewish leaders. He is allowed weekly calls to the United States.

Most recently he spoke with leaders of the JCRC of Greater Washington to thank them for leading U.S. advocacy on his behalf. Gross’ home is in Potomac, Md., a Washington-area suburb.

Gross, his family and his advocates want him to make a two-week visit to his 90-year-old mother, who is dying of cancer in Texas, after which he has pledged he will return to Cuba.

His family had voiced support for allowing Gonzalez to return home for two weeks to visit his brother. Gonzalez made the visit in March and has since returned.

Vidal said the two concessions were not equivalent.

“The cases of Mr. Gross and Mr. Rene Gonzalez, I have to tell you, are different,” she told CNN. “First, Mr. Rene Gonzalez, who is one of the Cuban Five, he served completely his term until the last day. Rene Gonzalez was not detained and was not imprisoned for attempting against U.S. national security.”

Those are the charges against Gross; Cuba says the Cuban Five were guilty only of spying on groups it considers as extremist and not on the U.S. government.

Cuba maintains that Gross’ activity on behalf of the Jewish community was a cover for installing sophisticated communications equipment. Gross has said the equipment is freely available in U.S. electronic goods outlets and online.

Such distinctions have frustrated advocates for Gross, who note that the family took the unusual step of advocating for allowing Gonzalez to visit his brother.

“We can certainly appreciate some of the humanitarian concerns facing the Five,” Peter Kahn, Gross’ American lawyer, told JTA in an interview. “In fact, we publicly urged that Rene Gonzalez be allowed to travel to Cuba to visit his critically ill brother. We only wish that the Cubans would reciprocate and allow Alan to visit his dying mother — we really don’t understand how they can be so cold-hearted in this situation if they sincerely mean what they say about dealing with Alan’s case on a ‘reciprocal humanitarian basis.’ ”

Halber of the Washington JCRC noted a new openness to Cuba under the Obama administration, which has facilitated travel between the two countries. President Raul Castro’s daughter, Mariela, is attending a conference this week in San Francisco.

Halber said the primary fault lies with the Cuban government for attempting to leverage Gross’ freedom to secure concessions for the Cuban Five.