Graffiti and fire in Jerusalem’s ‘greenhouse’ of Jewish-Arab coexistence 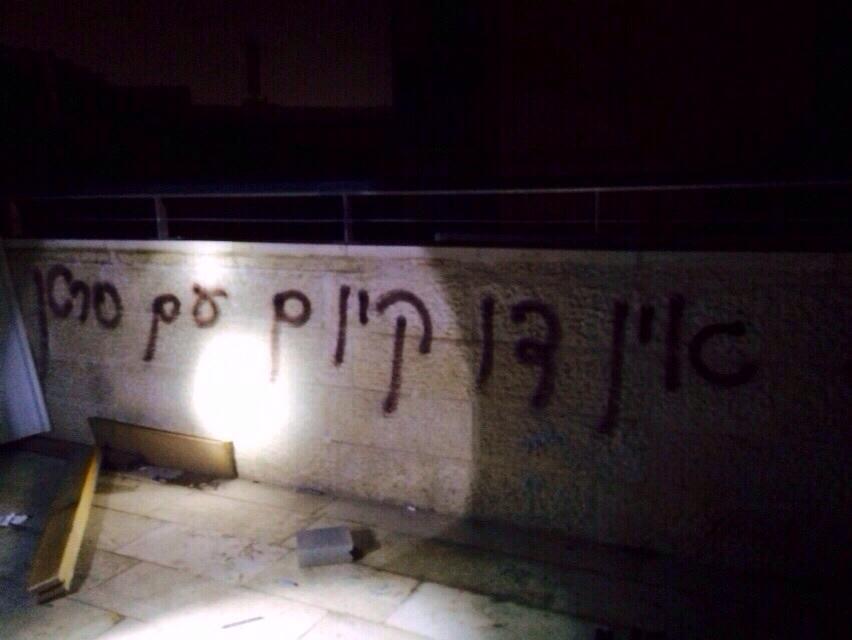 “There is no coexistence with cancer,” the graffiti reads. (Courtesy Hand in Hand)

Last week, the students of the Max Rayne Hand In Hand Jerusalem School were running through the hallways during recess, playing soccer in a courtyard and yelling to each other in Hebrew and Arabic.

Last night, they were helping rearrange the school after an arson attack.

Hand in Hand, Jerusalem’s only Jewish-Arab primary and high school, was vandalized and torched last night by Jewish extremists, who wrote slogans like “death to Arabs,” “down with assimilation” and “there is no coexistence with cancer” on the school’s walls. They set fire to two of the school’s first-grade classrooms, gathering schoolbooks and class materials in a pile and burning them. Jerusalem’s municipality responded swiftly, putting out the fire and sending teams to clean up the graffiti and classroom damage.

The school’s students and community are now figuring out how to overcome the attack during a year that — owing to a string of violent attacks in Jerusalem — has already been tougher than usual. This is the second time in about a month that vandals have graffitied “death to Arabs” on the school.

In a JTA profile of the school last week — which its principal called a “greenhouse” for shared Arab-Jewish living — students said that relations between Arab and Jewish students have been especially fraught. Students recalled tense debate in class and said that current events are a constant topic of conversation — but that they nonetheless manage to maintain friendships.

Noa Yammer, the school’s communications coordinator, told JTA that last night’s attack has served to draw the students together in opposition to racism and violence. On the night of the attack, 10th-grade students helped clear out one of their classrooms so first-graders could use it until their room was repaired.

“There’s a double reaction of feeling scared and feeling solidarity with each other,” Yammer told JTA the morning after the attack. “The kids were feeling comforted by the presence of all the other kids and the desire to help in any way they can. It’s not an attack on Arabs or Jews, but an attack on the fact that we’re living together.”

Yammer said that though parents are worried, all the students arrived at school today and that the school is trying to function as normally as possible. But at 9 a.m., students were joined by 500 supporters in a vigil organized by Light Tag, a coalition that opposes anti-Arab racism. Jerusalem Mayor Nir Barkat addressed the crowd and was joined by representatives of other Jerusalem schools.

Israeli Prime Minister Benjamin Netanyahu condemned the attack today at his weekly cabinet meeting, saying “we will act as vigorously – and with as much unity – as possible to restore quiet and law and order in all parts of the city.” Politicians from across the political spectrum joined him. Defense Minister Moshe Ya’alon tweeted that the vandalism was “terror for all purposes.”

Gadi Gvaryahu, Light Tag’s chairman, hopes such condemnations will translate into action against the vandals. He and Yammer both worry that the school will experience more vandalism, but hope that mobilization based on opposition to racism can prevent future attacks.

“It doesn’t interest us who wins elections,” Gvaryahu told JTA. “What interests us is that there won’t be hate crimes and racism. Every nation needs to stop its extremists, and if we think extremists are only on the other side, we’ll have more events like the one.”